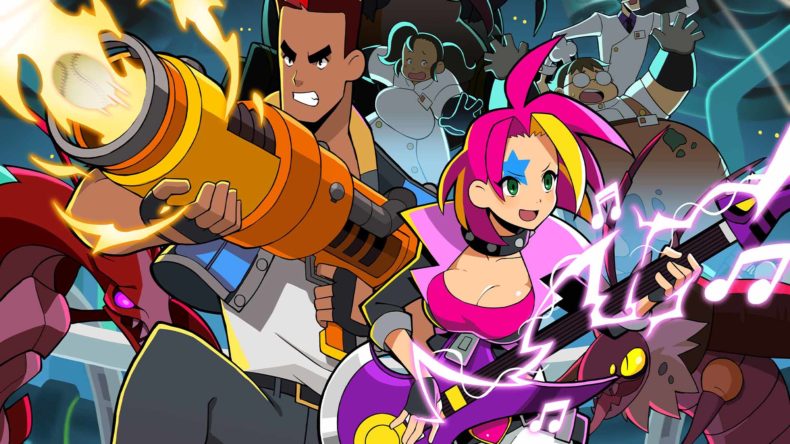 Wayforward have form with run and gun titles, having been responsible for the magical Contra 4 for Nintendo DS, a great rebirth for the franchise which I still regularly return to for my Neo-Gryzor fix. Spidersaurs is very much in the same wheelhouse as their earlier work, and marries the same kind of platform shooting mechanics to some nice Saturday morning cartoon-style worldbuilding, complete with a theme song that you could imagine singing along to with your cereal back in the day having just watched Biker Mice From Mars and Going Live.

With a bonkers plot about experiments with dinosaurs gone awry, the presentation is fantastic, with well-designed hand-drawn characters and enemies, that belter of a theme song, and a funny plot. Gameplay is very much in keeping with the developer’s experiences helming a Contra game and feels instantly familiar to anyone that has dipped into the Konami franchise. You run, you gun, you climb walls and hang from platforms and stuff just like Bill and Lance. 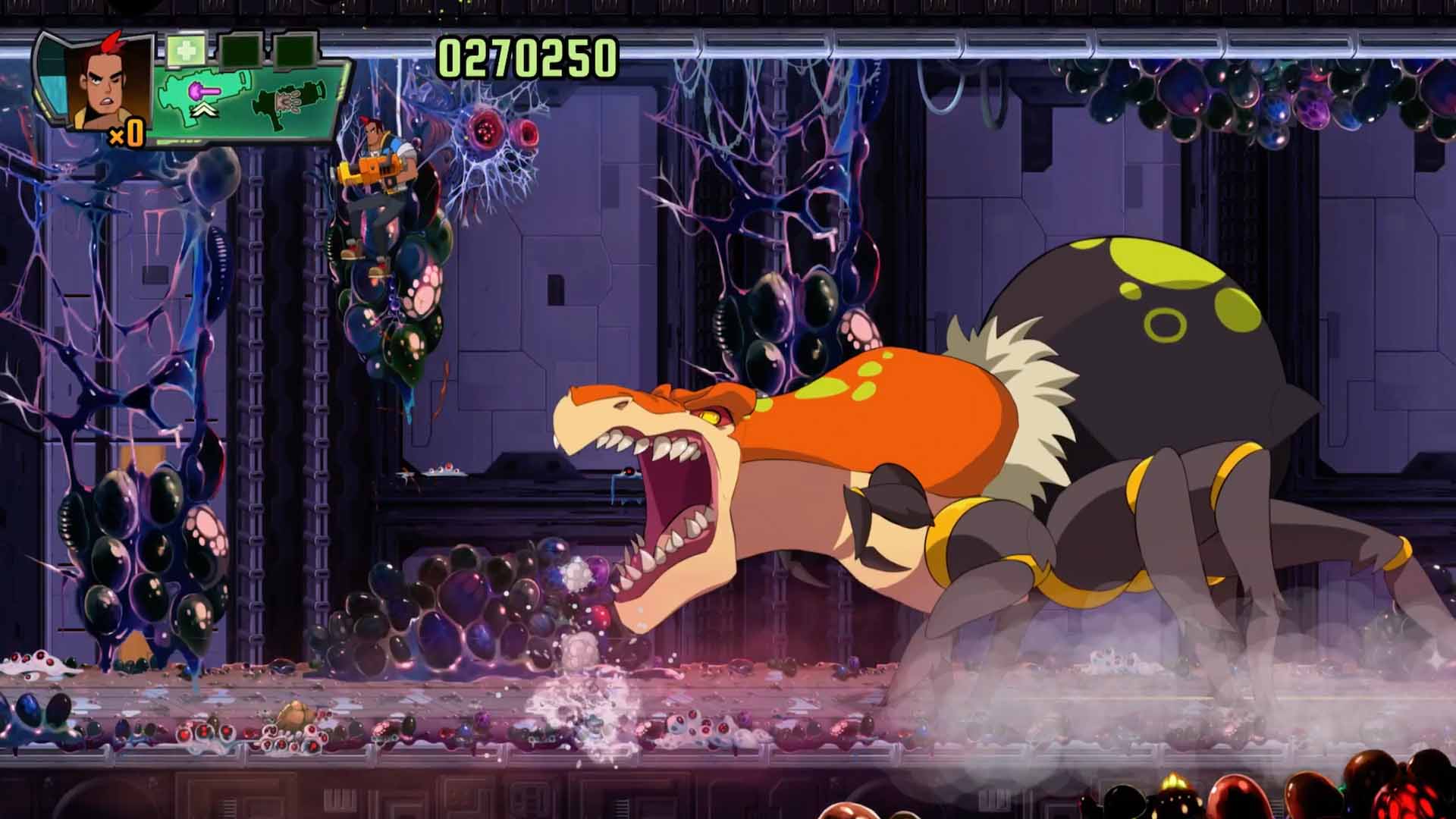 Unlike that iconic duo, Spidersaurs protagonists have different abilities in terms of their weapon loadouts. Punk rocker Victoria wields a guitar which when strummed dishes out a laser that can pierce through walls, or operate as a Contra-esque spread gun. Despite having a dull name, Adrian gets to play with a beefy flamethrower and a gun that splits into multi-directional shrapnel on impact. Both guns can be switched on the fly, and upgraded with the power ups dropped by baddies.

Each of the six stages is also conveniently split into two sections with a midpoint, giving you the opportunity, ostensibly, to switch between the two to get a level crushed. Also unlike its forebears, you get a bit of breathing space with an energy bar, allowing three hits before you die. How I could have done with that as I raged my young self through Hard Corps on the Mega Drive. 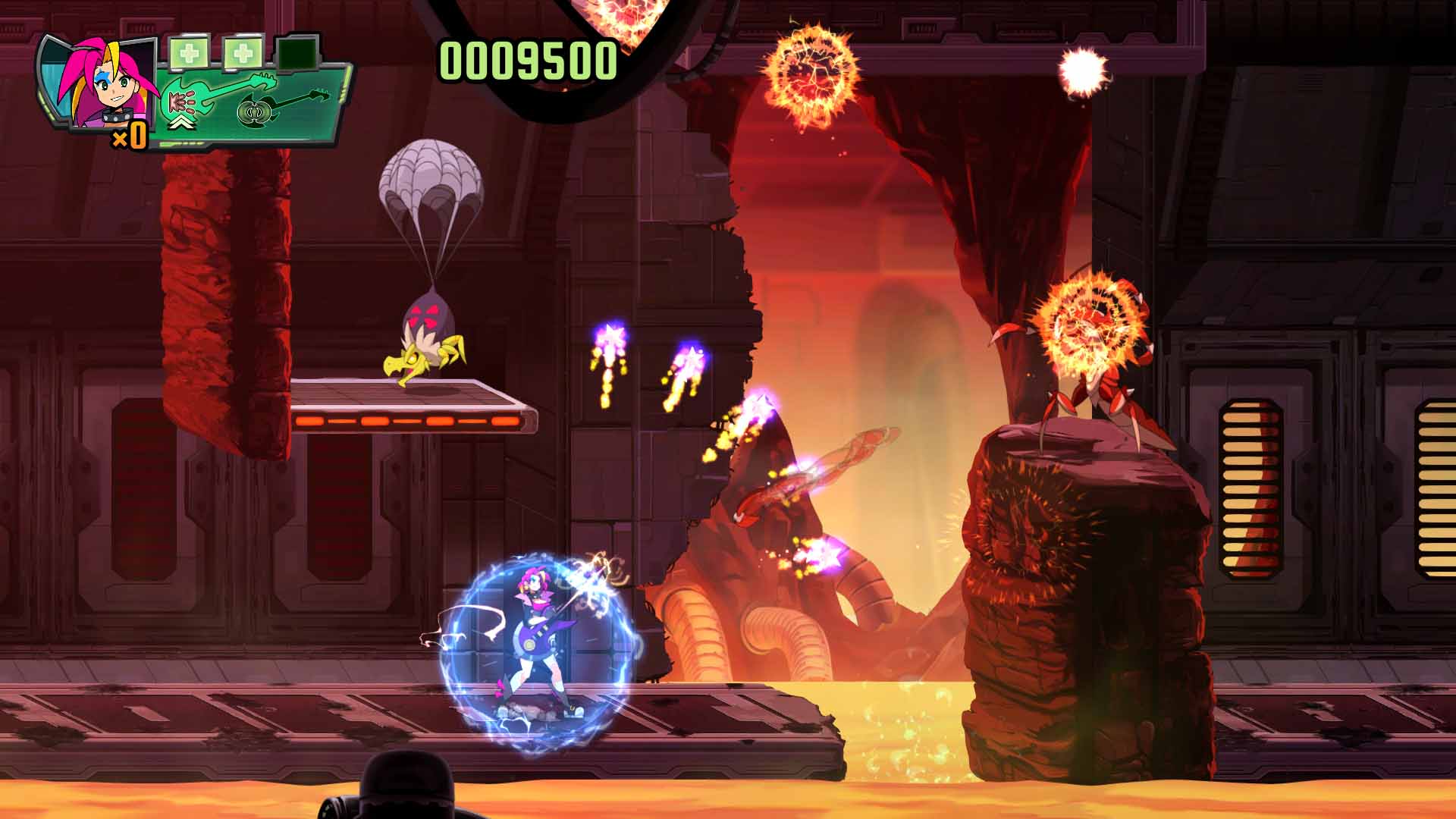 Completing each stage by defeating one of the imaginative, impressive bosses will grant you a new ability, such as enabling climbing of walls, or a double jump. Given how short the game is, it feels like these should have probably been included from the start. It was originally released as a mobile title for Apple Arcade, so the brevity is understandable, but it is a shame that the game hasn’t been fleshed out a little more for consoles.

You get the ability to play through from the start with all the unlockables once you have finished the game, but that is about it. The difficulty level is nowhere near as hostile and hardcore as the games that inspired it, and any fan of the genre worth their salt should breeze through it pretty quickly. Shattered Soldier, it ain’t. But it is loveable, looks fantastic, and by jove I would watch that Spidersaurs cartoon.

Short
Bereft of options and replayability

Spidersaurs is loveable, looks fantastic, and nowhere near as hostile and hardcore as the games that inspired it.