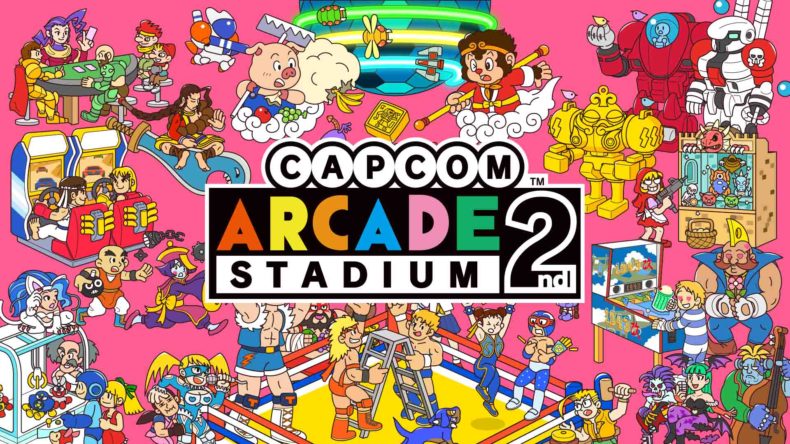 It goes against the very essence of my being to be negative towards Capcom – especially where their arcade games are concerned. But there is no denying that they have exploited retro nerds like me for what must span three generations of consoles now. They are now in a position where they are even doubling down on releases in the same year. Like the first Arcade Stadium, you can download the frontend for free, and even get a cheeky freebie thrown in just like before. In this case that gratis title is the slept-on SonSon, one of Capsule’s earliest games, but one which stands alongside anything else 1984 had to offer and an addictive, intuitive old school experience. You then have the choice to purchase the entire bundle of games – which I am reviewing here – or snaffle them up individually for just under two quid each.

There are some undeniable classics on offer in Capcom Arcade 2nd Stadium, even if you ignore those that have already had compilation releases recently. Appearing for the first time on a home console since the 16-bit era, Saturday Night Slam Masters is a corker. Combining 90s tropes from both US and Japanese wrestling, and sharing a crossover with Final Fight in the form of Metro City Mayor Mike Haggar, it remains a bold, colourful, immensely playable affair with a ton of moves to learn and grapplers to beat. 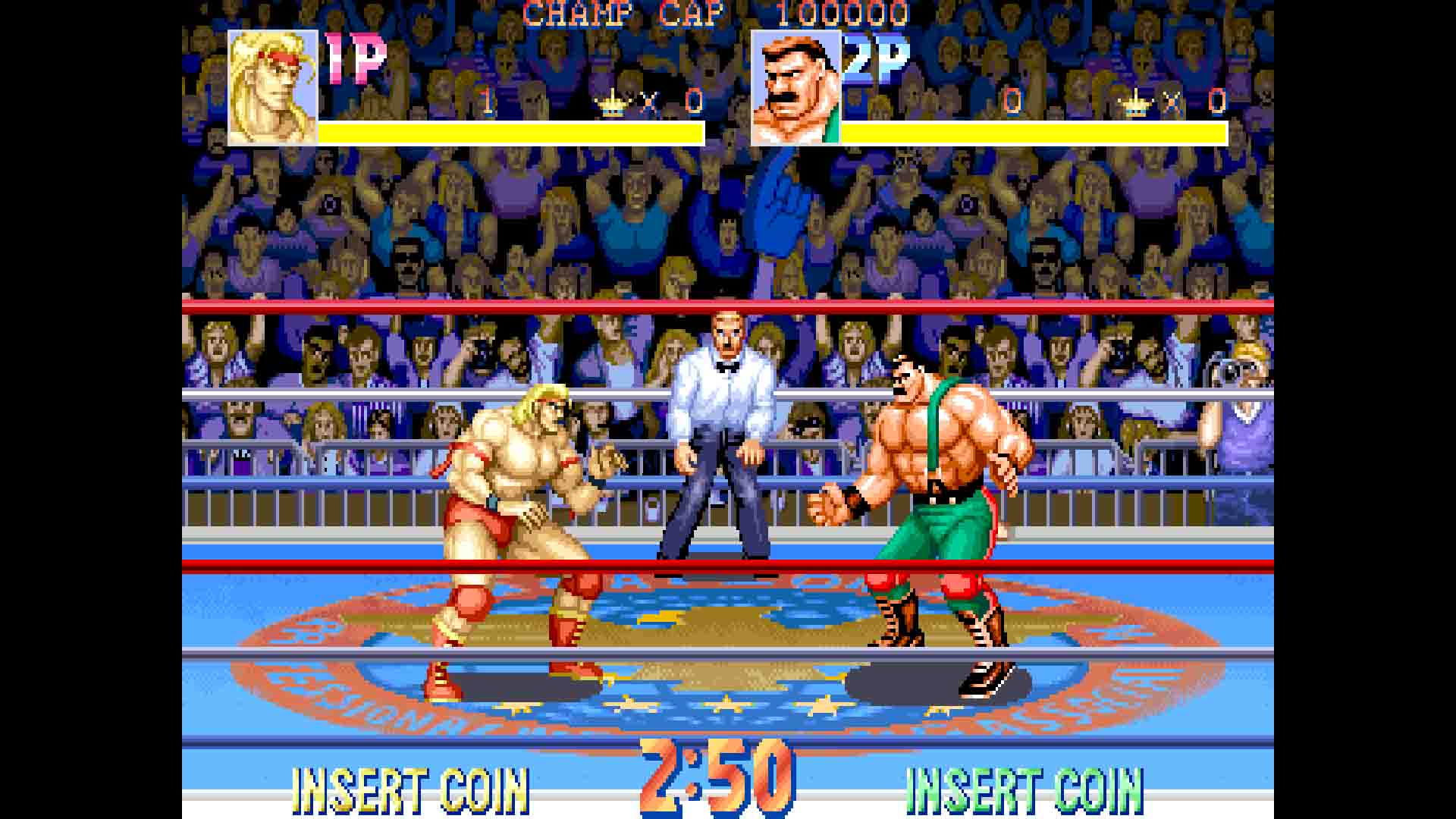 Continuing the Final Fight theme is L.E.D Storm – known in Japan as Mad Gear. It is a fine, frenetic racer that plays like a 2D, top-down F-Zero and throws all manner of obstacles, jumps and windy tracks at you. It is the superior of the two top down racing joints you can play here – with 1986 vehicular action title The Speed Rumbler coming off as poorly designed and awkward to control.

Three Wonders and Capcom Sports Club are both 3-in-1 compilations that are well worth your time. The latter combines a Willow-esque platformer in Midnight Wanderers; Chariot – a hori shooter that features the same cast of characters – and Don’t Pull – a fine puzzle title. Sports Club is the weaker of the two but still has a decent stab at arcade soccer and basketball and a very playable incarnation of tennis which is the best of the trio.

Capcom have great form for swords and sorcery and there are four excellent examples here. Magic Sword and Black Tiger are tremendous platformers with mild RPG elements, with the older Tiger being one of my most beloved arcade games as a kid. It has a distinctly arcane, gothic feel and plays well despite being 35 years old. It is incredible that the god-awful platform actioner Tiger Road, also included here, was released the same year. Belt scrolling beat ‘em ups King of Dragons and Knights of the Round need no introduction – as with nearly all examples of the genre Capcom delivered in the 90s, these look and play as beautifully as you remember. 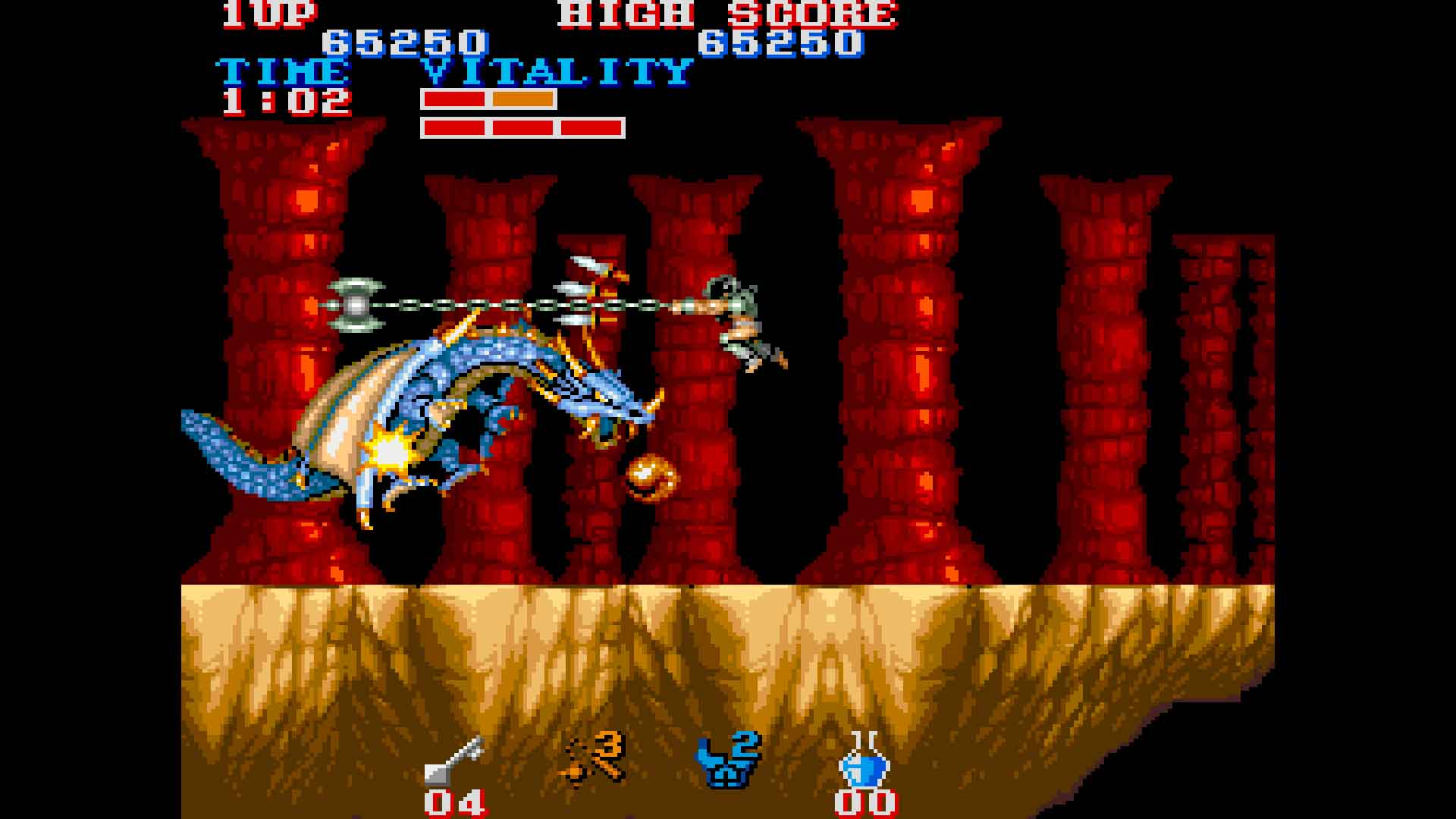 Shooter fan? The delightful looking Eco Fighters is the best on offer here, with a unique rotational mechanic, excellent ecolological story and great looks. Vertical-wise, Last Duel and the timeless 1943 Kai are also decent efforts. Nostalgia isn’t enough to save Hyper Dyne Side Arms in 2022, it is clunky and difficult to control, despite its iconic looks and Capcom feel. Exed Exes/Savage Bees is similarly dated, a vertical affair that isn’t even as good as Capcom’s own 1942, which came out a year earlier.

The poor quality doesn’t end there. I hated Avenger in 1987 on a French campsite, and I hate it now. Block Block is the underwhelming Breakout/Arkanoid clone you never needed. Gun.Smoke melds elements of the excellent Commando to the wild west and on paper sounds ace – in reality it is overly difficult and incredibly boring. Pnickies is a nice-looking but ultimately dull Japanese-only Puyo Puyo rip.

Much of the rest of Capcom Arcade 2nd Stadium is filled out with one-on-one titles of varying quality. All three Street Fighter Alphas and the most recognisable three Darkstalkers/Vampire games are included, along with Hyper Street Fighter II: Anniversary Edition, the sublime Super Gem Fighter Mini Mix and its puzzle counterpart Super Puzzle Fighter II Turbo. I don’t need to bang on about these as I looked at them recently on a separate compilation, but they are all classics that stand up to a pummelling all these years later. 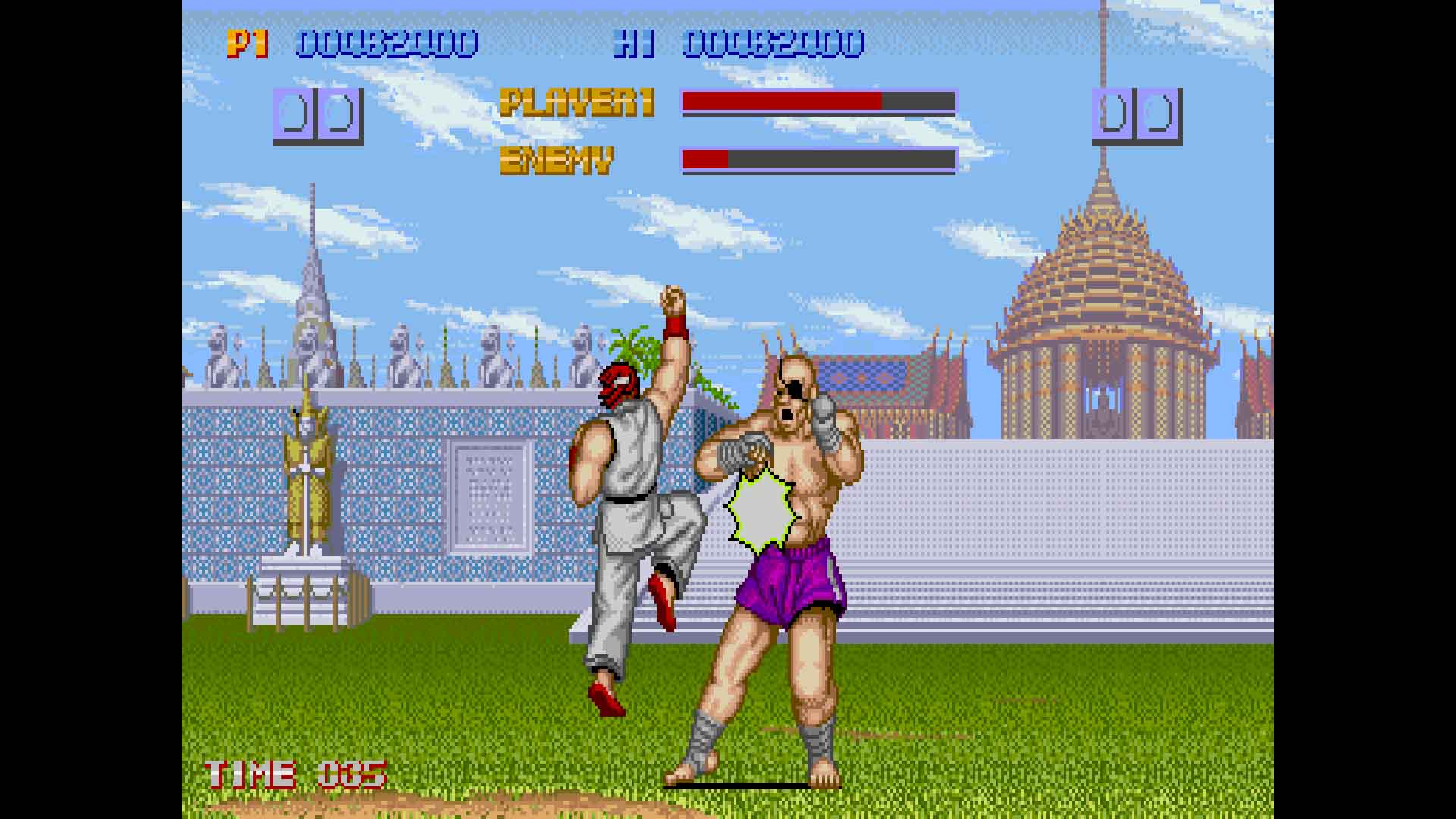 Not quite in the same category are the two Mega Man fighters included, which are bright and colourful and will appeal to fans of the blue cannon-wielding mascot, but just come off as lightweight and dull compared to the aforementioned titles. Street Fighter/Fighting Street is also included, presumably for nostalgia reasons, and is as unplayable as it ever was.

If you appraise Capcom Arcade 2nd Stadium for what it includes, ignoring whether or not the games are available elsewhere, then it is a beautifully presented package which includes a decent strike rate of two thirds bangers to a third of borderline unplayable turds. The way the games are framed within virtual arcade cabinets, the brilliant cartoon artwork that runs through everything, and the reverence to company history is second to none. 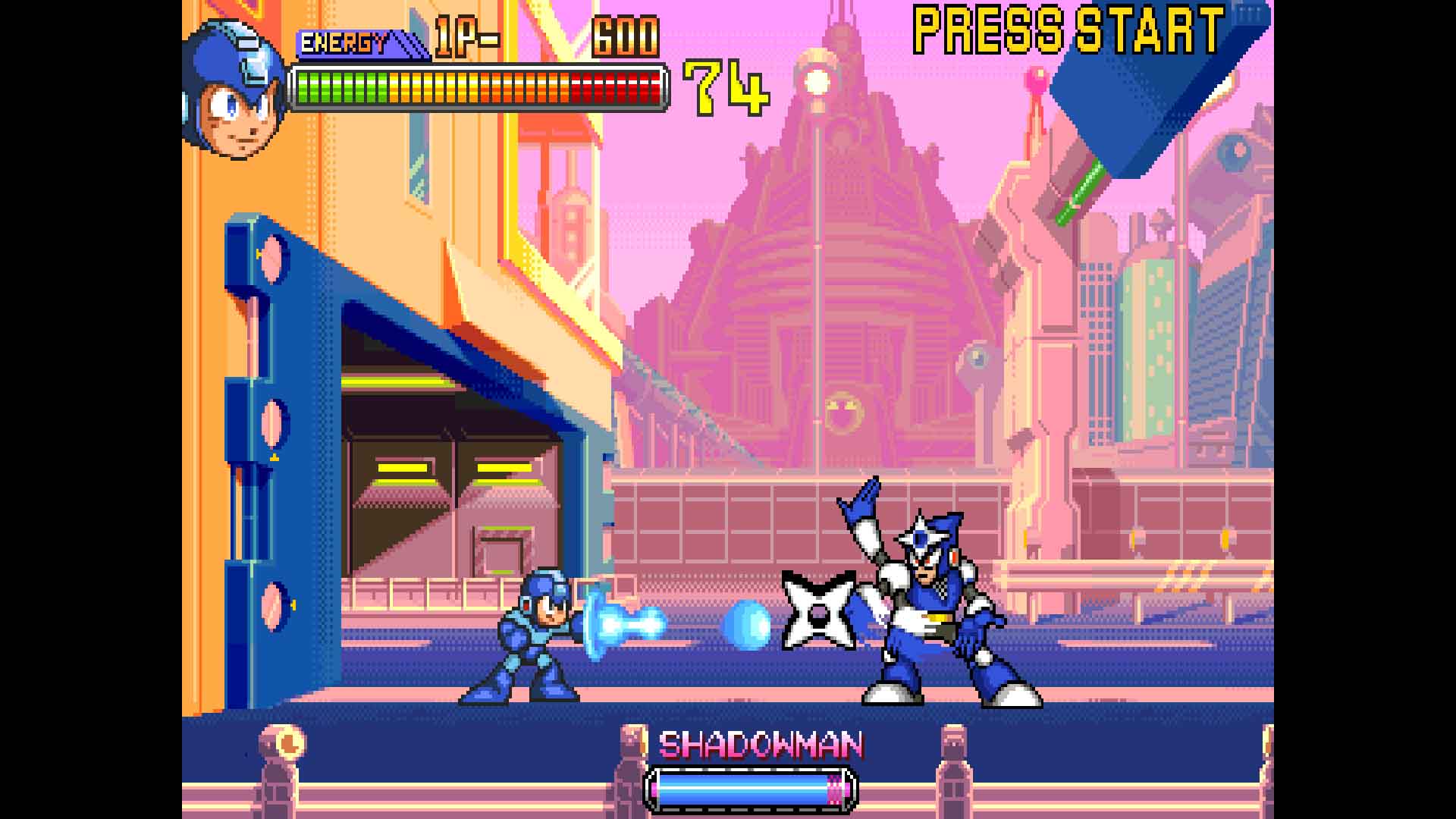 There is in-game currency to earn that unlocks different bezels and other goodies. You have some nice emulation and quality of life shizz like the ability to rewind or alter the speed of the action, or even shift the screen into TATE mode (which is an option more accessible to Switch users than me on a PlayStation). What I will say – and this could be a clincher on whether or not you roll the dice on the whole package – is that there is no online play.

This would certainly affect my willingness to purchase it as a bundle – particularly in the wake of not one but four other individual collections that have been released in the past few years, all with a plethora of online options. With that in mind, I would recommend picking the few genuine classics for individual purchase, and stick to the dedicated fighter/belt scroller packs for a better all-round experience.

Lots of genuine classics
Emulation and options are great

Capcom Arcade 2nd Stadium is a beautifully presented package which includes a decent strike rate of two thirds bangers to a third of borderline unplayable turds.