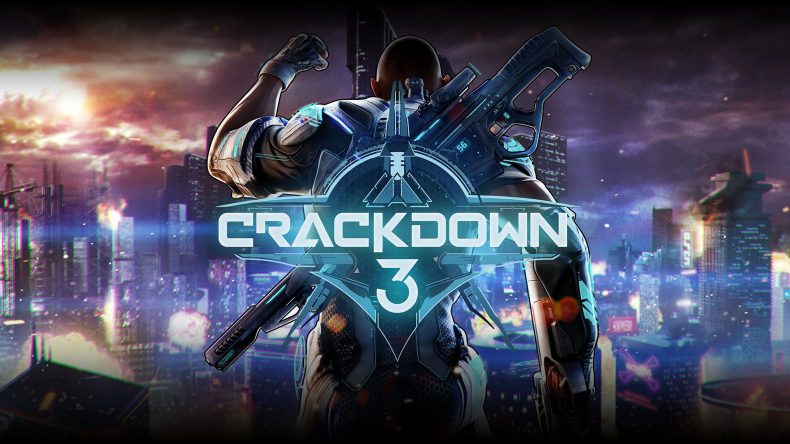 By the time the credits rolled on Crackdown 3’s solo campaign, I’d taken my Agent from slim, jump-suit wearing respawn to tank-throwing, heavily-armoured badass via the colourful and bombastic mediums of controlled mayhem and wanton destruction. I’d switched bodies two-dozen times, collected 400 of the 750 Agility Orbs on offer, and taken down more bosses in mech suits than I care to remember but – and this is crucial – I’d had a ridiculous amount of fun doing it.

Crackdown 3 is, arguably, five years late to its own party, arriving to find that everyone is already leaving, the DJ is bladdered and there’re no sausage rolls left. The weird thing is that it doesn’t seem to care, and is instead stubbornly insistent on making its own fun, cranking the music back up and dancing like there’s no tomorrow.

It all but ignores the misfiring second game, instead presenting what amounts to a straight-up remake of the 2007 original. The Agency’s finest, led by Terry Crews’ enthusiastic and mildly psychotic Commander Jaxon, are attacked in the opening cutscene as a biological weapon detonates over the City, spreading deadly toxins. An organisation called Terra Nova soon steps in to take over, led by CEO Elizabeth Niemand, and immediately imposes martial law. Only Jaxon (or any of the initial 9 agents you choose from) can save the day, by shouting, ground-pounding, and punching cars in half, apparently. There’s no mistake that Terry Crews is the face of Crackdown 3, bringing his trademark musclebound charisma to the role of Jaxon in a story that, to be perfectly fair, struggles to do anything particularly original. Without a doubt, you will have seen everything Crackdown 3 offers elsewhere, but this time it’s cel-shaded and dialled past eleven. As before, you’ll begin fairly underpowered and certainly outgunned, but within a few hours you’ll feel your power begin to grow.

Your Agent has five core skills: Strength, Firearms, Explosives, Agility and Driving. The first 3 are the easiest to improve, as 70% of Crackdown 3 is combat. Agility can only be boosted by finding Agility Orbs stashed in lofty positions around the City, while to improve your Driving skill you’ll need to pull off handbrake turns, nail stunt jumps, and commit vehicular manslaughter at every available opportunity. Everything you do earns orbs, and as you increase the level of each skill you’ll unlock new abilities tied to it. For example, Agility gives you a double (then later a triple) jump, and a rocket booster, while also reducing fall damage and increasing jump height and running speed.

At a certain point (for me when I’d levelled Firearms, Agility and Explosives up to about level 4) you’ll begin to feel overpowered. The game will attempt to throw more mindless enemies at you, and you’ll certainly die now and then only to respawn at the nearest supply point having lost a few Orbs, but you’ll be so busy leaping small buildings, throwing cars at people and generally dispensing weaponised justice that you won’t care. Crackdown 3 is a playground of destruction and it’s hard to worry about anything much when you’re in the zone. Which is a good thing, because despite the map fairly heaving with things to do, there are times when Crackdown 3 begins to eat itself. The missions vary commendably even within their own archetypes, but the manner by which you go from A to B (A being a Stronghold full of bad guys and B being a smoking heap of vehicles and corpses) is largely the same. You just shoot stuff, over and over. There are a few side concerns that require you to do things like climb platforming puzzles called Propaganda Towers, or perform checkpoint races either on foot or in vehicles, but by and large you’re a bullet courier and nothing more.

That said, it’s not a bad thing all the time, since whenever Crackdown 3 tries its hand at something other than destruction there’s a sense that something isn’t quite right. The platforming is just a little off, as you’ll constantly be attempting to find the very thin line between over-jumping and under-jumping, and then land on it. The laws of physics are party poopers in Crackdown 3’s colourful City, and you’ll spend most of your time either at odds with them or ignoring them completely. I had countless moments of genuine rage trying to land on a particular platform only to achieve this, and immediately panic roll off the edge. There are checkpoints at certain stages of the Propaganda Towers and the races are mercifully bite-sized affairs, but neither your vehicles nor your Agents handle all that well in a pinch.

You can switch out your body, vehicle and weapon loadout at a captured supply point, which is also where you go to reduce your Wanted level. The first time you pick up any gun or gadget or jump into a new vehicle you’ll claim it, and it’ll be available for you later. The guns and gadgets are many and varied, and there’ll be a loadout to suit any situation. Some of the guns are pretty cool, too, such as a multi-rocket launcher, a singularity cannon, and a rifle that fires explosive poison rounds. Perhaps the most disappointing element of Crackdown 3 is the top tier of Niemand’s organisation, who form the line-up of bosses. Polishing off objectives dotted around the map will destabilise the pillars of Terra Nova, including Industry, Security and Transport. Once you’ve done enough to disrupt any branch, the Executive Officer thereof will challenge you. Apart from two or three deviations, most of these result in a rocket fight with a human in a mech suit. By the time your Agent is pushing Level 5 in a few skills, these engagements will be tediously simple on the standard difficulty. It’s a shame that its actually more fun blasting and climbing to the fight than engaging in the fight itself.

Points are earned for the inclusion of a coop mode, though some are lost because you can’t matchmake, and instead are forced to invite your friends, which is great as long as your friends are playing. Tearing about the streets with a buddy is great fun, though, throwing each other through vehicle stunt rings and doubling down on the destruction, but it desperately needs a simpler drop-in/drop-out system in place. It all runs super smoothly though, with only the occasional stutter during autosave, and no real technical issues beyond the odd bout of over-excited physics.

Graphically, it’s a pretty game. The environments are rich and colourful, sprinkled with neon and twinkling lights at night, then drenched in bright, deceiving sunshine in the daytime. The 21 Agents are all physically unique (though they only differ under the hood in terms of which Skills they improve fastest) but the enemies are pure cookie cutter cannon fodder. Likewise, the citizenry is so dull and identikit that you won’t care if you accidentally mow down a street full of people. Crackdown 3’s writing suffers the same issues as Volition’s Agents of Mayhem, in that it feels very much like a game out of its time. Putting aside the gleeful joy of blowing stuff up, the humour never truly feels part of the DNA, instead coming across as a little forced and tacked on. The Agency Director (a returning Michael McConnohie) and your handler, Echo, occasionally amuse, but for the most part you’ll miss their quips and one-liners because something is exploding.

There’s no denying that this is a fun game. You’ll spend somewhere in the region of 15 hours in a playthrough, maybe upwards of 20 if you want to fully max out your Agent’s skills and find all the hidden Orbs and Agents, but I never felt bored. I’d seen it all before in one form or another, sure, and I was rarely wowed by anything SUMO Digital offered me, but I was always entertained, always occupied by climbing this tower or trying to clear that Stunt Ring.

With more and more looter shooters or expansive RPGs hitting the shelves, in a world where every FPS will soon have a Battle Royale mode attached, Crackdown 3 almost feels like a breath of fresh gunsmoke. It may at times feel like a magic mirror back to 2007, but its simplistic, unpretentious approach to good old-fashioned mayhem means it’s never less than a blast to play.

Loud, brash and gleefully addictive at times, Crackdown 3 is unashamedly fun, even if it does feel more like a remake than a sequel.

Here’s Where You Can Watch X018 This Weekend