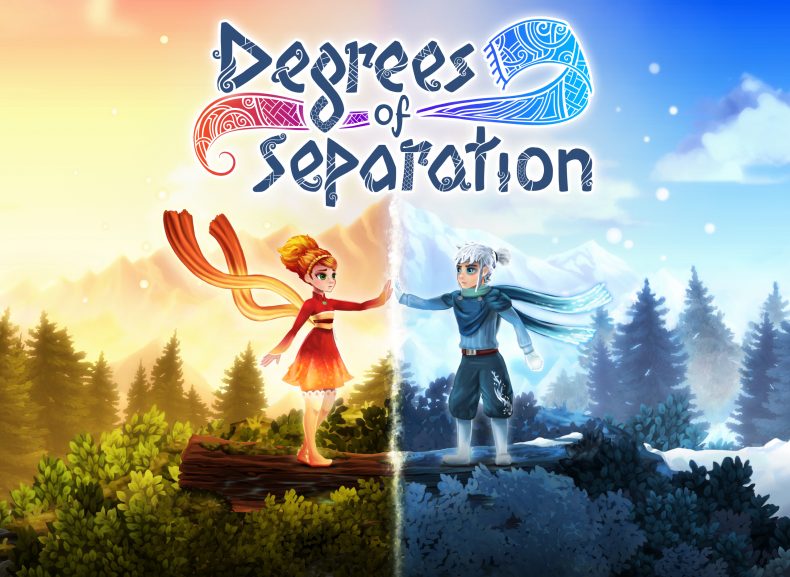 There’s nothing more powerful than love. It transcends and trumps everything. It doesn’t matter your background, ethnicity, sexuality or gender identity. Love conquers all. Not even death can stop true love, all it can do is delay it for a while.

That’s the message that Moondrop is aiming to get across in their latest puzzle platformer, Degrees of Separation, that sees you taking control of Ember and Rime, a couple who have fallen in love yet are being kept apart by a mysterious force meaning they are unable to have any sort of contact. Imagine Romeo and Juliet but replace two warring families with a magical barrier and you get the jist. Your main aim is to go to each section using Ember’s powers of fire or heat along with Rime’s powers of ice or cold to solve various puzzles in an attempt to gather scarves to unlock new sections, discover what is happening to Ember and Rime’s respective worlds and maybe bring down the mysterious barrier that keeps them apart.

Degrees of Separation has a strong storytelling narrative fed to you via a narrator which feels like a fairytale is being read to you as you play. An interesting addition to the narration is that it’ll sometimes hold a clue in how to complete a certain puzzle. For example, on one occasion the narrator stated that Rime helped Ember reach the scarf, I think from a certain platform, meaning that I would need to use Rime and his abilities for the majority of that puzzle with the end result being Ember collecting the scarf..

Alongside the storytelling is a fantastic score playing at various points. There’s a lovely piano piece that plays at the main title screen and when that kicked in I knew the music contained throughout would be a winner, complimenting each section and giving me a nice warm feeling that comes along with a good soundtrack.

Degrees of Separation also has some beautiful artwork. I especially like the way warm colours like your reds, oranges etc are used for Ember and her world, similarly with Rime and the use of cool colours to show off the polarisation of their respective worlds.

The puzzles themselves aren’t overly taxing although, as with most puzzle games, there are a few that can cause you to have a bit of a hair tearing session as the solutions aren’t that obvious. This will either leave you spending more time than is necessary trying to figure out the solution, or telling that particular puzzle to take a long walk off a short pier, and any other colourful words or phrases that happen to spring to mind whilst in the moment. Overall I had a lot of fun with the puzzles and messing about with each section’s new abilities.

Luckily you don’t need to collect every scarf in each area to unlock every section so that it’s potentially only a problem for the completionists and achievement/trophy hunters amongst you. While I really enjoyed my time with the puzzles and the story aspect, Degrees of Separation is unfortunately not without its issues that can’t be ignored.

For me, the AI is so frustratingly unintuitive that on more than one occasion I found myself saying “Oh feck off Rime/Ember”. You can get the AI to follow you at the push of a button and it tends to just mimic your actions as it follows behind. The issues arise when you happen to be on different levels. If I was one level up and wanted the AI to follow me it would more often than not move to be directly below me and not climb a rope up to my level.

This wouldn’t frustrate me if this was all the time, but there would be the odd occasion where it would climb the rope so it was obviously a feature, just not a frequently utilised one.

Another vexation, more than an actual problem, is the amount of scarves to be collected. It feels like a collectible side quest gathering them all and it does get old very quickly. To make matters worse it even references how banal an activity it is in one of the scripted narrator readings. I know that collecting these things can be tedious, but having the game actually point it out to you is a bit low.

There was unfortunately some serious bugs that caused me to have to close down and restart.

The first was the characters falling through the floor. This only happened a couple of times, but the upside down would appear when I happened to jump into a wall too many to times while reaching for a ledge. It was like Rime or Ember thinking enough was enough and they would phase through the wall and I’d be greeted with darkness and nowhere to go other than the console home screen.

This led to a painful trek all the way back to that last puzzle location. Even though Degrees of Separation has an autosave feature when you reach any of the fast travel checkpoint stones, when you go to start again you’ll be back in the main area and need to travel through each of those fast travel checkpoints. By the way, there was no way to jump to the last reached checkpoint; you’d need to fast travel through each individual point to reach where you’d left off. The other bug that caused me to restart as above was Rime’s freeze ability would stop working in certain ways. When you move Rime over a body of water it freezes so he can walk over it, similarly when there’s a platform moved into running water it can be frozen in place letting Rime climb onto it or do whatever needs to be done.

On more than one occasion the ability to freeze things in the water would stop working altogether for puzzles this mechanic was integral to. Annoyingly the water would freeze allowing Rime to walk over it but would flat out refuse to hold anything in place. If there was another way to complete these puzzles without that ability then it’d be fine but there wasn’t.

Degrees of Separation is a lovely game with a beautiful story of a couple trying to overcome a devastating obstacle just so they can be together. In saying that it’s hard to focus on this when you’re faced with the monotony of what feels like a forced collectible mission or come across one of the few bugs or annoyances that I happened to come across.

Degrees of Separation is a beautiful puzzle game with a lovely story of a couple with conflicting backgrounds just trying to be together but is let down by a large amount of monotonous scarf collecting and various bugs.