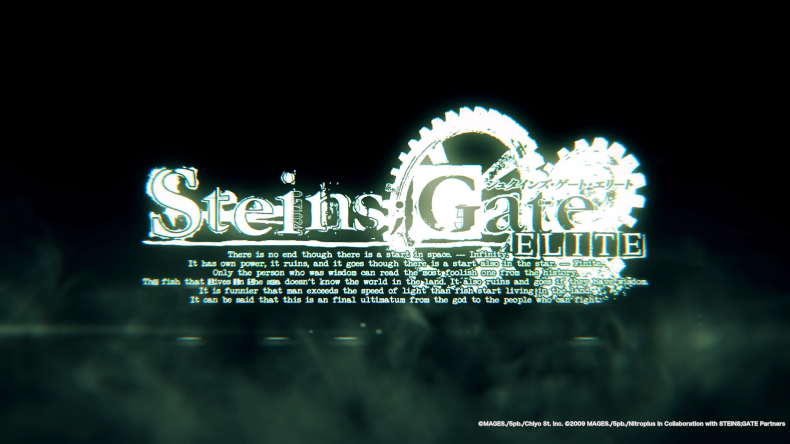 This generation is no stranger to ports, re-releases, remasters, and remakes. We’ve had so many games from the PS3/Xbox 360 era made available on current generation systems in some form or the other, and while some of them have been cash grabs, we’ve also had some great remakes like Shadow of the Colossus. I never thought I’d be reviewing a remake of a visual novel but here we are. Steins;Gate has been released on multiple platforms ranging from iPad to PS Vita and even PC in English. Steins;Gate is basically a must play in general for anyone interested in fantastic stories, and I was quite skeptical of Steins;Gate Elite when it was first announced.

There are very few cases where an anime lives up to a visual novel when it comes to storytelling and art. There are situations where an anime can do a story justice, but it is almost always better to just experience a visual novel for the whole experience since an anime is usually an abridged version or only covers a few of the endings, if not just a single one. Steins;Gate Elite aims to bridge the gap between a visual novel and an anime by offering animated scenes from the anime to replace the static art the visual novel had. Instead of playing like an interactive book, Elite plays like an interactive anime show and this is one of the reasons a home console version works so well. While visual novels play best on portables since they are like reading books, anime is always best on the big screen and Steins;Gate Elite is a joy to experience on a big screen TV. If you’ve never played Steins;Gate, you can absolutely start with this. If you’ve never played a visual novel before, this is even better as a starting point. Steins; Gate is a story about time travel and has characters you will grow to love over the dozens of hours you will likely spend here. As with the original, there are multiple endings here and your decisions may affect which ending you get. I’d recommend playing it without any guide for your first playthrough and then looking at a guide for wrapping up all the endings and seeing everything Elite has to offer. Even though I’ve played this on PS Vita and iPad (having watched the anime before both playthroughs), I ended up loving Elite. It feels like the best way to revisit both aspects of a story I love so much.

My biggest concern was with how the anime itself isn’t as good as the superb art the visual novel had and how this would affect the overall feel. Thankfully, the developers did a great job with adapting the anime and overlaying text boxes and even the other segments of the story. On the PS4, things looks crisp (outside of the zoomed in moments) and the cutscenes are nice on the big screen. I think this is the only visual novel ever that I’d recommend for non portable play. You know how much I dislike playing visual novels on PS4 or PC when a portable option exists, but Elite is definitely a great experience on TV. One aspect that deserves a special mention is the slick new interface for anything involving decisions. Everything is animated superbly and is a huge step up the original interface that suffered from text wrap issues. Elite’s opening song is excellent and there isn’t anything really wrong with the audio and voice acting itself but the one annoyance is in the implementation. There are some moments without any sound that could’ve used some atmospheric sounds or loops for the music that played before. I’m glad to report that the audio sounded great right from the opening tune (which is superb) right to the ending.

The problem with using the anime cutscenes to replace the consistently gorgeous static art the visual novel had is that certain scenes that see zoomed in moments look bad because it literally is like zooming into a scene from an anime. Expect a few blurry visuals when this happens. Thankfully, the actual scenes look great on the big screen. While this didn’t affect my enjoyment since I watched Steins;Gate with Japanese VA, I feel like not including an English track is a missed opportunity. This would no doubt balloon the localisation cost to get anything extra recorded, but the fans who watched the Steins;Gate anime dubbed would’ve appreciated having a familiar voice track included. Overall, I’m glad I was wrong about Elite. I expected it to be another cash grab, but this ended up being a great way for me to experience both the game and the anime at the same time. Not only is this a great way to get people who aren’t into visual novels or Steins;Gate into the genre, but it’s also well worth it for old time fans who enjoyed the anime. It is pretty great that all PS4 (and PC) purchases of Steins;Gate include a huge bonus visual novel that wasn’t localised until this release in the form of Linear Bounded Phenogram. With that considered, this is a great package.

Steins;Gate Elite takes the best of the anime and visual novel source material to create a superb visual novel adventure experience that is a must play for newcomers to the genre and fans of the original visual novel.