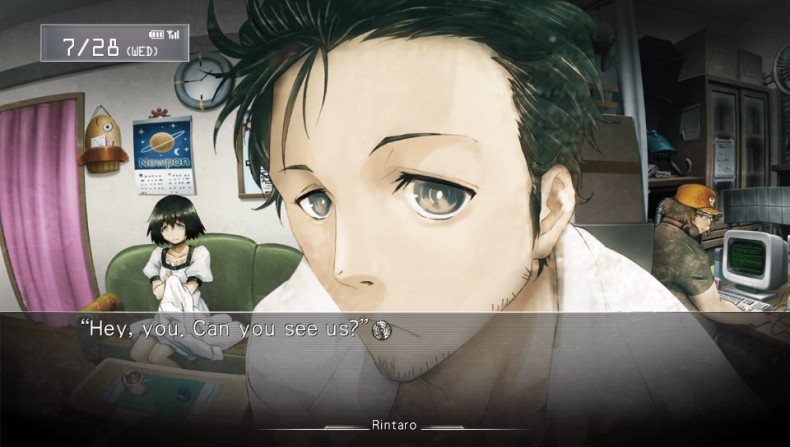 Ever since I started reviewing games, I’ve been thankful for getting the opportunity to review new games in franchises I love and discovering some amazing gems. Some games stick with you for a very long time. Persona 4 Golden changed my life for the better and showed me what games were capable of, I can still remember the day I finished it and picture the credits rolling. Steins;Gate is the first game since then to have had such an impact on me.

The pure visual novel genre has only recently started seeing a steady flow of releases thanks to the likes of Sekai Project on Steam, and if you’ve ever looked for a list of visual novels to play Steins;Gate and Clannad are usually at the top of the lists. Steins;Gate is a near perfect experience that you owe to yourself to experience.

Rintarou Okabe, a college student and self proclaimed mad scientist, whose life you experience, accidentally invents a time machine. This isn’t one that can send you to the past but one that lets you send emails to your past self thereby altering the future in some form. He is the first member of Future Gadget Laboratory which is a small two room flat in a rickety old building. You get to vicariously experience his life through friendship, emotion, mental trauma and other things. Steins;Gate is a story about time travel on the surface but it is actually about the ill effects of it; the butterfly effect. As the story progresses, you, along with your partner in crime Itaru Hashida and “hostage” of a childhood friend, Mayuri, will befriend and come into contact with a variety of somewhat stereotypical characters.

There are a lot of scientific terms used during the course of the story and references are made to pop culture phenomena both in the West and in Japan. Luckily the game goes out of its way to highlight these key or new terms, with the in game information section giving you more detail. It’s funny seeing brands everyone is familiar with like Dr Pepper or Starbucks and organisations like CERN purposely misspelled as Dr P or Starbecks. You’ll need to be ready to set aside a good 40 to 50 hours if you want to experience everything Steins;Gate has to offer though. When the story finally goes into overdrive, it stops feeling like a game or visual novel and you start to feel Okabe’s pain.

Every small thing done in the past effects the present, and the decisions you face in later chapters are super hard emotionally. I played through the full story and got all the endings over a week and I was mentally exhausted when I was done. This real life mental exhaustion, coupled with the mental exhaustion you feel as Okabe, will take its toll on you and makes for a really meta experience. There’s a fair amount of humour in the plot however, thanks to characters like Hashida as well some double entendres and general Japanese culture stereotypes, which really helps the story.

Whenever people talk about Ace Attorney games or even Zero Escape games, the visual novel genre is mentioned. While those do have visual novel elements, they still have a fair amount of gameplay in the form of puzzles, exploration or trials. Steins;Gate is a visual novel in the most pure sense. There is almost no real gameplay and you have to read through tons of text: you can see why it took so long for JAST USA to localise this for PC last year in the first place. Decisions are made based on the in game phone emails and calls. These either set off the correct or wrong flags for respective endings so you need to save often and keep multiple save files if you want to see them all; There are nearly 50 save slots available to you and I’d used up 40 of them by the time I had the true ending.

Speaking of save files, if you’ve played visual novels or role playing games with multiple endings, you know what it is like, reloading a previous save to make other decisions or just playing through something again for another ending. When you do that here it is another meta experience that Steins;Gate offers. You reload a save from a previous day or a few hours ago and it feels like just Okabe sending an email to the past to alter the future’s events, something that never occurred to me when I blasted through multiple endings of Virtue’s Last Reward. If you’re lucky, you will get the true ending in a single play-through. Try to avoid using a guide until you’re done with the game once though, because even spoiler free guides kind of ruin the experience. The true ending takes some care and effort but it is totally worth it.

Musically Steins;Gate seems pretty generic, save for a quite memorable opening song. As you go deeper and deeper into the game though, these seemingly innocent tunes start making a difference. I started to associate people with the music that played in the background when I spoke to them and the atmosphere in the music chosen for every location or person is a perfect fit. I’m a big fan of the Japanese voice acting in Steins;Gate but keep in mind that there is no English voice acting in the visual novel. Visually Steins;Gate has some of the best art you will see in a visual novel. Character portraits look great with Huke’s unique style and I really like how the portraits change depending on the emotion in the dialogue. It feels way better than having a plain face with lips moving like in the Persona 4 Arena games. You also unlock CG with the decisions you make and there’s a gallery to view all the things you have unlocked including videos and music after you complete any one of the endings.

In game that involves reading so much text, having text alignment issues is incredibly frustrating though. I’ve often seen dialogue where words get truncated; in the case of “isn’t” there are a number of occasions where “isn’” is on one line and the next line starts with “t” for example. This is more annoying when you read through emails on the in game phone, where in most cases words are cut off and not hyphenated. This is a big problem and I hope PQube fixes it.

It’s a little slow to get going as well. Many story driven games start off slow and then throw you into the action. Steins;Gate spends a considerable amount of time initially with story and character building. The pace goes multitudes faster when you near the halfway point until the end of the game. Not having English voice acting may be a deterrent to you as well, at least if you aren’t a fan or used to reading a lot of text while listening to dialogue in another language. Even though I don’t speak Japanese however, the emotion conveyed by the Japanese voice actors did the job perfectly.

Have you ever fallen in love with an album or a book so much that you wish you could go back in time or erase your memories and experience it blind? That’s how I feel whenever I think about Steins;Gate. I’d even go so far as to say it is the best story I’ve experienced of any medium in over a decade. Having watched the anime years ago, I am blown away by how much more I enjoyed the visual novel. If you’re even remotely interested in time travel or are a fan of the Back to the Future movies, experience Steins;Gate as soon as you can.

Text wrapping issues in dialogue and on the phone are annoying.
The supremely slow pace of the initial sections.

Steins;Gate is the crowning point of the visual novel genre with its phenomenal story, characters, and voice acting.

Spike Chunsoft announces a limited edition for Steins;Gate Elite in North America for PS4 and Nintendo Switch with a hardcover artbook and cloth poster

Steins;Gate Elite is getting localized for PlayStation 4 and Switch (maybe more platforms) thanks to Spike Chunsoft