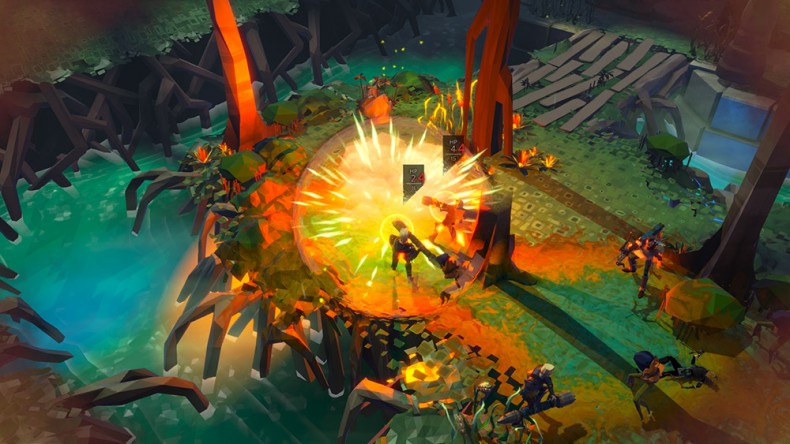 If nothing else, death is a massive, massive inconvenience. It scuppers plans, ruins birthdays, keeps Sean Bean confined to the first third of pretty much anything he stars in, and is generally agreed by all to be a bit of a pain. Well, wait until you play Massive Chalice. If you’re not a fan of the Reaper now, you’ll be even less enamoured by the time you’ve spent a few hours in DoubleFine’s Game of Thrones-flavoured XCOM homage.

I say “homage” because I like DoubleFine, but in truth Massive Chalice is simply very, very similar to Firaxis’ top-down tactical UFO-blaster. In fact, it’s so similar when on the field of battle that veterans of Enemy Unknown will be immediately at home. You move characters around a grid-based environment, attempting to take out the enemy as quickly and efficiently as possible while saving as many of your squad as you can. There are several classes to field, each with unique abilities, strengths and weaknesses, and between combat you’ll retire to a base of operations where you can research upgrades, items, tactics and buildings. The biggest difference is that Massive Chalice takes a leaf out of Game of Thrones’ book where your Heroes’ well-being is concerned. Valar Morghulis, baby. Valar Morghulis.

The action takes place in a kingdom beset by an encroaching corruption called the “Cadence”, which devours the land and births mutated monsters who terrorise the countryside and generally murder, maim and manhandle the common folk. You are the ruler of the kingdom, and you just so happen to be handily immortal, the magic of the titular Massive Chalice sustaining you for centuries as you fight to defeat the Cadence. The Chalice itself acts as your guide and mentor, its dual-gender split-personality providing advice and witticisms in equal measure. You’ll first be asked to select five ruling Houses from a huge list of community-made options. Each house has a crest, a patriarch and matriarch, and a motto. So far, so Westerosi. You’ll then be launched straight into a battle against a few low-level enemies called “Seeds”, which are fairly harmless plant-like mutants. They’re led by a “Lapse”, a floating blue spectre with a ranged attack and a nasty habit of exploding when it dies and stunning anyone nearby for a full turn. While cover plays a lesser role than in XCOM, positioning is still important, as some enemies can use Area of Effect (AoE) attacks or shoot through several Heroes in one hit. There are also exploding plants to watch out for, and later on you’ll meet enemies called “Twitchers” that will trade places with one of your characters in the blink of an eye, potentially dropping in within attacking distance of your other Heroes.

However you win the battle, you’ll then find yourself faced with governing a kingdom under constant threat of attack. It’s divided into several regions, and when an attack comes you’ll have to decide which of two regions you want to defend. Sometimes it’s down to the reward, as some areas offer bonus experience or reduced research time, but often it’s down to which is most critical. If you fail to defend a region three times, you will lose it to the Cadence. As a result, outlying regions are harder to defend but offer greater perks if you build on them.

The most important job right away is to build a Keep. Once erected (initially taking about 8 years but increasing each time), you can install a regent from among your Heroes. If you then marry the regent to another lord or lady of the opposite sex, they may have children who, after 15 years, will join your army as Heroes. Installing a Sagewright’s Guild will allow you to research improved armour, weapons and items, while a Crucible will increase the base level of your new recruits. You must assign Sagewrights from your roster, as well as a Crucible trainer, and this is where Massive Chalice gets complicated and a wee bit brilliant. Each Hero has a unique personality made up of dozens of positive and negative traits. For instance, an “optimistic” Hero will actually have a lower critical hit chance than his or her stats suggest, while someone hawk-eyed has a greater range. You have sickly Heroes, Heroes who are “young at heart” and less affected by their age; some characters are natural rebels and will develop traits opposite to their parents, whose personalities have a major bearing on their children. There are drunks, who will navigate the battlefield in odd ways and can’t be relied upon to hit anything, cowards who forget their training when they’re damaged and bold warriors who do greater damage after losing a teammate to the enemy. To create the strongest Heroes you need to find good matches when installing regents and their partners. It’s also worth noting that you can install same-sex partnerships, who will adopt children instead of conceiving them. Babies found orphaned (as rewards for certain battles) can be fostered with any regents you choose.

Four classes make up your army: Hunters, who wield shoulder-mounted heavy crossbows, Alchemists and Boomstrikers who throw incendiary flasks, and Caberjacks, who batter enemies with massive iron cabers. You level up based on experience gained, which unlocks new skills along two divergent paths, and any character who goes beyond level 6 becomes a Legend, and can pass a relic down to their descendants when they die. Oh, and they will die. There is no question of that. Anyone in your kingdom can die at any time, either in battle, of old age, disease or random disaster. The Cadence tend to attack every 10 – 12 years, and the time within is spent researching ways to kill them and breeding more soldiers. You’ll regularly take a character from newborn baby to high-level veteran, and then have to bid them goodbye when they kick the bucket at the ripe old age of 82. It would be even more affecting were you able to name them and create the Houses yourself, but it’s still gutting when one of your best has to shuffle off their mortal coil.

Likewise, the Sagewrights can pass on quite out of the blue, and random events can occur such as a rare disease in the nation that claims a Hero. I had one of my best leave me because she fell in love while on a mission I sent her to complete. It’s out of your control, which makes it both incredibly frustrating and, well, kind of realistic in a way. Your best bet is to marry your Heroes well, raise strong children and do the best you can with them in the five or six battles you’ll take them into before they’re pushing up the daisies. The better gear you research, the better chance they’ll have of killing and winning and levelling up quickly. It’s a unique, oddly exhilarating system that keeps you on your toes all the time.

The humorous script has DoubleFine written all over it, littered with subtle comedy and occasionally sinister undertones as the Chalice narrates each battle and reports on events from the timelines during the build phase. Graphically it’s not amazing, but the angular, cartoonish art style fits perfectly with the atmosphere. It’s almost as if the action is taking place in the map seen during Game of Thrones’ title sequence.

So, equal parts unique experience and familiar homage, Massive Chalice provides humour, challenging strategy and a genuinely interesting base management system, and handles all of its various elements with confidence and aplomb. More classes would have been welcome, and certainly more control over the ruling houses who govern your kingdom wouldn’t have gone amiss, but this is still a very competent and compelling experience. There are times when it can feel unfair, both off the battlefield (when a character unexpectedly leaves to join the Choir Invisible) and on it (when your hunter suddenly couldn’t hit a barn wall from the inside), but ultimately there are hours of fun to be had building your own version of Westeros and trying to defend it from complete annihilation. It’s not for everyone, but if you’ve an interest in XCOM and feudal fantasy, Massive Chalice is well worthy of your time.

Needs more classes.
Build phase could do with more variety.
Can feel maddeningly unfair at times.