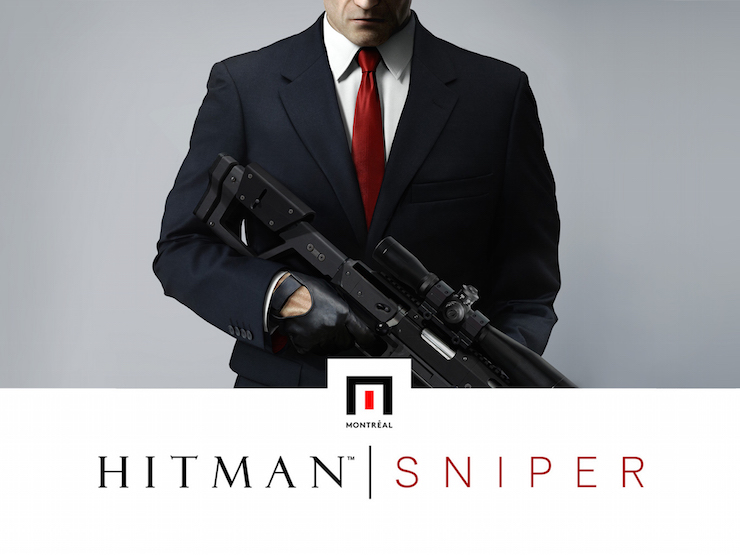 It’s cold and lonely on this outcrop in Montenegro. There’s a light dusting of snow around, and yet here I am, while the cream of the world’s criminal elite are hob-nobbing in a house opposite my location. What I wouldn’t give to be inside one of those warm rooms, or having a dip in one of those heated pools. But no, I’m here to take these guys out, and no, I don’t mean for dinner.

Hitman: Sniper is a shooting gallery, tasking you with taking out targets that have handily congregated in one place and are wandering around, just waiting for you to put a bullet through their vital organs. You move the aiming reticule around the area, pinching to zoom in and out and tapping the screen to fire. It works well enough, but as with most touchpad games you’ll find some of your gestures are mistaken for others, finding yourself firing when all you were trying to do was adjust your aim.

It’s a score attack too, each kill granting points, while mixing up your techniques grants bonuses to the numbers that you are given. Headshot, minimum zoom, moving target, environmental kills, body disposal, there’s a plethora of methods by which to get your points tallies up, and watching carefully as the people mill about is key so you can spot when the best opportunity to take them out is.

Each ‘contract’ you undertake requires you to kill a different target, along with other several objectives to complete. Get a score of X, hit a moving target, get a multiplier of Y; these are thrown at you regularly in an effort to get you to switch things up instead of just attempting to do them the same way every time, and each contract/scenario charges you to finish within ten minutes. The key is to take care of the smaller ones first and then take out the primary target, after which you are extracted from the scene. Fail to achieve all the goals and you will need to try again. You’ll need to be canny about how you go about this – if you start dropping bodies all over the place without a thought for if they’re found then the alarm will be raised and the primary target will get away, resulting in failure. When the alarm is being raised there is a window of opportunity to take out the guard ringing the threat through, but you’ll need to be quick. Anyway, once you’re done you go back to the mission summary which then gives you your reward and also spins a roulette wheel which can grant extra cash or gun parts. Collecting gun parts allows you to build better rifles that have different abilities, making different types of kill possible. Don’t go thinking that all of this is for free though, some guns are hidden behind microtransactions, which range from 79p to an eyebrow raising £7.99. Not required by any means, but it leaves a sour taste in the mouth seeing as you’ve already spent £3.99 on the game.

Over and over again you’re dumped back to the same location, watching the same people walk around doing the same things, this obviously plays into the high score mechanic, encouraging you to remember what each person does so you can take more people out and as a result get more points and climb the leaderboards. Unfortunately the samey nature of the contracts grows dull after a while.

The AI is especially laughable, I’ve seen guards shrug their shoulders at glass panels that have shattered for no good reason, be blind to a person dying in their field of view because the body fell into a swimming pool, ignore laptops that spontaneously combust in front of them and also completely ignore an explosion from a fire lamp. Come on, who ignores an explosion?

The game encourages you to wear headphones for the best experience, and to a point this is true. The music is nice and moody, the sound effects – like the softly blowing wind and Agent 47 holding his breath – are quite nice when they come up. But it’s annoying when you fire the very first shot, at someone out of sight of everyone, in a way where the body is disposed of, and then for the rest of the time you can hear voices shouting ‘Someone’s shooting at us!’, ‘He’s been shot!’ and ‘Get a doctor!’ while no one is running around or panicking. It’s a really weird disconnect between what you’re seeing and hearing, plus, it’s really distracting.

Hitman Sniper is a nice enough shooting gallery and while it’ll keep you entertained for a while with the extra challenges it poses, it’s really not enough to sustain it.

Runs out of ideas too quickly.
Hilariously bad AI.