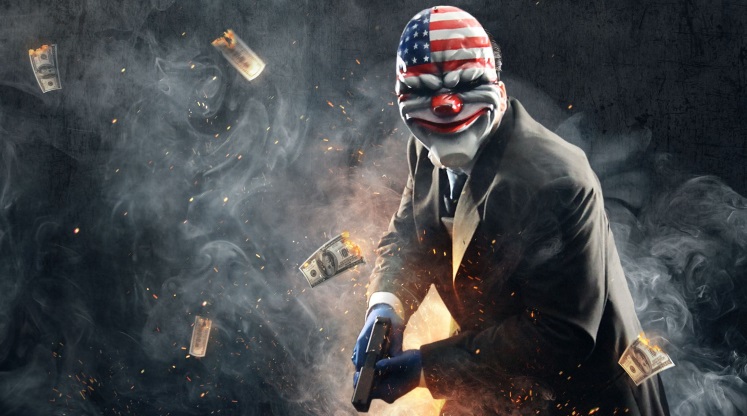 Payday 2 has developed a strong cult following on PC. In fact, only Dota 2 has more users on Steam, and the title has also sold over nine million copies. One of the key reasons why Payday 2 fans are so loyal, and keep coming back for more, is that it receives DLC (paid, as well as over fifty free DLC packs) on a very regular basis. Not many first-person shooters are supported so heavily – especially not two years after launch. So that makes it doubly sad that the PlayStation 3 and Xbox 360 releases are both oft-overlooked, and don’t see the same level of developer support.

Overkill Software have decided to correct that issue, and Crimewave Edition is an up-rezzed version for the new consoles that not only includes every single item and add-on ever built for the PC version, but also promises to match its future support. This has been made possible by the more relaxed online infrastructure on current consoles, and whilst it does mark the death-knell for all previous console versions of Payday 2, the studio promise even better things to come with further support for another two years. The core, of course, remains the same: a four-player co-operative heist game, where teams of criminals have to work together in order to complete a varied selection of bank robberies, drug deals and jewel heists. Each stage is procedurally generated, meaning that difficulty can be ramped up and down with ease, and missions are never identical. Security camera locations change, objectives are found in different rooms, and security guards patrol new areas. Variety is the order of the day, as players can also choose to tackle each assignment however they wish. This makes it unlike many other shooters and means that there is almost an unlimited number of times you can play maps.

Each level really demands communication and teamwork in order to pull off the heists successfully. Whilst there are AI bots provided for single-player gaming, this isn’t really what the game is all about. The AI are really little more than just human shields and decoys, and without a campaign mode, you certainly won’t be experiencing the full package by playing solo. No, Payday 2 is built from the ground up as a teamwork exercise. For instance, on a bank job one team member will be drilling the vault and making sure the drill doesn’t overheat or break down, another may be corralling hostages, and two more are keeping the Police under control. It is the way that your team plan your assault that is all-important: choosing to disable alarms and get in and out silently, or just blasting your way in. You are provided with a selection of tools and gadgets, with endless customisation options and upgrades at your disposal, but it never does a good enough job of explaining how to use any of these items, or how one would choose to run a stealthy heist as opposed to a blood-soaked one. The pre-mission scoping mode allows you to walk around the stage, but all actions (including climbing, ducking or lock-picking) are disabled until you don your mask and become instantly suspicious. There is no option to try and carry out a secretive break-in without drawing your gun and entering “shooter” mode. Knowing where and how to use your different talents would be valuable pieces of information, so it feels something of a missed opportunity that there isn’t a more thorough tutorial.

Stealth is actually very difficult to pull off, and I’d almost say it was a completely unattractive option, were it not for the implementation of the new preplanning mode, that has been available on PC for some time, but previously remained absent from console versions. This lets you and your team look over blueprints for a heist, taking votes on what extra intel you buy to make the job easier, and being able to plan which skills and items of equipment will be most useful to take with you. This does make Payday feel much more like a heist simulator, and really improves the overall atmosphere. Still, as much as you plan and try to be careful, it still always feels like a shooting game first and foremost, and the unclear control system just doesn’t lend itself to the sneaky approach. Even worse, you actually more often earn less money and XP by going through a stage undetected. It is also sad to see that in terms of being a high-definition re-release of sorts, there is very little in the way of performance to differentiate the Crimewave Edition from the previous console release. You will be able to notice the slight upgrade if you are coming from the last-gen iteration (it’s 1080p/30fps), but there isn’t anything too special to speak of, instead it matches the current PC experience (minus the frame-rate). Nothing else in the presentation has been obviously altered, and annoyingly for those who do want to step up from the last console generation, there’s no option of transferring character files or progress across at all: you will have to start again at square one, grinding out as much cash and XP as you can to level up on the new and improved progression trees.

The sheer enthusiasm of the developers comes through strongly, though, in their continued support for their franchise – happily adding a cross-media tie-in with the John Wick movie, or other games such as Hotline Miami. Hundreds of new missions, weapons, masks, and character classes have been added throughout its lifespan too, greatly adding to the longevity of the title. It remains a fully multiplayer experience (a story mode would genuinely be interesting), but there does remain a wealth of content to play through. There is finally some parity with the PC build, but ultimately, how much fun you take from Payday 2 depends on having a good team of friends who can make or break the fun.

A wealth of content to keep you busy, but you need a good group of like-minded, hardened criminals in order to make the most of it.