Game of Thrones: Episode Five – A Nest of Vipers Review 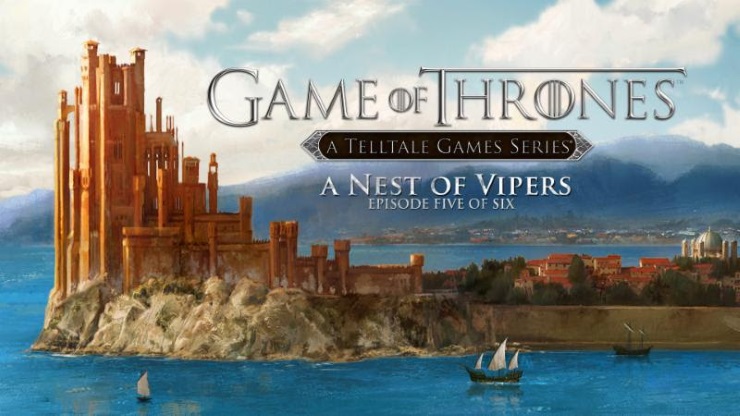 As is always the case, Telltale’s games are heavily focussed on story. As such, this review assumes you’ve played the previous episodes, but won’t spoil from this new one.

After a, frankly, meandering episode, Telltale’s take on Game of Thrones has gotten right back on track. This is an episode full of on-screen action, blood and guts. Although actual movement of the characters is at an all-time low, there’s plenty of mashing the “Q” key, and a few of their trademark quick-time events, but they’re all fairly exciting ones which serve to progress the story at a fair pace.

Importantly, the weaker of the Forrester clan (Mira) is kept to a minimum, and there’s a heavier focus on the larger story. What this means is that more time is spent playing as Rodrik and Asher. Speaking of whom, Asher’s character has gone from the least interesting to one of the more vital people in recent episodes. It’s clear halfway through episode four that his return home is going to be vital to the final episode, and, presumably, House Forrester’s fate. His scenes are the most action-led, and one of the scenes is actually pretty exciting. He’s the star of A Nest of Vipers, that’s for sure. Mira does feature, however, and her parts are propped up by celebrity cameos. Lena Headey’s Cersei is yet again the pick of the bunch, as her on-screen persona not only looks the part, but sounds it, too. Daeneyrs also features in Asher’s sections, but she’s as lackluster as in episode four. Rodrik’s story is the main one, though, that much is clear. While Gared’s tale features one of the most exciting parts, it’s tricky to see how his role will be fulfilled in the remaining episode, as there’s an enormous amount to do, and while there are developments, they are very small ones.

Telltale definitely understands Game of Thrones. The threat of death hangs over every character, and it remains faithful to the TV show, especially when it comes to Ramsey Bolton. The contempt you feel every time you see him is palpable, and just as you wish harm upon him when you see him in the HBO series, he comes across as psychotic and detestable here. His brutality knows no bounds, and episode five opens right where four finishes, so there’s that constant worry relating to his instability. Ultimately, this is a vast improvement and gets the series back to where it should be. That said, as is expected with Thrones, there’s plenty of story left to tell, and it’s quite hard to see how it’ll all be wrapped up satisfactorily by the time the next (and final) episode’s credits roll. Most of all, though, A Nest of Vipers brings back the more emotional moments that Thrones should have mixed among the violence.

After the penultimate section, there was a feeling that it had outstayed its welcome, but the last part is a real heart-wrenching one. When Telltale get player choice right, it really is magnificent, and the closing moments are such that you’ll truly feel control. In a genre that has become slightly stagnant due to the choices feeling less important by the time it’s all over, A Nest of Vipers is a welcome change, if only for those closing moments.

There’s plenty of story left to tell, here, and it can’t quite approach the brilliance of Tales from the Borderlands, but Game of Thrones is back on track, and is hitting more highs than lows again. Let’s hope that finale puts the cherry on top.

A vast improvement on episode four, and gets the series back to where it should be, containing emotional moments and lots of action.