previous
The Order: 1886 Review
random
next
The Sims 4 Review
2 likes 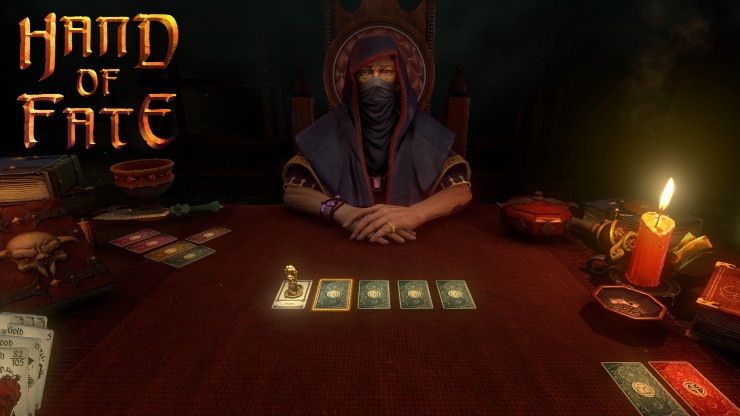 Rarely does a game you’ve never heard of rock up days before release and absolutely blow you away, but that’s exactly what Hand of Fate has done. Coming from a Kickstarted background, Hand of Fate is a collectable card game with heavy roguelike elements, third person combat and more than a hint of Dungeons and Dragons. It sounds crazy, but it works unbelievably well.

With so many different elements it’s not easy to describe Hand of Fate in a succinct way. You have two decks of cards, one made up of weapons and armor that you draw during each dungeon run, and another made up of encounters, that are placed on the table for you to explore. As you progress, you unlock more cards to add to your decks. Early on, your deck composition is fairly unimportant, but later on tailoring your equipment deck to the encounters you will face makes things a lot easier.

Each turn you can move to one card across from you; undiscovered cards will be face down and revealed when you move onto them. The encounter cards can range from a simple shop to a combat encounter, or just a chance meeting with a goblin who gives you a free piece of equipment. The location and layout of each card is randomized so no two runs will ever be the same. Getting a good run of encounter cards can be the key to success in later stages and in the incredibly addictive Endless Mode, but more often than not a string of unavoidable combat encounters can leave you in a very sticky situation. It’s the roguelike elements that really keep you coming back for more. Quite a few times I wanted to rage quit after I made a stupid mistake, but the thought that maybe I was in line for a good run made me jump straight back in again. Getting your strongest weapon in the first few turns and picking out a few of the huge success cards in Hand of Fate’s equivalent to dice rolls (which see you select one of four cards that can either be a success or failure or a variant of both) results in a great feeling, not too dissimilar to rolling a perfect 20 in D&D to take out that seemingly unbeatable foe.

With multiple paths through many dungeons, it would make sense to seek out the exit or final boss as quickly as possible, but the addition of tokens that grant extra cards offers the perfect incentive for exploring. Tokens are earned from certain encounters if you complete them in a certain way, and will grant cards to permanently add to your deck. The more tokens you have, the better chance of getting strong equipment, which is another small hook that keeps you coming back.

Interestingly, whenever you begin a combat encounter you enter a 3rd person arena with melee combat that is very similar to that of the Arkham games, albeit a bit less smooth. The combat is serviceable at best and the AI enemies you fight are never up to much on their own. Multiple enemies can become a problem, though, especially if you are underequipped, but the only real challenges for the most part are the boss fights at the end of each story dungeon. You are also strangely dumped into the 3rd person engine when you go to a shop (which feels slightly unnecessary) and when you enter a trap event. Trap events see your character enter an area filled with traps such as moving spikes or wall-mounted flamethrowers to avoid. Here, the camera can be as much of an adversary as the traps themselves, and the occasional frame rate drop across all third person sections make them not quite unwelcome, but certainly in need of improvement.

Framerate and load time issues aren’t the only bugs present (and it’s worth noting these issues are incredibly minimal on the PC version, which we also tested), and I experienced the worst kind of error where my save, and thus all campaign progress and unlocked cards, was wiped. The bug occurred after I completed a campaign dungeon and was returning to the menu screen. The game froze, and upon restarting, loaded the tutorial mission with all my progress gone.

Aside that one major problem (which may have been totally isolated), the little gripes are easy to look past as Hand of Fate presents almost an entirely new genre to explore. It really is like nothing I have played before and it’s exhilarating to discover what lies next in your adventure. Unexpected encounters, brilliantly written situations and the ability to use your imagination to see the situations that are explained on screen makes Hand of Fate so enjoyable to play, and not just for those with an interest in CCG’s or D&D.

Unlike anything else.
Keeps you coming back for more.
Roguelike elements.

Combat isn’t great.
Technical issues can be a pain.

Hand of Fate is unique, offering an addictive and incredibly entertaining experience that anyone can enjoy.

Hand of Fate: Ordeals now has a release date and a Kickstarter