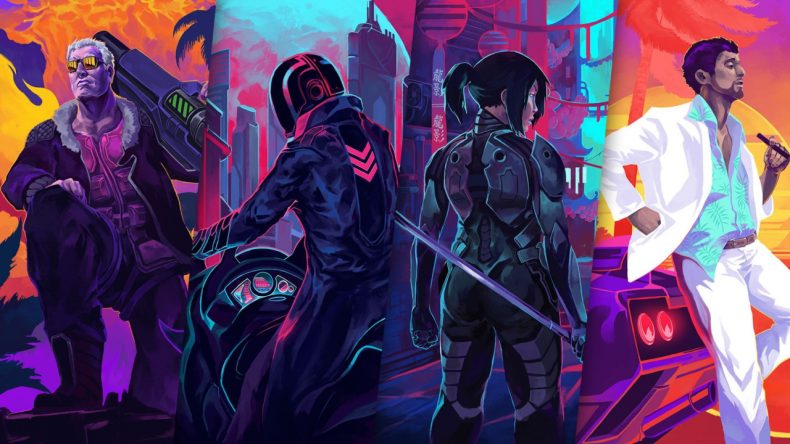 Hyper Jam is what happens when someone has a really cool idea but doesn’t quite have the resources to follow it through. There’s no story or context to explain why four clichéd, retro-futuristic warriors are fighting one another in a neon-drenched arena, you just kind of have to accept they are and run with it.

Now this wouldn’t usually be an issue for me. I’ve played enough games to know that a lot of the time we don’t even need context if the violence is good. Did I say violence? I meant gameplay. If the gameplay is good. And to be fair, the problem with Hyper Jam isn’t the quality, it’s the quantity.

It’s an arena brawler that sees you select one of four characters, Vance, Max, Ghost or Yuki, and then face off against up to a quartet of other players or bots. You can attack, block, or evade, and periodically random weapons will drop into the arena. A katana, a hammer, a rocket launcher and grenade launcher, and a bow are all on offer for whoever is quickest, and each weapon has a standard attack and a charge attack. Under normal conditions it only takes a few hits to kill, so battles are fast paced, and when you’re out you can still control an orbital laser to deal damage to whoever is in the lead. This is because each fight is a points race, with more points awarded for wins and kills. Once a player reaches the point cap, there’s one more round to allow the others a final chance to surpass them. All the characters are the same in terms of stats, and while player skill is obviously a factor, there just isn’t enough variety to create dynamic, exciting matches. After half a dozen fights, I had seen pretty much everything including all the stages, and frankly I was getting bored.

The only real modifiers come in the form of Perks. Each round, all players can pick from a pool of buffs with the player in last place going first. These Perks include health regen, fire or ice attacks, increased speed or damage, or even the ability to shrug off a fatal blow every 30 seconds. As you pick one each round or can increase the potency of the ones you have, it does introduce some much-needed variety to Hyper Jam. The randomised nature of the Perk selection doesn’t leave much room for real tactics, but it creates at least some depth.

Stages are small, claustrophobic spaces that allow no hiding places or respite. You can use items as cover and for manoeuvrability, but there’s no escaping the fight. Again, this keeps the action fast and frantic, so fights never outstay their welcome. Thankfully, each stage is well-drawn and aesthetically pleasing, even if they are just static boxes in which to murder one another. This is not a bad game, by any means. In fact, some will enjoy the simplicity and pace, while many will fall in love with the neon aesthetic and incredible score. There just isn’t enough of it. There’s room for so much more diversity here; more characters, weapons, and stages, perhaps fighters with different stats and moves. I’m not here to criticise what a game isn’t, but unfortunately it’s hard to play Hyper Jam without wanting more from it.

I don’t doubt Hyper Jam will accrue a following among the online crowd who favour instant action and bragging rights over heaps of content, but ultimately Bit Dragon’s shiny, colourful little brawler has way more style than substance.

Has a cool style
Soundtrack is decent
Combat is fun

Only four characters
No progression or unlocks
Gets repetitive fast