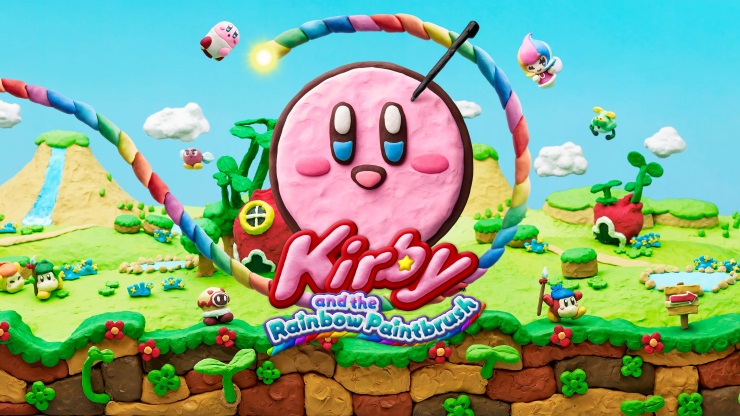 I was playing for quite some time before I realised what I was doing. There was this weird sensation on my face, and my cheeks ached a little. It wasn’t until my girlfriend walked through the living room where and said “good then, is it?”, that I noticed what was going on. I was smiling. Incessantly. Kirby and the Rainbow Curse will do this to your face too, if you let it. It will grab that bedraggled, sad face of yours and give it a new lease of life. Sure, it won’t do much for those crows feet, but sod it, this is gaming and we love good games.

It’s the cuteness that does it. From the opening cutscene, it’s dialed up to eleven. Kirby is seen wandering through dreamland with one of his buddies, when a hole in the sky opens up and a mean character swoops in and robs the world of its colour. This is when a magical paintbrush appears and helps Kirby see the baddies off, in the process restoring colour to this one corner of Dreamland. That is the top and tail of the story, really, it’s simple fare but it does the job well enough of framing what is going on in Kirby’s magical world. All of the in game action takes place on the GamePad screen, requiring use of the stylus to draw rainbow paths which Kirby follows like a train on a track. Kirby can’t stop himself from rolling, and the little fella doesn’t know how to walk, apparently, so it is up to you to keep him safe. Drawing the rainbow lines on the screen, you can guide Kirby towards the multitude of collectible stars and through the levels. Tapping on Kirby causes him to dash ever so slightly faster, making him dangerous to passing enemies. Forget to tap on Kirby before colliding with an enemy, and Kirby will lose some life. The levels start out simply enough, in fact the game is a little too easy for the first third of the story mode, with things slowly picking up from around this point.

There are some brilliantly designed levels to be discovered, though. Swooping through the clouds, escaping from a bomb blast, or even guiding Kirby through underwater sections, each new world seems to offer just enough to keep Kirby’s latest adventure feeling fresh. Nintendo get away with creating a game that is all about performing the same basic actions from beginning to end, because there is an artistry to this Kirby game. The further into Rainbow Curse you get, the more in tune with your brushstrokes you become, and the more fluidly you are able to make Kirby dance about the screen, flinging him this way and that. The joy that grabbed me while exploring Kirby’s world came not only from the simple yet satisfying gameplay, but also in the visual and audible delights it has to offer. As we have come expect from first party games on Wii U, the visuals are an utter feast for the eyes. It’s a tribute to stop motion Play-Dough animations from yesteryear, with every character model, scene and backdrop oozing charm and colour. Some of the charm is lost on the GamePad’s screen, which is a shame because you are never allowed to take your eyes off of the little screen and admire the HD glory that has inhabited your TV. The rainbows Kirby rides on are just that, rainbows, and it is hard to put into words what the combination of endless rainbows, gorgeous animation and brilliant colour can do to a man. It’s shocking, really.

Levels in The Rainbow Curse are broken up into worlds, each with its own theme and visual style. Worlds are book-ended by boss levels, in which Kirby must defeat some truly challenging foes. Quick reflexes and patience will be required to get through some of these levels. It’s fine though, because it’s all just so damned relaxing. Aside from the standard levels, there is a challenge room with around a hundred puzzling rooms. These will test your skills to the limit, with the reward being a few more unlockable trophies and music tracks to add to your growing collection from the game-proper.

The cutesie nature and visual aesthetic won’t be for everyone, but for those willing to give it a go, Kirby and the Rainbow Curse offers a dose of pure joy that very few developers seem capable of creating. Things get a little stale and samey towards the end, but that wasn’t enough to wipe the smile off of my face.

Stunning visual style.
Music you will want on your iPod.
Pick up and play charm.

Massively cute it may be, but this is a Kirby title that packs substance to go along with its drop dead gorgeous style.