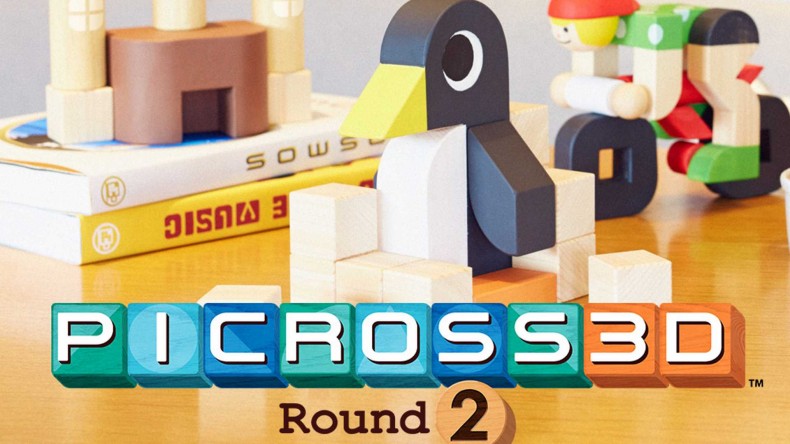 Carving is a hard going, perilous art. You can put in hours, days (or years in the case of things like Michaelangelo’s David), and it could all be undone by one stroke being out of place. In HAL Laboratory’s Picross 3D, you won’t find yourself creating beautiful works of art, but it’ll take considerably less time to see the result.

Unlike Picross, Picross 3D (by way of its name) has you breaking apart large masses and colouring portions to form a sculpture of sorts. Anyone familiar with regular Picross will be at home here as the numbered line system translates well into three dimensions, and as a result many of the same tactics for working out which cubes need to be broken and which to be coloured work just as well here. While Picross veterans will find this easy to jump straight in to, newcomers aren’t left to flounder: HAL has included an extensive set of tutorial levels to help ease you into the basics of blocking, plus they’ve interspersed the levels with a set of challenges designed to assist with learning the advanced tactics, and before long any player will be adept at flagging, slicing and colouring.

To ensure the puzzle results don’t look like they’re made of pixels the cube colourations are divided into two styles – blue and yellow. Blue cubes will retain their shape, while yellow cubes change shape to suit the solution once their row or column is solved. As you spend your time colouring in and destroying blocks no longer needed it becomes really gratifying to see it all take shape (kind of like building a LEGO model) and while you’re trying to work out what goes where you’ll also find yourself trying to figure out just what it is you’re uncovering.

The end-goal here is to solve each puzzle as quickly and with as few mistakes as possible, with larger gem rewards for finishing a puzzle perfectly. Gems are needed to unlock further puzzles in a great move for both veterans and newcomers players can set the difficulty for the puzzles themselves, with higher difficulties granting larger gem rewards. HAL have done all they can to ensure no-one is left out.

The only real complaint I have is that if you’re not willing to hunch over a table, you have to result to a claw like grip on your 3DS to be able to play. This caused me considerable cramping pain across my palm and thumb at any length of time over 30 minutes, which, considering how easy it is to lose yourself in Picross 3D, can occur frequently.

Due to a build-up of personal issues I’ve been a bit stressed of late, and this has been a very cathartic game for me. Sitting there poking away while jigging along to the jaunty music, it’s kept me entertained and distracted nicely on my long journeys and for that I think it’s really quite lovely.

Can cause considerable hand ache

Picross 3D: Round 2 provides a relaxing puzzle experience, while making you feel like a genius whenever you just “get” it – as any good puzzle game should.