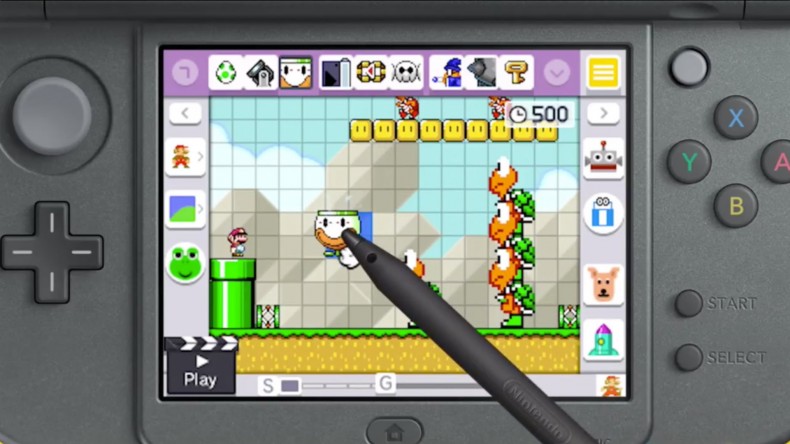 The theory behind putting Super Mario Maker on 3DS is a sound one: whereas the Wii U GamePad is seen as an all-round controller, the primary input for the 3DS has always been the stylus. Pokemon aside, the innovation for the DS on the whole came from that pen-input, the one-to-one feedback, so drawing Mario levels on a screen seems like a natural extension of the original Shigeru Miyamoto idea of plotting courses out onto graph paper.

In 2015, I lauded Super Mario Maker as one of the best games of the year. The addictive couch co-op/versus idea of creating fiendish levels for your friends and family to attempt was only bettered by the fact you could take those courses and, provided you yourself could complete them, upload them to the internet for all to play. So let’s start there: it’s a massive disappointment that this feature is completely absent from the 3DS version. I’m not going to dwell on it for too long, but as a huge fan of the idea (despite the, at times, less than perfect execution) of sharing levels, it’s a bitter let down that even with the unification of Nintendo accounts, this couldn’t somehow be achieved. It’s additionally frustrating because courses created by Wii U players appear in the 100 Mario Challenge, but there is (at least) a slight concession that’s been made. If you have friends who don’t own the game but do own a 3DS, you can still have fun together. Local Wireless sharing means you can even send an incomplete course to a pal to help you finish it, and you can share courses for general play via StreetPass or, again, Local Wireless. The focus for the 3DS edition of this game is entirely on local community, and local play, so know that going in.

The rest of the game is mostly untouched (bar the removal of ability to add sound effects, weirdly), though with some new additions, and there’s no shortage of courses. The Super Mario Challenge is the best of the new modes, offering up 100 levels over four-course worlds that act mostly as a tutorial, teaching techniques you might not be overly familiar with if you’ve not played Mario Maker, or haven’t seen the insane ROM-hack levels people have been designing for years.

But it’s the challenges within these 100 courses that are the true meat of the single player areas, because each course has two optional objectives, ranging from the fiendishly difficult (complete the level within a certain time limit – one that’s always brutally close to the wire of what’s achievable), or the fun with a hint of tricky (carry a POW block to the end of a level that kind of needs you to hit a POW block to make it easy). The challenges are addictive, and show a Nintendo that understands the genre better than anyone else.

There are plenty of lessons for creation, too, with Yamamura (the dove) playing the part of expert Mario level creator, and after playing through each world in the Super Mario Challenge you’ll get new tools to play with, which let’s face it, is a far, far better solution than being forced to come back each day to get new items, which is how the Wii U version initially launched. Mary O (or Mashiko, depending on which you prefer) returns as the “guide” for the game, and along with Yamamura, there’s a lovely sense of humour to Mario Maker, as there was with its bigger brother last year.

As you’d expect, it controls as tightly as ever. Whether you fully get on with it is entirely down to which model of 3DS you have, and how comfortable you find it, but nobody in our house had any issues with it, and although the youngest player found the visuals a little “bitty”, I’m rather impressed with how well rendered Mario looks on 3DS. Not World, or 3, you understand, but I was interested to see that New Super Mario Bros. art style looks fine. Sure, nobody likes it, and nobody uses it for creation, but bar a slight loss of fidelity it still looks really good.

The 3DS version of Super Mario Maker is a weird game to recommend. It has the obvious shortcoming of the lack of online sharing, but it makes up for it with an interesting, fun, addictive challenge mode. It’s a shame there isn’t more inter-connectivity between the Wii U and 3DS versions, because the idea of taking your levels on the go to create and then go home and upload is the kind of thing the Nintendo Switch looks built for. Regardless, this is still a terrific game with plenty to do, that plays brilliantly. As long as you’re aware of its shortcomings, you can happily build courses on the go for as long as you want, there’s just not much point in doing so any more.

A good Mario game with a fun single player, but one that lacks the tools to make it fully worthwhile from a creation point of view.