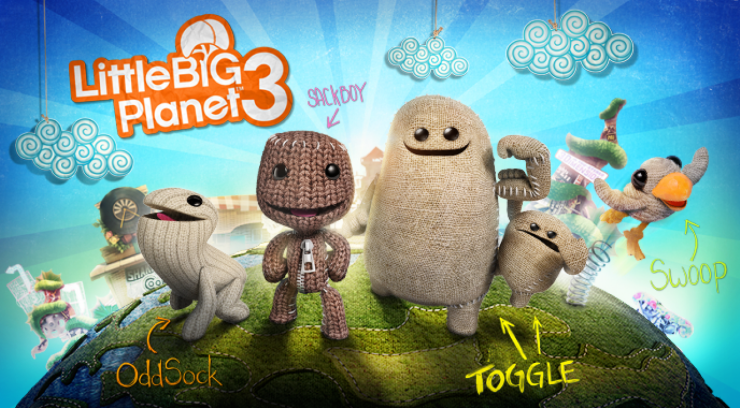 There was a moment, early on in LBP3, where Hugh Laurie’s character, Newton, referred to me as something like “Chappy, Chappy, Chap”. I smirked, and felt immediately very stupid as to how much this had amused me. His upper-class, immediately identifiable voice just caught me out. But then I looked to my wife, and she seemed to find it equally funny, as did my kids. And after a dull, overly hand-holding tutorial that had me incredibly concerned for the third major console LittleBigPlanet (but fifth game overall, not counting the Karting one), it was the refreshing ice-breaker that was sorely needed.

Because there’s a real danger that, this many games in, putting out a cross-generation title that isn’t developed by the creator of the series, things could have gone wrong. Yet somehow, Sumo Digital (who, let’s face it, have phenomenal pedigree at this point) have not only captured the magical whimsy of Media Molecule’s beloved universe, but also managed to create some of the best levels the series has ever seen.

In fact, such is the quality of the level design, that not only did it have me refer to them, to a much confused wife (still, poor soul – she endures so much), as “Nintendo quality” due to the excellent ebb and flow they possess, but also had me question the fact they could even have been made in the level designer. Larger hub-levels give way to the core progression levels, but they are crafted so well, with specific skill-sets and tools in mind. The new power-ups are brilliant, too. The first (The Pumpinator) allows you to suck (L1) or blow (R1) blue objects, and is fairly simplistic. Then you find the gun that allows you to shoot a small orb at a specific blue area, and instantly warps you there (think the Portal gun, only more linear in use). These tools are stored in your sackpocket, which is accessed by hitting the circle button, and are a genuinely great addition to the series, and really tie into the terrific level design. There are some even better ones that I won’t spoil here, but good lord they’re a lot of fun.

Then there’re the new characters. Oddsock is a cute dog-like creature who somehow manages to appear more mentally vacant than even Sackboy – but who plays differently to Sackboy. Being a four-legged friend, Oddsock is faster and can wall jump – the levels specifically designed for Oddsock play like good Sonic levels, as the world falls apart, chasing you out of the level as you jump frenetically from wall to wall. Toggle is a heavy guy, but hitting L1 will change him into a tiny but fast character, offering two very different uses. Swoop is a bird, who can fly and, well… swoop. Each character has specific levels that they are useful in, and it’s a bit of a shame you can’t switch at will. In fact, the story has you unlock each character one by one. It makes sense, sort of, because the idea is that once unlocked, you can go back and reach areas you couldn’t access previously, but it’s also a bit odd to lock them away behind progression, since they are one of the big new additions.

This time around, part of the hook for the user generated content is the ability to design on sixteen layers, instead of the previous three. This plays out into the story levels, too. You’ll find bounce pads that propel you into the vast background and then back again, with sticker bubbles to collect as you do so. The constraint of the thermometer in creation is replaced by a more simple idea: keep going until you run out of hard drive space, and you can lead your creations into other levels in a similar way that the main story hubs are stitched to levels. The new Popit Puzzle Academy is, it seems, a way to blur the lines between playing the story and the create mode. The idea is that it’s a mini adventure that asks you to use the create tools to get through the levels. It’s an interesting idea and it does the trick, as after playing it, I found myself thinking this might be the year I actually get into creating. I won’t, of course, but it made me think I might.

Of course, it all looks gorgeous as well. I’m not going to pretend it looks a generational leap ahead of any of the previous games, but it certainly doesn’t look noticeably last-gen, either. All the cut-scenes are fully voiced, with the ubiquitous Stephen Fry reprising his role as narrator. The voice acting is great, with not a misstep in sight. Indeed a special nod needs to go to Tara Strong, who plays a pitch perfect role, too. In fact, the audio design is wonderful, full stop. Glorious 50s rock plays while you bounce through a level that looks like an Ed’s Easy Diner or Hard Rock Cafe, all while you are guided by a character called Marlon Random (Nolan North); an actor with a huge quiff. It’s glorious.

But it’s not all sunshine and rainbows, and for a fifth game, the opening is painfully slow. Opening real-world cut-scene coupled with Fry’s narration? Check. First control of the character as you walk through the opening credits? Check. Tutorial messages for the simplest of game mechanics? Yep. In fact, it’s hard to know entirely who LittleBigPlanet 3 is aimed at. The opening suggests a younger, less hardcore gaming audience, but right away the first boss battle would be frustrating for most kids, or anyone who hasn’t got a decent amount of gaming experience under their belt. The sprawling, complex level design is definitely aimed at an older audience, and the fact Hugh Laurie joins Stephen Fry in the voice cast must surely be a nod to that generation. All that’s missing is “Please Mr Music, will you play“, or a soupy twist.

As well as the story being far too short (though excellent while it lasts), there are also bugs that will cause you to drop beneath the level, and I had another where Sackboy simply wouldn’t respawn. This was most pronounced during two-player (offline) testing, and not what I’d call frequent – though noticeable enough to warrant mentioning. You also share lives, so if one player is repeatedly dying, that’ll cause frustration for the better player. But overall, this is a tremendous package, full of goodness. It’s hard not to thoroughly fall for Sackboy and his new band of friends when everything is so well designed, with community tools included to extend the life of the game for as long as you can imagine. I’m never going to be the guy who spends hours creating levels for others to play, but I respect and appreciate the fact the tools are there for those that will – and there are some truly creative types out there. On the plus side, however, the jumping feels better than ever, though there are still moments of frustration.

As long as you know what you’re going into, you’ll find so much to adore here. Sumo have done a wonderful job of taking on the LBP mantle, somehow managing to create some astonishing levels that flow as well as the very best in the genre. Don’t expect a revolution, but do expect a jolly good time, and probably the best, most well-honed game in the series yet.

With the best level design yet, this is more LittleBigPlanet, but the new characters help keep it fresh.