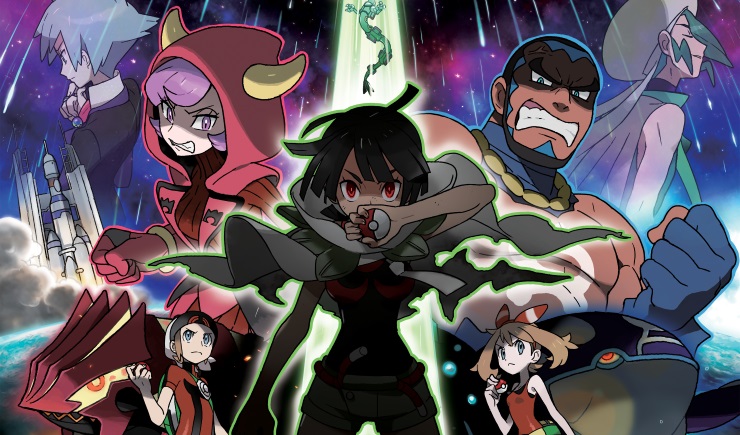 Ash Ketchum is a Pokémon master. He’s also been ten years old for the last fourteen years. Over that time there have been many different games and the show has moved with them to include the larger roster of imaginary battle creatures. We’ve seen Ash through his trials and tribulations, and grown up while he has stayed the same. When a new game comes out, child fans will buy because of its relation to the cartoon, but it’s also a game for the people who have grown up with the series, the adults who have that Ash Ketchum who never grew up deep inside of them.

So, we come to two new Pokémon games. But, they’re not new are they? They’re old. Sapphire and Ruby have re-emerged as Alpha Sapphire and Omega Ruby. Don’t be worried, these aren’t just rehashes of existing games, they have been completely rebuilt in the engine used for Pokémon X and Y. These are proper remakes in every way. This tale follows the well worn template of every Pokémon game. You’re a young child, events occur that lead to you obtaining your very first Pokémon, and that is where your adventure begins. As is par for the course in this land, you leave home at the age of ten, scouring the region for animals to recruit and fight alongside you in your quest to beat gym leaders and go on to defeat stronger opponents to become a Pokémon master.

Game Freak have taken the plot and structure of Sapphire and Ruby and shoehorned elements from X and Y into it. Your Pokédex allows you to monitor Pokémon training conditions, play with your Pokémon in Bel Amie, and scour the internet to find other masters to play against. But this has been expanded upon. You’ll now have constant access to a map, a Pokémon detector, and TV news reports by hitting the tabs on the bottom screen.

The News reports are a neat touch, as when you give interviews on your journey the newsreader will read them out. That in itself doesn’t do much, but it’s nice to see it on screen rather than investigating the TVs in people’s houses that you’ve invited yourself into. It’s the other two new Pokédex functions that really change things.

The Pokémon detector will show you silhouettes of the Pokémon in the area you are in, and as you catch them it fills those silhouettes in so you can keep track of what Pokémon you have and haven’t managed to catch, making it considerably easier to manage to track down those more elusive ones. A secondary feature of this is that at times some Pokémon will appear by way of an animation in the grass or water, whereby the Pokedex will alert you to their presence. By lightly pushing on the analogue nub you can sneak up to and engage in battle to catch them. Stats wise, they’ll be the same as the other Pokémon in the area, but they will have a rare move that you won’t get with the regular creatures. It’s the map that really changed things, though. Granted, it does what a map should do: it points out towns, cities, routes, and locations of interest. Along the way you’ll meet other trainers who engage you in battle, and winning these will reward you with XP for your Pokémon, and cash to buy stuff. In previous iterations you could only ever fight these people once. Now, though, the map will alert you to any trainers along the route who are able to be engaged again. It won’t tell you their precise location, but it will tell you the person and the Pokémon they had. Their team will have levelled up somewhat from the last battle, too, making it much easier to grind XP during the main story and after the end game. This was a major bugbear in past games, so I’m happy to see that it has been fixed.

But that’s not all that’s new. On your way you will notice small notches in mountains, rocks and trees. For these, a new use has been given to the move Hidden Power. Using it on these places will open up a secret base which you can decorate to your liking using rewards you are given, or (later on) items you purchase. It’s not much, but you can use it as a rest spot to heal your Pokémon during a bout of farming. You can also invite your friends to your secret base, and doing this allows you to indulge in Pokémon battles with them, for which you can even set the default rules for any battle partaken. Sadly, you can only have one active secret base at a time.

The Pokémon talent contests have been improved too. They’re still set into categories of beautiful, cool, cute, and tough, with the moves you use garnering support from the crowd. You can now improve the stats of those categories for your Pokémon with Pokébloks. These are made by putting the berries you find on your journey into a machine, which in turn creates a “blok”. Feeding these to your Pokémon increases one (or all) of their contest stats. The rock, paper, scissors battle element is still intact, and a good knowledge of the Pokémon names will see you through many battles as you switch your Pokémon to combat the type that your current foe is about to throw into the fight. As with previous games you probably won’t find that much challenge in the main story, and the difficulty hits when you approach the home stretch. The new version of the XP-share makes a return, and although it does still feel a little bit like cheating, it is the best way to ensure your team stays well rounded and to level up any weaker Pokémon.

Of course, the story is still overly twee, and the battle engine stutters and grinds during certain match-ups. Certain routes are a hell of a slog when they’re covered in grass (and littered with trainers), and the nearest Pokémon centre is ages away. You are still frustratingly limited to a single save file. Considering Nintendo’s own Zelda games allow you to have three, this backwards thinking still baffles as it means that multiple people cannot share a single copy of the game. These quibbles are minor though, and definitely won’t put off anyone who is a fan of the series. They shouldn’t put off non-fans either, considering the core game is so good.

This is, quite simply, the best Pokémon game yet. It’s taken the existing formula and made the right changes that it desperately needed. If you love the series it’s essential. If you like RPG-lite games it is still highly recommended.

Easy to get into.
Finally able to re-challenge other trainers.
Plenty of additional stuff to do.

Perfect for long time fans and new ones. This is the definitive Pokémon title (until the next one at least).