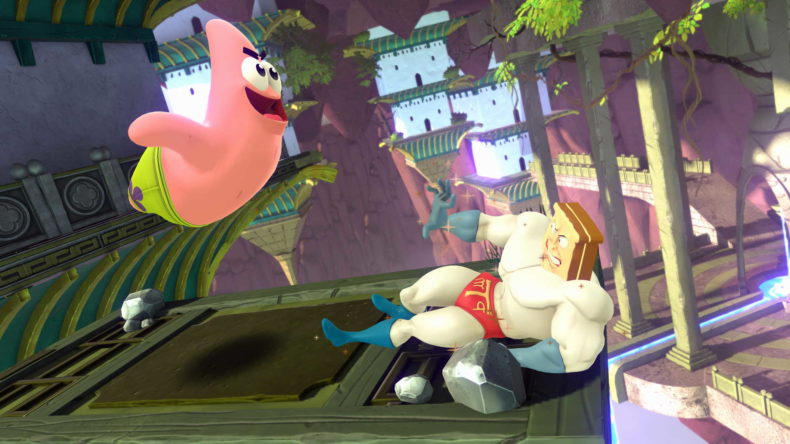 Imitation is the sincerest form of flattery, as they say. And I doubt anyone will play a knock off as blatant as this one in 2021. Nickelodeon All-Star Brawl is so obviously “inspired” by the Super Smash Bros series that even the introductory menus and character select screens are instantly familiar in their execution. But that is exactly what developer Ludosity is aiming for. It has not been backwards in coming forwards in revealing that this title, which on the surface looks like a standard piece of tie-in shovelware, was made with an eye on it being competitively viable, with fast paced and uncomplicated gameplay that mimics all kinds of little bits and pieces from the Smash-iverse.

You choose from a roster of Nick faces, drawn from their rich heritage of madcap entertainment. There are some big hitters – a couple of Ninja Turtles, the ubiquitous Spongebob and Patrick – but also some cracking inclusions like Nigel Thornberry, Catdog (who is particularly fun to play with) and one of the funniest characters to appear in Ren & Stimpy: Powdered Toast Man. 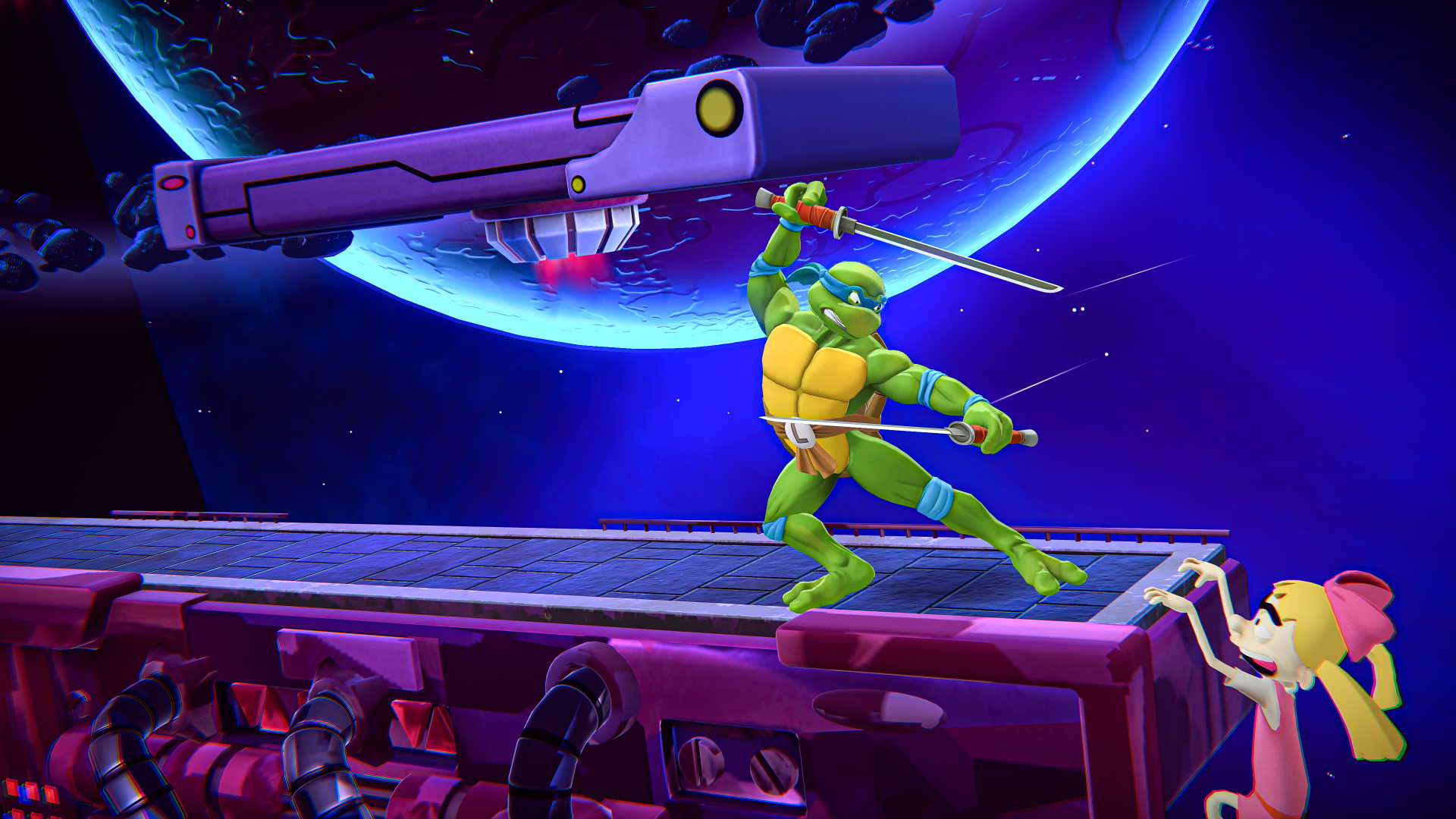 Each character has three different attacks. You can also grab your opponent and throw them, taunt and block. The jumping is mapped to a button which will be a little off putting for Smash vets coming into this, but it didn’t bother me at all after a couple of bouts. There are loads of attacks, as you can vary each of the three strengths with an up or down directional modifier. Everything moves along nicely and the characters all have a different feel, with specific quirks and abilities that make finding a favourite good fun. There is no getting over the fact that some of the moves are directly ripped from equivalent attacks and specials from the Nintendo crew, and experienced players will be able to identify and exploit them accordingly.

Gameplay is pretty much exactly like a Smash game, with the only difference being that there are no weapons and very little environmental gimmickry. It is very simple in its looks and presentation, with the focus on the actual battles themselves which are genuinely entertaining and work well online thanks to some rollback netcode. It’s just a good old simplistic battle that is fun to play, easy to learn, and doesn’t test your grey matter too much. 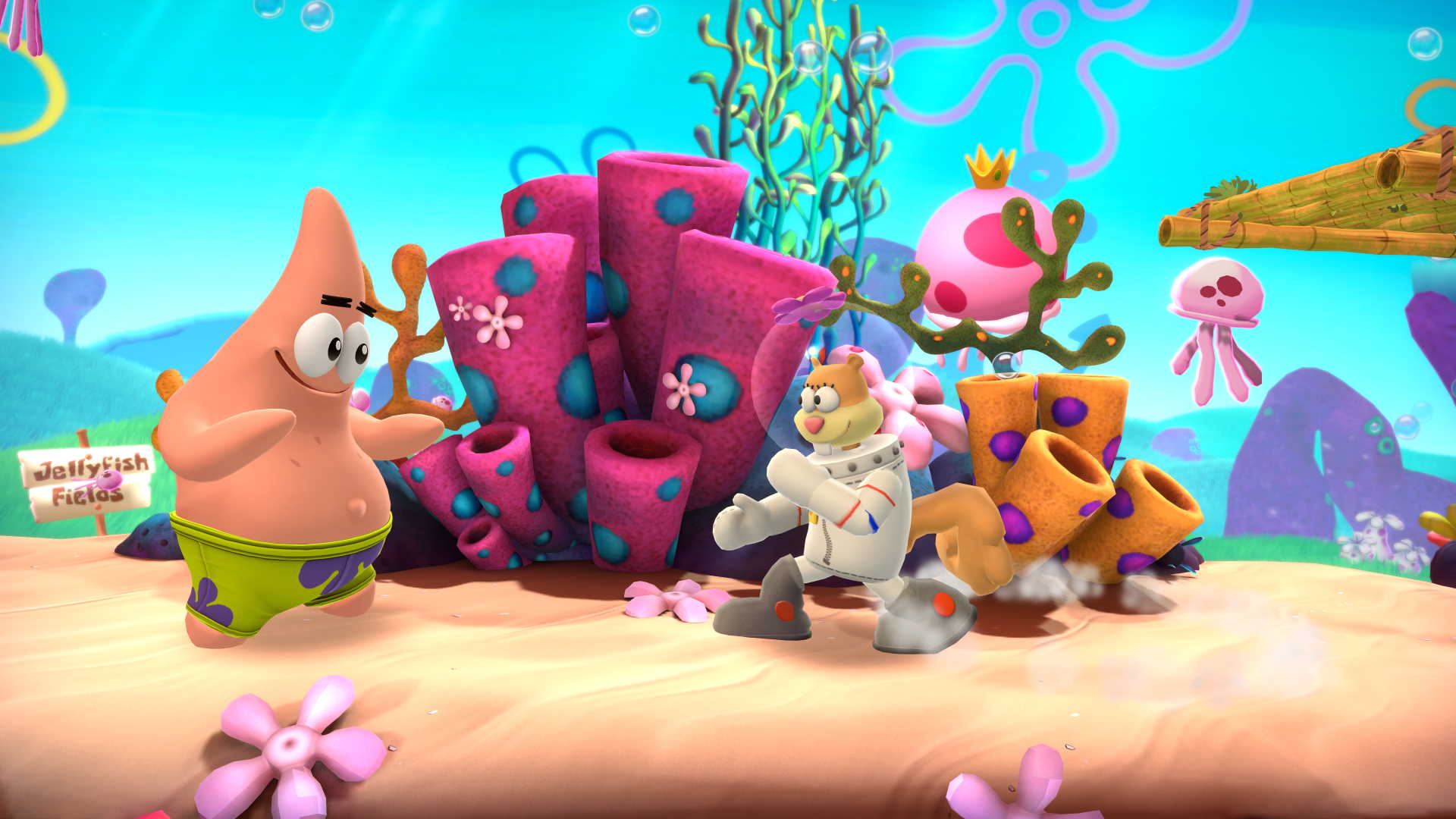 Where it loses marks is in its presentation and respect toward the source material. It’s a bare bones affair with only a couple of playable modes. The tutorial is a diabolical series of slides. There are a few unlockable bits of artwork and avatar pics, but there really should be a lot more when dealing with so many popular, diverse, and much-loved characters. And worst of all, there is no voice acting from the characters, or identifiable tunes and other media from Nickelodeon. Instead, characters exchange dialogue in text boxes. It feels like they completely missed a trick here. Some will also point to missing characters, with some glaring omissions from Rugrats and one of my faves Rocko’s Modern Life – but I strongly suspect DLC will be very much on the horizon.

Until now, there hasn’t been a real contender to the Nintendo IP in the platforming arena fighter stakes. I would go as far as to say that the nearest rival would be the 20+ year old Power Stone games. And this isn’t a bad attempt at all. Sure, it is derivative, but it plays well and I if anything simpler and easier to get your head around than some of the more chaotic Smash games. It should also be in the conversation for the best Nickelodeon-based game to date.

Bare bones
No voice acting or music from the tv

Probably the most fun you can have in a Nickelodeon videogame, this is a derivative but fun fighter that kids will enjoy, but will probably do quite well in the competitive community too.