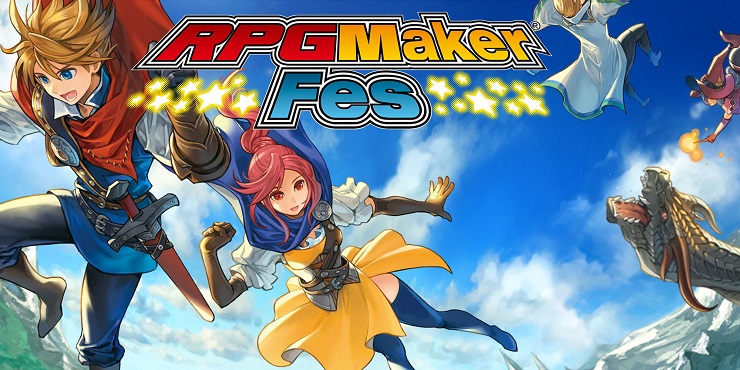 It’s hard to review something that isn’t a game within the context of being a game. Kadokawa Games RPG Maker has been available on PC for a while now, giving prospective world builders a way of bringing their idea of the perfect Japanese style RPG to life, and in that regard it succeeds, but it doesn’t make it easy to do so.

No one ever said making games is easy; it’s a multi-faceted process that can take years to do. You’re talking art, sound, writing, AI routines and countless other elements all to put together one game. RPG Maker FES aims to help you by stripping out most of the complicated stuff and just asking you to build the worlds, put in the NPCs, and create the battles. Creating a world is as simple as specifying a size of map and then drawing onto it with map tiles to create lakes, bridges, towns and dungeons. You can link maps together to create other continents as well as the towns and multiple floor dungeons. This part is easy, making the locations compelling places to visit is more down to your ability as a designer rather than something the game can help you with.

Outside of creation you have the database area, which contains oodles of options with which to customise the smaller elements of your game. You can name characters, create weapons, assign damage properties and health values, you can also create character parties, monster groups and AI routines for them. There’s an exceptional wealth of assets here too, including character avatars, portraits, buildings, monsters, scenic elements, landscape tiles, all with enough variety to be able to create what you want to make (within the boundaries of the game’s own art style of course). There’s also a considerable amount of DLC content, some free, others available for a premium, so if you’ve spent enough money you’ll find plenty to crack on with here, but if it really gets its hooks in, you’re free to spend a bit more moolah to really go to town with your creations.

Where RPG Maker FES falls down is in the way it forgets to help users understand how to use it. It’s a gloriously comprehensive toolset but one that confuses and obfuscates with poorly worded tooltips and a terrible lack of explanations. I spent a long time trying to figure out how to create a fight event, only to then realise I had to exit out of the actual ‘creation’ part and go into the database area that I mentioned earlier instead. This is only explained briefly and in no real detail through the game’s electronic manual. It wouldn’t be so bad if the manual was helpful, but all it does it gives you a point of reference of where to look in the first place – it doesn’t tell you how to use certain functions. There are no tutorials to teach you the basics, there are loads online, but that’s not helpful when you’re out and about, or abroad. The manual contains basic info on most of the elements, so it is some help, but you’ve got to go to the home screen, hit manual, find the section, read it, go back to the game, try and find what it said, then figure out you can’t then go to the manual and check again…a decent set of tutorials would have negated the need for a manual, and the faff associated with it.

You look at what is currently available through the (admittedly clunky) downloadables area and the quality of experience that can potentially exist is apparent, with the better examples still being works in progress and taking over 40 hours to create, I can’t help but feel that this would be improved immensely with Kadokawa just giving users a little helping hand. It’s commendable that this is RPG Maker’s one flaw, but it’s one of such magnitude that it can sully the whole creation experience.

And this is where I am; stuck between understanding how good this toolset is, but also knowing how unfriendly it is to those not familiar with its intricacies. Many people may pick this up wanting to jump right in to creating silly little things, only to find themselves frustrated after hours of work because the silly little monster fight they wanted to make still isn’t working properly and they just don’t know why.

RPG Maker FES really wants you to make the games you want, but doesn’t want to help you out in any way.