previous
Assassin's Creed Chronicles: China Review
random
next
The Evil Within: The Consequence Review
1 like 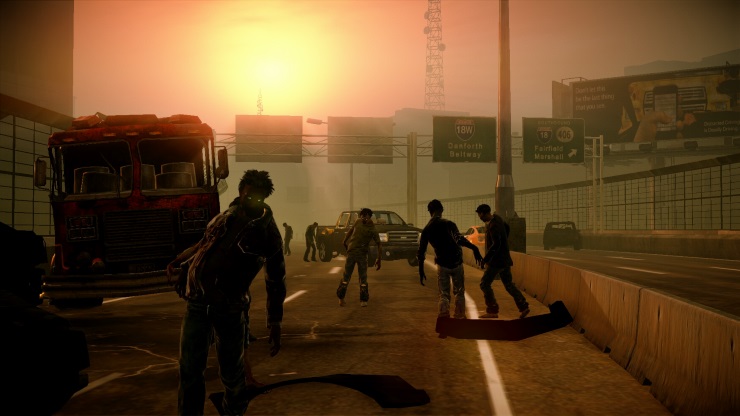 State of Decay has been something of a labour of love for Undead Labs. The vanilla version hit Xbox Live in 2013 and was mostly held back by the glaring and multitudinous technical issues. Inconsistent textures, immersion-breaking pop-in, poor lighting, disappearing zombies, erratic AI and horrendous framerate drops plagued State of Decay, and even the raft of patches and add-ons couldn’t panel beat the game into shape. It seemed that no matter what Undead Labs tried, their reach was simply exceeding their grasp.

However, after two years, a stack of hot-fixes, two expansions and one console generation, State of Decay is finally, tantalizingly, mouth-wateringly close to Undead Labs’ original vision. What a difference a generation makes.

The Microsoft-exclusive zombie survival sim takes place in the fictional US city of Danforth and the surrounding countryside of Trumball County. Initially thrust into the shoes of Marcus Campbell, a twenty-something regular Joe returning from a fishing trip to find his city overrun by zombies, you’ll actually play as a smorgasbord of characters throughout the narrative, body-swapping regularly to allow tired or wounded survivors time to recuperate. After meeting ex-soldier Maya Torres, you lead your bitten friend Ed to an enclave of survivors holed up in a church within the city, from where you strike out into the infested suburbs to scavenge and explore. One of its greatest strengths is the script, which, although unlikely to trouble Hollywood any time soon, does a solid job of making you emotionally connect with the cast of characters. You’ll hate some instantly, others you’ll eventually warm to, some you’ll immediately trust with your chosen avatar’s life. The sense of being thrown in at the deep end with everyone else is palpable, and creates feelings of genuine tension when someone doesn’t return from a supply run you sent them on, or worse, goes down in front of you because you simply couldn’t get to them in time. It happens now and then, and if it’s a character you liked playing as or working alongside, it’s genuinely upsetting.

Your main role, regardless of which character you body-hop into, is to provide the enclave with supplies – medicine, food, weapons and ammo, and building materials – while establishing outposts, bringing in other survivors and rooting out zed infestations around the city. Later on, you’ll be dodging the military who are out in force to impose a curfew, and you’ll be dealing with more and more “specials”, from gargantuan Big ‘Uns to stalking “ferals”, screamers, and more. For the Year One Edition, combat has been tightened considerably – but that owes a great deal to the improved framerate. X employs your equipped melee weapon – or whichever weapon your character whips out of nowhere if your melee weapon breaks – while the triggers utilise your equipped firearm in the usual way.

Of course, guns should only be used when you’re desperate or making a frantic escape; they may be effective, but they’re also loud. Noise plays a massive part in State of Decay – so much so that holding LB down while performing actions actually increases speed and noise. Rummaging through closets, drawers, toolboxes and refrigerators takes time. Holding LB gets the job done faster but makes a racket, attracting nearby zombies. Likewise car horns, gunshots and running will get you noticed fast, forcing you to take it slow and steady where possible. Going out in the day is the most sensible option, as there are less zombies around and you can see them at a distance to sneak around them; sadly, though, you can’t advance the time of day and so if you don’t go out at night, you’ll spend a lot of time listening to fellow survivor Lily talk to people on the radio. While the vanilla game has a proper narrative to follow, the add-ons (both included here) don’t. The first expansion (Breakdown) takes the form of a persistent endurance test, seeing you rounding people up in a huge RV and taking them to a new outpost, which must be defended until the RV is repaired – at which point it starts again. Eventually, you’ll die, but the fun is in seeing how many circuits you can survive. In this mode you pick your character from a large roster of unlockable survivors and essentially just try to keep as many people alive as you can, for as long as you can. The tweaks it added to the vanilla game such as the ability to take a friend out on missions with you, and the option to load scavenged gear into a vehicle, are carried over into the Year One Edition, too.

The other add-on is slightly more in-depth and, without a doubt, the most fun you can have within State of Decay’s world. Lifeline puts you in charge of Alicia Hawkes, commander of Greyhound One, a military outfit attempting to suppress the zombie infestation in Danforth. Switching between Alicia and the members of her crack team, your job here is to secure artillery sites, vehicles and survivors, rounding them up inside your base and protecting them until evac comes to take them to safety. Fully stocked with guns, ammo, medical supplies and melee weapons, your forward base is a perfect place to make a stand when the approaching chopper attracts hordes of hungry zombies and you’re forced to make a stand and defend the people you’ve corralled.

There’s a huge sense of accomplishment in Lifeline every time the chopper lifts off with new survivors on-board. Every siege is a thrilling, life-or-death encounter, punctuated wonderfully by personal rescue missions that take you out into the surrounding areas. It’s easy to emote with the characters in State of Decay, and that’s arguably more potent in Lifeline as you’re not just bringing them into an enclave and letting them fend for themselves; you’re responsible for the protection of each and every civilian you rescue. It’s a shift to the established dynamic that creates moments of real tension and suspense, despite Lifeline’s more bombastic, arcade-styled leanings. The whole experience is much more cohesive than before, uninterrupted by bad textures and game-breaking framerate drops, and the graphical polish is hugely welcome. The improved lighting really brings Trumball County to life, never more-so than when you’re charging through a wheat field with a dozen zombies behind, and you just want to stop and admire the sunset. There are still moments of slow-down and the AI isn’t quite on par (allies often block you in behind counters and such, while zombies occasionally stop chasing you for no real reason and wander off), but the overall package is vastly improved.

Exclusive character Gurubani Kaur rounds off this edition along with a new vehicle and weapon available via airdrop when you start playing. Gurubani has improved stamina, a unique appearance and two awesome Indian sabres that deal massive, lightning-fast damage to zombies. Alongside added challenges, a handful of new weapons and more achievements, there’s a lot here to bring you in even if you played State of Decay on 360. For those who have never played it but enjoy survival sims or zombie games in general, I’d argue that State of Decay: Year One Survival Edition is essential. There’s even an automated DVR that will record achievements and impressive zombie kills for you to share later. The performance enhancements and graphical polish are enough to finally bring State of Decay in-line with Undead Labs’ original ambitions, and provide an exciting, addictive and involving experience that deserves its place in the Xbox One’s line-up.

Read our original State of Decay review, our Lifeline DLC, and our Breakdown DLC review.

Undead Labs bring their zombie-survival-sim to a new generation with heaps of content and loads of fresh polish.

You may also like
Microsoft StudiosState of Decay: Year One Survival EditionPC