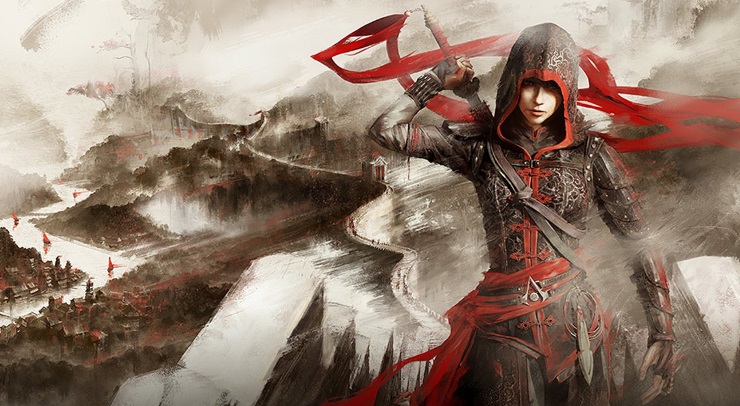 Ubisoft’s plot-holing, history-cribbing, annual series of open world games started in 2007. Since then, we’ve seen eight main games and a heap of spinoffs in their double-digits, and still, the gigantic Gallic outfit are far from giving the series a rest. Despite the occasional high point (II and Black Flag especially), as a follower of the series, even I can see that there is some great difficulty in sustaining the amount of entries the series receives.

But that’s not to say that there isn’t room for something a little different. The lore of Assassin’s Creed extends far beyond the games, bleeding into novels, comics, animation, and more. This extended lore rarely has a go at being immortalised in the games themselves, which makes Assassin’s Creed Chronicles: China such an interesting proposition. The first of three adventures (India and Russia will follow), the open world gameplay that the series is known for has been replaced by a side-scrolling action-platformer, almost Prince of Persia-like, in fact.

For the very first time, former Concubine-turned Assassin Shao Jun gets her chance to shine. Introduced in the animated short, Embers (which I actually covered all the way back in 2011), this chronicle takes place two years after that short film, wherein her paths crossed with the one and only Ezio Auditore da Firenze. Back in China and spearheading the restoration of the fallen Brotherhood in this region of Asia, this tale is told through animated scenes drawn in a pseudo-traditional Chinese brush-painted style. It’s an aesthetic carried over into gameplay, with environments filled with water coloured textures and brushed lines. The hues may be subdued (maybe even drab), but it’s purposeful when it comes to the oriental setting. You can count on some stereotypically Chinese woodwind and string instrumentals to envelope the game play as well, pieces that are definitely of the style we’re used to from this series. Meanwhile, the spoken dialogue isn’t too much to write home about, and it’s a little unusual not to hear Roger Craig Smith reprise the role of an older Ezio during the training sequences. All in all, it’s not quite up to the presentation standards of the main series, but it delivers something stylistically different while remaining true to the Creed.

Bizarrely, this is far and away the stealthiest entry in the series so far. Granted, there are moments when you could easily dispatch of enemies with some good old-fashioned swordplay, but there will eventually be times when you are seriously outnumbered, and such bravado becomes incredibly reckless and will only end in failure. The ranking system clearly favours those who keep their enemies unaware of their presence (with the shadow rank), as opposed to stealthily taking down foes (assassin rank), or going in loud and killing everything in sight (brawler rank). Points are earned in each level, with the cleanest and quietest approach earning the highest scores, which serves to unlock extra abilities and attributes when particular scores are met. The controls feel like a modern-day Prince of Persia, with Shao Jun sprinting, climbing and leaping around a 2.5 space, sometimes darting between different planes of perspective. Environments are subtly splattered with red brushstrokes to indicate that there’s somewhere to climb or interact with, which makes for some very intuitive navigation throughout each environment. There are (of course) a few collectibles hidden in each level, serving to offer either gameplay bonuses or snippets of narration. And these are quite welcome, because this is an offering that is strangely light on story when compared to the ocean-sized saga that the main series weaves.

Something that should be praised is the approach to adding variety in an admittedly limited sort of game. At the end of practically every level you are given some sort of new ability, and unlike too many games, these abilities are incredibly useful and fun to use. It can be a case of trial and error to find the best approach of navigating past an area, but that’s part of the enjoyment here; using the tools you have in a way that’s appropriate to the situation. There are a small handful of levels that forgo stealth entirely, requesting you to get from A-to-B as quickly as you can, which are well-placed to avoid fatigue from the standard gameplay.

This is a download that can be consumed relatively quickly (around five or six hours), but there are opportunities for replay value in the plus and plus hard modes that are unlocked upon completion, and allow you to replay levels to get higher scores and unlock more abilities – as well as to grab those collectables that have been missed. Plus hard also restricts you to having one bar of health, with tougher enemies that makes for a game that is even more reliant upon stealth than before.

This is a game that feels quite removed from the standard Assassin’s Creed gameplay, yet still feels like it should fit within the series. It may lack the presentation and high production values of a typical Ubisoft blockbuster, but this is enough of a departure to offer something a little different, even for those who tired of the series long ago.

Feels like a classic 2D action platformer.
A fresh take on the series.
New abilities are given often.

Narrative isn’t up to the usual AC standards.
Visuals are a little dull, despite the aesthetics.

A refreshing take on the extended fiction of the series, and the most stealthy to date.