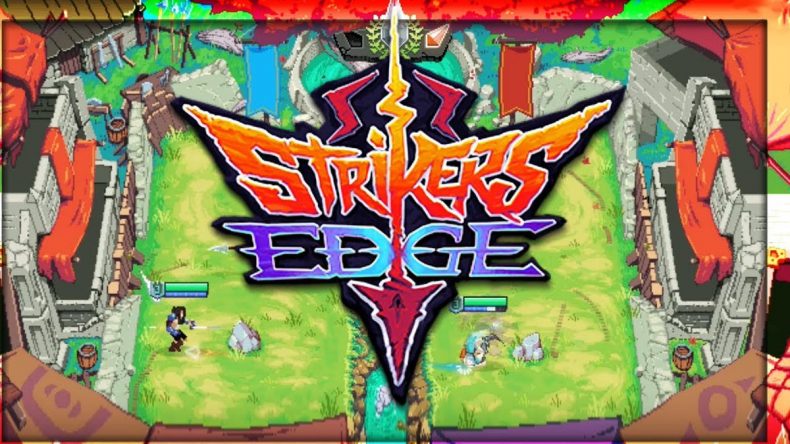 They never had dodgeball in medieval times. You have to wonder if they had the balls to do so, pigskins couldn’t really be inflated to the degree required. As a result they would have to fall back to the weapons they had and had a penchant for throwing, funny isn’t it, things on chains, spears, bow and arrows, but no balls, I think they had their priorities wrong,

Anyway, medieval dodgeball is the name of the game here; you and a foe will find yourselves accommodating separate sections of a court throwing things at each other until one of you falls over. Granted, not everything is medieval, there’s a degree of fantasy with a witch that throws spells, a Valkyrie, and an elf, but at the end of the day, this is a dodgebrawl, so these are attacks, rather than a good spirited game.

You throw by pressing R2 and aim using the right stick, you can then defend yourself by blocking which consumes a block charge, or by dodging which uses up stamina. Arenas are split into halves, with an obstacle or two placed to give you some respite should you be finding yourself inundated with attacks. Some arenas also carry hazards, like the guys who push you back into action on the boats, or the ice storms in the ice arena. There’s a forgettable story mode, and single player practice should only be used as a way to improve your aim. Even on the lowest difficulty the AI’s cursor follows your movements exactly and they do not make mistakes with their aiming. This makes anything other than competitive play incredibly un-fun, thankfully when you’re playing with others things improve immeasurably.

Me and my son had a good laugh in the games we played, we weren’t exactly in paroxysms of laughter, but we certainly enjoyed ourselves. My son shrieked with delight when he managed to win rounds and beat the cushions when he lost. As a boy who wasn’t keen on playing in the first place this is an achievement, as attempts to get Alex interested in anything have proven fruitless, but he took to this as well as he did with Towerfall, which is a considerable boon for Striker’s Edge.

Where Striker’s Edge falls down is its lack of things to do. You can practice, play locally or play online, there’s the story mode I mentioned earlier but that’s barely worth mentioning at all. There’s a lack of ways to customise the play experience, there’s no options, no power ups, it’s either 1v1 or 2v2, and that’s it, this is a rare example of where earnable unlocks and customisation options would have improved the game’s appeal considerably. Striker’s Edge is likeable and great fun with friends, but there’s not a great deal to keep coming back to.

Striker’s Edge harks back to the time of 90s arcade sports titles, and it’s just as fun but short lived as they were.

Strikers Edge is now available on PS4 and PC

Dungeon Encounters review
9.0
Back 4 Blood: How to unlock the other characters
Metroid Dread: How to beat the final boss
Metroid Dread: How to defeat the purple EMMI on Ferenia
Far Cry 6 | How to play co-op
How to transfer your Nintendo Switch data to the new OLED model
How to transfer your Death Stranding save file to Director’s Cut
Social Media
SUBSCRIBE
All content copyright GodisaGeek.com
Fonts by Google Fonts. Icons by Fontello. Full Credits here »
Posting....