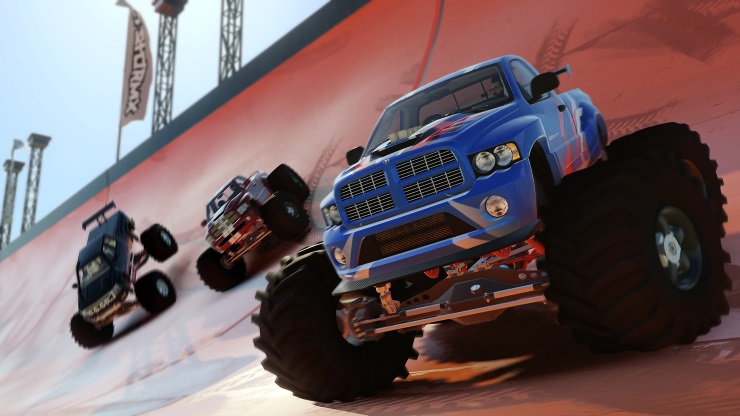 It takes a lot to keep players interested in a game these days. A month, maybe two at the outside (unless you’re talking Call of Duty, Destiny or FIFA), but a year? No chance. Twelve months since the release of The Crew, Ubisoft is trying to tempt you back into its open-world racer with the release of Wild Run, a hefty chunk of DLC that improves the visuals and adds a new competition to test your skills in.

Okay, technically that isn’t true. The graphical upgrade is actually free for all players via a patch. While it does improve the look of The Crew, in all honesty it doesn’t bring it up to the level of the recent Need for Speed, let alone the likes of Forza Horizon or DriveClub, and even if it did, a better looking version of a game isn’t a major reason to go back to it (yes, I am aware remasters exist).

Luckily the new competition, The Summit, fairs better. Moving away from traditional racing, The Summit sees you perform stunts around arenas in monster trucks, drag race across salt flats, and perform drift trials in new Extreme-spec vehicles. Scattered throughout each month are a series of qualifiers, challenging you in different events. Earn enough medals in these and you’ll be invited to the full event towards the end of each month – although your first entry is gratis. Come top of the pack on the online scoreboards and you’ll net exclusive vehicle rewards. These events are good fun. Monster truck stunts are as ridiculous as they sound, tackling loop the loops and pulling backflips, and they are a welcome break from the often dry racing of the base game. Drag races are alright too, challenging you to heat your tyres up enough beforehand, hit the gas at the right time and manually change gears as you go, and I don’t think I need to explain how drift trials work.

If that doesn’t sate your desire for more content, Wild Run also brings new Freedrive events, and it’s here things start to get a bit dull. First off, these things are littered over the roads of America, so you’ll accidentally pull one up whenever you try to drive anywhere. While they’re not too intrusive, an objective challenging you to drive on the correct side of the road for a certain amount of kilometres is hardly thrilling. Others ask for a certain number of near misses and such, but they’re never that much fun, feeling like the open-world busywork other Ubisoft titles are often plagued with. Wild Run also adds motorbikes to The Crew’s miniaturised USA, replete with a new handling model. More agile than cars, they’re a nice addition, if not a game-changing one. What kills Wild Run, though, is the other players – or the lack of them. The whole premise of the base game was to have other players in your game to join in races with, and while the infrastructure is still here, the players aren’t. Yes, my regular sessions had other players in the open world, but none that ever wanted to join a crew. It’s all very well for each mode to have rankings, both friend and world, but it’s hardly engaging seeing other players’ times when you could be racing with them.

The nail in this DLC’s coffin, however, is the price. At £24.99, it doesn’t offer anywhere near enough to justify the cost – especially when you think The Summit is only available at select times. You can’t fault Wild Run’s ambition, but it ends up feeling a little average, with flashes of fun buried in the uninspired handling model and races of the base game. Only real diehards who haven’t left The Crew already will find Wild Run worthwhile. For those who have already left, this isn’t the time to jump back in; but neither is it the time for those of you who haven’t played it to get involved, especially when there are better offerings out there.

The Summit is an interesting idea.

High price.
Not enough content.
Too much open-world busywork.

A high price point and lack of players means Wild Run won’t tempt you back.

The Crew 2 closed beta begins on May 31

The Crew 2 driving to a June 29 release date

The Crew: Calling All Units Review