Mordheim: City of the Damned Review 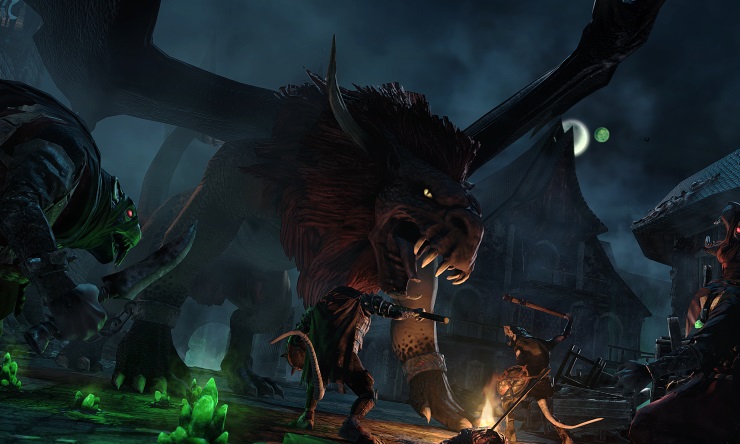 “Divest yourself of mercy and pity. They serve only to weaken your determination. It is only the strong who will earn a place in the glory of chaos.”

After my first defeat in Mordheim: City of the Damned, those words appeared on the screen, and in a heartbeat I knew what kind of world I was being forced to exist in. I knew that every battle was going to push me to the limits, every enemy was going to want me dead more than anything else and in all the madness, all the rage and the pandemonium, I had to prevail. I had to divest myself of mercy and pity. I had to do better.

Mordheim is a wretched place full of death and destruction. The streets are filthy, rotten, and devoid of hope, and the hulking buildings lost anyone living in them a very long time ago. Devastation flowed through the city of the damned thanks to a twin-tailed comet. It hit Mordheim and caused mass destruction, leaving its residents homeless, desperate or dead. In its wake lies an alien substance called Wyrdstone (or Warpstone) and it holds a great deal of power, capable of turning the weakest of souls into despotic monsters. There are many factions trying to gain control of the ravaged Morheim, and it is your goal to collect as much Wyrdstone to sell to these factions as possible, netting as much money as you can in the process. You take control of a Warband made up of criminals, villains, warriors and thieves from one of the four playable classes: Human mercenaries, the Skaven, Sisters of Sigmar and the Cult of the Possessed (my class of choice). As in many Warhammer video games, you are given plenty of information on the classes and their history, so if you aren’t familiar with the 1999 board game it was based on, you’re given all the information you could possibly need. After playing Blood Bowl 2 recently, it’s evident that Games Workshop encourage you to delve into its rich lore, welcoming you with open arms as opposed to keeping you at arm’s length.

There are plenty of options to customise your ragtag bunch of soldiers, ranging from enchantments on your equipment, changing your name and altering the colour of your armour and clothing. In a bid to make you feel a part of the Warhammer universe and allow you to create a part of its legacy yourself, Rogue Factor gives you the option of creating a personal bio for each individual warrior in your Warband. This doesn’t have any bearing on your progress or the story, but encourages you to immerse yourself even further, helping you to feel more of a connection to your team. As you progress, you will sell more and more Wyrdstone, giving you more coin to buy weapons, armour, upgrades and enchantments along the way – a basic premise in any other game. In Mordheim: City of the Damned, you have a certain amount of time to raise the money needed to pay off your primary faction (and in time, secondary factions). The game has a continuous day/night cycle which you can advance after every battle; with every 24 hours that pass, the time left to pay off the factions diminishes, so you need to play smartly. It is just as much about scavenging as it is about victory; if you don’t have the money needed to upgrade your Warband, you’ll never be able to advance through the more challenging and brutal battles. Having enough money is also important when it comes to paying the upkeep on your hideout and the wage of your Warband; if you fail to do this they’ll disband and you’ll be back to square one.

If you feel that your Warband is struggling to reap the benefits of battle in the campaign mode, you can take part in skirmishes, online battles that aren’t concurrent with the main story, but offer you the chance to earn certain benefits. You can take part in exhibitions that give you more experience on the battlefield and are just for fun, while in contest mode you can fight for real rewards that you’ll be able use for your Warband. Just be aware that any injuries you encounter in contest will affect you in the campaign. The gameplay in Mordheim: City of the Damned is similar to the turn-based strategy of the Games Workshop board games. Each member of your Warband has a limited number of offence points and strategy points, allowing you to advance further and use more turns/actions against your opponent. Every action has a chance of success or failure and you need to be smart when choosing whether to strike, parry or dodge; Mordheim is a game of percentages, but unlike Blood Bowl 2, it doesn’t feel random or unfair. You may not always win, but you won’t feel like the AI is enjoying a higher success rate than you.

If any of your team get injured, it will affect you with future missions, meaning rest will factor into your plans. Going back to the subject of the day cycle, time heals all wounds so make sure you play it smart when deciding whether a potential final attack is worth the risk. If anyone dies, that’s it – you will need to hire someone new to replace them. It can be particularly heart-breaking to see someone who has been with you from the start die because you weren’t more careful. Mordheim: City of the Damned is an excellent turn-based strategy game that makes you care greatly for your Warband, even if they are heartless killers. There was a moment when the leader of Hex on Legs (my Warband) was on his knees, completely at the mercy of the enemy. I sent my hero and three henchmen to his aid, but in the process I lost lives and took serious casualties. I was angry and tired, full of sickening rage and frustration, but at the centre of my soul, I was upset. I was sad that I’d never see him again and he would never be able to exact revenge on the ones that slayed him. Rest in peace, Thonius. You weren’t supposed to die that way.

Ignore the terrible loading times between missions and the odd framerate issue and you’ll find a game that has plenty to offer the most hardcore strategist. Mordheim: City of the Damned is an incredibly dense game that will punish you just as much as it will reward you – just remember to have fun in the process.

A brilliant strategy game that asks you to think carefully about every decision, pushing your tactical buttons in every conceivable way.

You may also like
Focus Home InteractiveMordheim: City of the DamnedPC