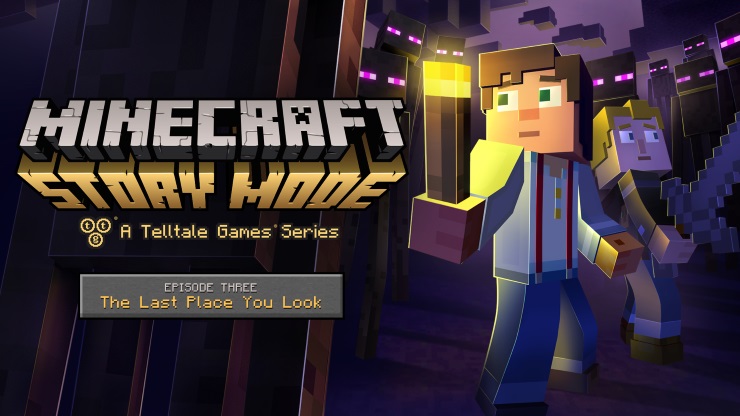 In the previous episode, Jesse and his/her friends had managed to locate two of the former Order of the Stone members: Eleegaard, the Redstone Engineer, and Magnus, the Griefer. During that episode it became apparent that at least of half of the fabled team that defeated the Ender Dragon and “saved the world” were insufferable, egotistical idiots. Thankfully our friends lost them towards the end of episode two, which ended on a fairly feeble cliffhanger. Episode three begins with them trapped in a room with no discernible way out, however get out they must if they are to find Soren and his super TNT bomb to defeat the Wither Storm unleashed way back in episode one.

So far I have been fairly underwhelmed with Minecraft: Story Mode. The characters are not as interesting as some of those from other Telltale Games series, and it has been a little light on laughs, which is likely a reflection of the intended audience and perhaps unfair of me to criticise too heavily. Having said that, this episode does more work in character progression and heightens the laughs a little more. Of particular note is a recurring image of Axel landing on Lukas, which is shown enough times to be funny without overdoing it. The action is ramped up a lot more in episode three, with the opening title sequence being perhaps the most thrilling section of the entire game so far. What features here is an extended chain of QTE events and decision making which propel the team through a huge redstone-powered grinder. It is perilous for our friends and as such is an exciting start to the episode. Again, perhaps indicative of the intended audience, there doesn’t seem to be a fail state if any of the button prompts are missed, making the entire scene only appear dangerous on the surface, however I am sure young players will not even notice and be more than thrilled with the events.

In terms of narrative, the stakes are increased a lot more as well, as emotional character connections are progressed; in particular Lukas’ growing dis-engagement from the rest of the group and the rapidly advancing wither sickness on a character whose identity is down to a decision made in the very first episode. There is even a touching moment towards the end of the episode that very young players may need to be guided through. As with the previous episodes, the attention to the details of the Minecraft world is excellent. There is a trip to The End, where Soren, the Master Builder, has built a beautiful paradise world made of wool, and a testing laboratory for studying the most compelling and frightening enemy from Minecraft – Endermen. It’s in Soren’s laboratory where I chuckled the most; in a wonderful nod to background storytelling through the use of recordings found in game worlds, we learn a little bit about Soren before meeting him in person. This is achieved through placing four music discs into a jukebox. The recordings paint Soren as an amusing, scatter-brained character and it’s the funniest writing so far across all the episodes. Thankfully, Soren is not as intolerable as the other two Order of the Stone members. The escape from Soren’s lab is another lovingly detailed and wonderfully observed acknowledgement of the source material. Surrounded by Endermen, our intrepid team must avert their gaze and work their way out.

The ending of The Last Place You Look is the most compelling so far. It’s fairly predictable, but after the stagnancy of the previous episodes it’s refreshing to have our friends actually try to achieve something, and it’s clear that Jesse’s dream of being “somebody” rather than a “nobody” is getting closer and closer.

This is the strongest entry to date in Minecraft: Story Mode. It still isn’t hitting the heights of some of Telltale Games’ best work, but this episode makes good strides in that direction. It has a lot more action than the previous two, and the narrative is tighter, with greater focus on character development and progression. I’m interested to see how the next episode plays out, and going on the release schedule for the first three episodes, hopefully we won’t have to wait too long.

More action packed than the previous episodes, with better character development and progression, The Last Place you Look is the best episode yet.