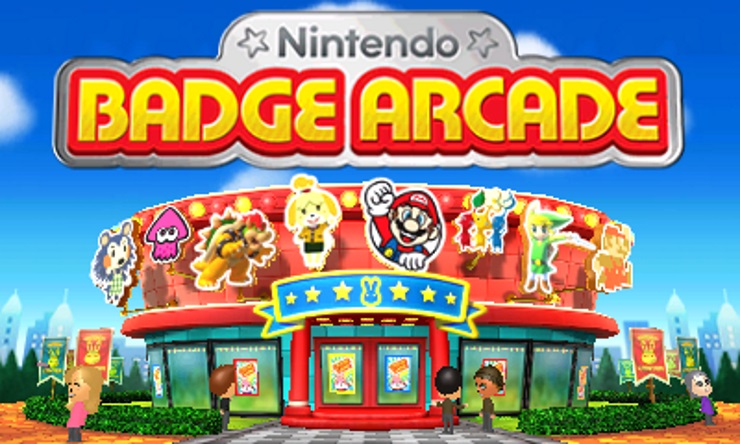 This is not really a game. Let’s just get that out of the way.

Put plainly, Nintendo Badge Arcade is a glorified theme/icon store for your Nintendo 3DS system, only it’s sort of not, because you’ll mostly be playing for the chance to possible win some customisation options for your Home screen. I’m about to explain how it works, and it’s going to make Badge Arcade sound really, really evil – but it isn’t quite that evil. Maybe. So, the first time you load up that colourful, inviting bunny icon that you’ve downloaded from the Nintendo eShop (for free, I might add, so you may see where this is going), you are greeted with that same bunny – a charming, funny fellow who is, for want of a better word, Badge Arcade’s pusher. He works at the Arcade, loves his job and loves talking to you. He’s friendly, but you always have to remember that this personable character is there to talk you into spending “real, real money” (as he refers to it).

You’re given five free plays of the Arcade’s many claw grabber machines, with each one containing various icons that you can grab and then use to make your Home menu as pretty as you like. At the time of writing, there are themed items based on Animal Crossing, Super Mario Bros. sprite art and hand drawn Mario offerings – but expect more, such as the Legend of Zelda stickers available for some time in the Japanese Badge Arcade. Each machine contains one of these themed sets, and some offer a traditional claw mechanic, while some require you to hit the icons out of the play area using a hammer, among other amendments to the typical machines.

Once you’ve used up those five free plays (which will take a minute or so), you collect your items and that’s it. Hopefully, you managed to grab some icons, because you aren’t always guaranteed anything (but the games are easy enough that you really shouldn’t be coming out empty-handed after 5 plays). Then, Mr. Pusher Bunny (that’s not his official name) explains that it’s 90p for another five turns. And so it begins… Here’s the thing about Badge Arcade. If you’re patient enough, there’s a chance to win a free play by playing a Practice machine that’s available once a day – but you won’t always get a free play token. With this method, you don’t actually need to spend any money to get something, provided you’re willing to wait. It’s akin to real life gambling, in which you should really only spend out what you can afford to lose, and Badge Arcade is no exception. You can easily earn multiple items on one play, but just as easily come out with nothing.

As for the gameplay itself, it’s as barebones as it comes. Just hold “A” to move the crane, and let go of the button when you want to grab. Full disclosure: Nintendo provided me with 60 plays, in addition to the starting 5. I had used the lot in about 15 minutes, which pretty much tells you how quick and easy it is to spend money, if you are so inclined. And when I wasn’t spending my own money, it was certainly addictive. Nintendo have done an excellent job in being absolutely honest about what this “game” is, and what you’re paying for. And when you’re actually paying, at 90p for five plays, I imagine it’s going to be incredibly easy to spend a fair bit of money if you aren’t careful. Thankfully, thanks to Nintendo’s cumbersome eShop implementation, it’s not easy to accidently pay money, and it does explain the spending of real money in a very clear way.

Even with the slightly pushy nature of Badge Arcade’s bunny character, and the ever-present nudging for you to spend some actual money, this game isn’t inherently evil. It’s a rather transparent and honest take on free-to-play monitisation, and as long as you’re sensible enough to either abstain from paying any money, or to set yourself a budget, then there’s a little bit of fun here for you. There’s just not much to it, save for the “gotta catch them all” aspect of collecting the various badges and themes available, which is possibly what might start the addiction for some players.

Clear explanations of what you’re buying into.
An entertaining alternative to buying themes.
You don’t have to pay a thing, if you’re patient.

Very easy to spend a lot of money in a short time.
You aren’t guaranteed an item, every time.
Badge Arcade Bunny is rather pushy.

It’s a rather transparent and honest take on free-to-play monitisation, and as long as you’re sensible enough to either abstain from paying any money, or to set yourself a budget, then there’s a little bit of fun here for you.