previous
Physical copies of Shaq Fu: A Legend Reborn have the secret game Barack Fu: The Adventures of Dirty Barry included
random
next
Myst III and Myst IV return exclusively on GOG.com and you can get the full saga discounted right now
0 comments 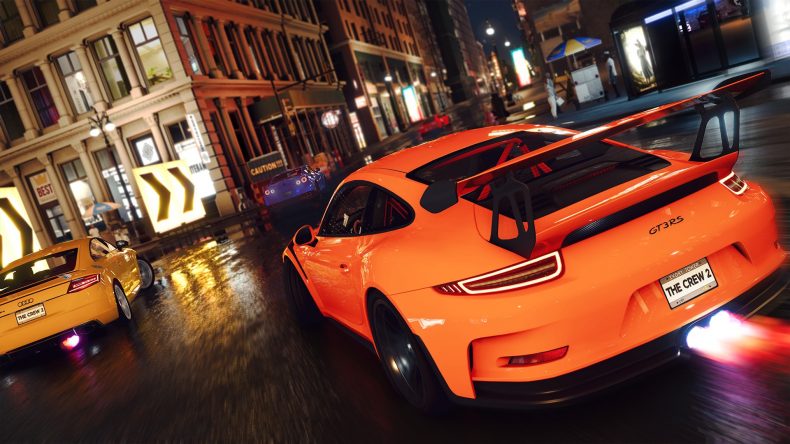 The Crew 2 releases for everyone today and since it is a follow up to The Crew that saw multiple editions, loads of post launch content, and more, many people have been wondering about various things with the game. If you’ve not played The Crew and want to know why this might be worth checking out or just want to know what’s gonna be available now and down the line for the game, this is the post for you. Here’s everything you need to know about The Crew 2 with your questions answered by Gary and Mikhail. What platforms is it releasing on?

The Crew 2 is releasing on PlayStation 4, Xbox One, and PC platforms. It is available physically and digitally on both consoles with PS4 Pro and Xbox One X support. The PC release is available via uPlay and Steam.

As with any big Ubisoft game, there are multiple editions. The standard edition is obviously there, but there is also a Deluxe Edition that includes the following: The Gold Edition contains the deluxe content, plus the Season Pass that includes 3 exclusive vehicles; early access to 22 new vehicles; 1 exclusive house & 2 outfits; VIP 20% discount in store and “much more.”

What’s been added over the first game?

Despite being set in the same US map as before, a few new areas have been added to account for the addition of boats and planes in The Crew 2. Alongside these new vehicle types, you can switch between your favourite vehicle of each type on-the-fly; even if you’re mid flight, you can swap to a boat or car and drop down to the road or water. Do you need to have played The Crew before?

No. This has nothing to do with the original game. It doesn’t follow on from the same story or require any prior knowledge whatsoever.

The Crew 2 is 25GB on PC while the console versions are 30GB and 24GB for PS4 and Xbox One respectively. You can play all the main events and explore the map to your heart’s content, all without a subscription. But to see and interact with other players even in free roam, you’ll need to be a paying member of Xbox Live or Playstation Plus.

What can I expect for the PC version?

The PC version has the following enhancements over the console version: What are the system requirements to play The Crew 2 at various settings on PC?

MINIMUM CONFIGURATION for 30 FPS at Low:

RECOMMENDED CONFIGURATION for 30 FPS at High:

If you’d like our final thoughts, read our review here.