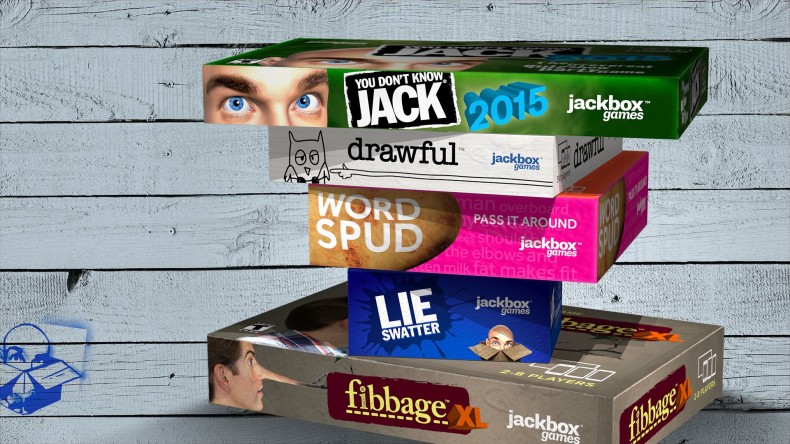 Forget your Mario Karts, Guitar Heroes and the like: The Jackbox Party Pack is how you make a party game. Containing five games in one, with a player range from one to a hundred, all Jackbox requires is that you grab an internet enabled device, go to jackbox.tv and enter a four-letter room code. It’s simple, effective and brilliant, but the best bit is the personality that Jackbox delivers in spades.

The headline article is trivia game You Don’t Know Jack.. Up to four players compete in a buzz-in style game show, where answering quickly increases both the risk and reward. The delight is how questions are framed: a straightforward answer hidden behind a layer of misdirection. For example: “If another remake of The Odd Couple used the superlative adjective, it would be called The ___ Couple”.

You Don’t Know Jack is slick as anything. Questions are tied together with little scenes showing the number you’re up to, while host Cookie Masterson delivers jokes and mocks your failures throughout. There’s even the occasional twist round, such as the one delivered by Cookie’s lisping ventriloquist dummy, that will both make you laugh and increase the difficulty. You won’t run out of questions quickly either, with 50 different sets to play through, each with their own bonus wrong answer – find the answer relating to deflated balloons, for example, and you’ll score major points. There’s also an option to “screw” another player once per game, forcing them to pick an answer within five seconds, giving you a reward if they get it wrong.

Next up is bluffing title Fibbage XL. For two to eight players, this gives you a statement with a blank space and has every player enter a convincing lie, before making you pick from each other’s bluffs and the right answer. Points are awarded for convincing others to pick your answer as well as for getting it right yourself. Excellent fun, it’s also quite frantic trying to come up with a convincing lie in a short space of time, and when you’re playing with seven others spotting the truth gets incredibly hard.

Cross Fibbage with Charades and you end up with the third game, Drawful. Each player is told to draw an image of something, which is then shown to the other players, who in turn make up a convincing lie about what it could be. All of you then have to guess the correct answer, with points both for guessing correctly and for fooling others. Naturally this – as well as Fibbage before it – can get filthy, depending on the mindset of the people you’re playing with (last Friday’s game with the God is a Geek team certainly opened my eyes).

There’s a third lying game, Lie Swatter, which can be played with up to 100 people. Here you’re given a set of statements – written on cartoon flies – to which you answer either true or false, with the fastest correct answer getting bonus points. With only a few players it can get a little dull, but when there are more than ten of you it really comes to life.

Word Spud is the final, and weakest, game. A form of word association, it gives you a word to start off with and sees you chaining together answers, with other players awarding points based on how good they thought it was. While fun in theory, the other players have no reason to up-vote your word, as unlike the other games they don’t get points themselves for doing so, and relying on good sportsmanship after playing the more competitive games doesn’t really work.

Not that this mars the experience, though. While Guitar Hero, Mario Party and Mario Kart are easy enough to pick up, gamers always have an advantage, but The Jackbox Party Pack is a party game that truly can be played by anyone. Its excellent presentation combined with its variety means that this is a must have for anyone who regularly has friends over.

Almost endless playability.
Great presentation.
Can be played by anyone.

Word Spud is a little weak.

A great variety of games in a slick package, this is the ultimate party game.

You may also like
Jackbox GamesThe Jackbox Party PackPC