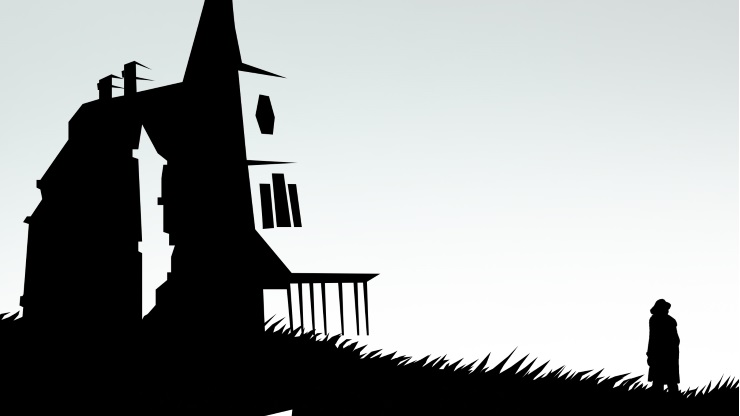 You’re driving along a dark road, headlights are the only tool available to cut away at the blackness ahead. You weave back and forth between the lines in the centre of the road, when a phantom-like figure materializes ahead. You brake and swerve, colliding with a tree – and you black out. When you wake, you find yourself in front of an ominously abandoned mansion. Do you go in? Of course you bloody go in.

White Night is entirely built around its 1930s noir-era setting and draws all of it’s unshakable horror directly from the black and white art-style. A narrative-driven game, this third-person adventure leaves you trapped in an abandoned mansion as you try to figure out the history of the inhabitants and the glowing ghostly figure named Selena that guides you. Cinematic and entrancing thanks to the haunting sound design, White Night succeeds at giving a new angle to the survival horror genre, while keeping players intrigued in the manor’s twisted past.

But it’s not just for show, the aesthetic actually effects how the game is played. Matches can be used to cut through the darkness of the house, creating a small sanctuary of light – a halo, if you will – that sears through the blackness to illuminate clues and paths. Exploring the dated rooms by match light is terrifying, unknowingly wandering from library to kitchen with no map to aid you. The contrast of the minuscule light of the match with the overwhelming weight of the darkness that surrounds you is chilling: there are no half-lights in the game, only black and white. Something is either seen, or unseen. Matches do eventually wither out, and panic ensues, making you find another one before claustrophobia sets it. An interesting mechanic prevents the player from trying to move while lighting a match, otherwise it dies instantly and leaves you in darkness – a situation you don’t want to be in when there’s screaming ghosts roaming the halls. Sights and clues are recorded in the your journal (titled Boston Daily News), which lays out events in chronological order so that even if you stop playing for a while, you can come back and remind yourself of what’s already happened. Fragments of diary entries from inhabitants of the house rehash the details of a love affair, newspaper articles in various locations tell the tale of a serial killer, and portraits on the wall glare damningly upon the player. There’s plenty of plot to be discovered outside of the story path which all adds to the foreboding atmosphere of the game.

The game employs a Resident Evil style camera, using set angles depending on where you are positioned. This succeeds in creating a sense of claustrophobia, especially when trying to escape from ghosts. The framing is a bit hit or miss depending on which area you’re in, though, with the black and white contrast making it very difficult to see where you actually are. The foreboding sense only goes so far, too, since the ghosts are pretty easy to avoid and even easier to outmaneuver in a tight spot. They are destroyed by light (electric only, match light does nothing), so many of the puzzles involve plugging fuses back in to sockets and flipping switches to rid the path of these ghastly figures; something which can become a bit repetitive after a while. Although the ghosts are frightening to begin with, when you begin to learn how to get past them without a hitch, they become a lot less daunting. That said, they still left me scared enough to not go anywhere without a match.

The quality of the sound design and voice acting in White Night is exemplary, allowing for an engrossing experience, and one that does not feel disconnected in any way. The thunder claps, the hissing of igniting phosphorus, sounds of heels on the wooden floors – all perfected for a beautifully horrifying jaunt through a haunted mansion. A wonderful soundtrack complements the exploratory nature as well as the more grim, melancholy fragments of plot to keep the player moving forward. Some finicky mechanics are what let White Night down, as they start to defy all logic in order to carve out some obscure objective for the player. One puzzle requires a dagger to be stabbed into a painting, opening up a secret passageway. Sounds simple enough, but lighting a match and trying to stab the painting doesn’t work – I’m told I need two hands to do this act. This forces me on a thirty minute long escapade through the darkened rooms, flipping switches and plugging in sockets only to turn on a single lamp next to the painting so that I can stab it without using a match. It’s annoying, and it detracts from the flow, generally making no bloody sense whatsoever.

Despite itself at times, White Night is a haunting adventure through an estate’s twisted history made unique and terrifying by the noir setting, the art style, and impeccable sound design. A fresh take on the survival horror genre, White Night is a cult-classic in the making.

Enemies are too simple to bypass.
Puzzles can become repetitive.

A noir art style, terrifying atmosphere, and an enjoyable narrative lead White Night towards
success only marred by a few irritating mechanics here and there.