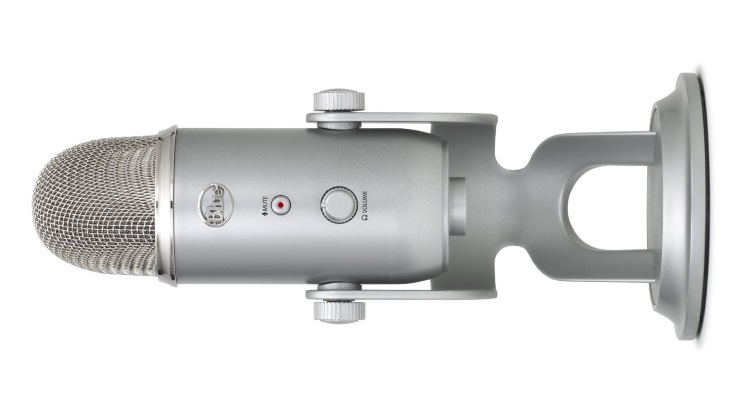 If you’ve enjoyed any of the videos that we host on our YouTube Channel, the chances are that you have heard a Blue product in action. I’m a fond fan of the Blue Snowball, a reasonably priced mic that absolutely does the job, and is plug and play to such an extent that anyone, with very little audio knowledge, can get recording.

The Blue Yeti is the big brother of the Snowball in every way.

Most obviously, it’s larger, heavier, and looks the part. Almost an old-timey studio mic in style, the Yeti is more adjustable, and thus of use in more circumstances than the Snowball. But it’s also a serious bit of kit, and will need tweaking to get desired results.

This is (for the most part) thanks to the fact it has multiple methods of picking up sound. There’s so many uses of the thing that you just won’t get with a more standard, basic setup. With the Yeti you can plonk it on a table and have four people sat around it, all having their audio recorded (using the Omni-directional setting) as though they were facing it. Thanks to a sensitivity knob, you can adjust things even further. Of course it’s not a replacement for having four individual mics set up, but it’s a godsend if you don’t have the budget, time, or space to do that. Elsewhere, you can also make use of the the Bi-Directional modes (two-man recording), Cardioid (one-person recordings), and Stereo.

I won’t bore you too much with how it sounds, because hearing it in action is better than me waffling on, so here’s some examples of the Blue Yeti, in both spoken word, and some acoustic guitar recordings, too. One thing I would note, however, is that whereas my Snowball really does need a popscreen to shield from harsh pops, the Yeti seemed to cope admirably without one. Of course, if you get right up in front of the mic and start shouting words with “p” sounds, it’s going to affect things, but generally, it really does do well solo.

If you’ve already got a Blue Yeti, though, the idea behind the Studio model is that it comes with bundle software. With custom templates for podcasting (among others), Blue are suggesting that this box contains everything you need to get started. And while the simplicity and price (free) of Audacity will always be a draw, there are many things it can’t do, especially if you’re going to get into music recording and mixing. Podcast production is where it’ll help you, as it has multiple presets that not only help improve the audio, but also can produce smaller files, designed for podcasts, whereas Audacity is a little simpler.

I’m still not convinced that the Blue Yeti (Studio model or otherwise) is ideal for field recordings, as Blue advertise on the box, but when it comes to home recording, I’ve found none finer. The stand itself is flexible, yet can be secured tightly in place for sensitive acoustic picking, and it’s mountable on a mic stand too, though bare in mind it’s very heavy, so you’ll need a strong tightening arm on that stand.

The Blue Yeti Studio is brilliant, and really does come with everything in the box that you’ll need to get you up and running. While the price may put some off, I don’t see a point in the future where I’ll need any other piece of gear for home recording, whether that’s singer/songwriting, or just recording a podcast or some voiceover for a video. I’ve long wondered just what the Yeti does to justify it being so much pricier than the snowball, and now I know: it’s simply fantastic.