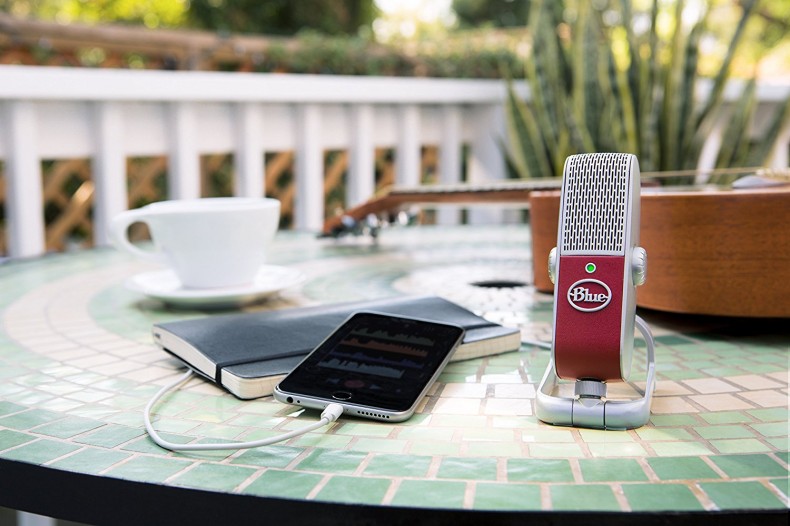 I swear by my Blue Yeti. I use it for everything you hear or see (audio-wise) on GodisaGeek. In fact, so beloved are they, that other members of the team use them as well. The customisation aspects and high quality, combined with the ease of “plugging a USB cable in” means they are probably one of the most used non-XLR mics out there.

But if there’s one complaint, it’s regarding the portability, or general size and weight of the Yeti. It’s monstrously heavy compared to almost every other option, and as such means if you’re travelling, you wouldn’t want it in your carry-on, or rucksack, because it’s so bloody heavy.

With the Raspberry, then, Blue are looking to address these complains, while attempting to keep the quality high. Fantastically, this has pretty much been achieved, at a high price, as the Raspberry costs nearly twice as much (not quite, though) as the Yeti. First up, it’s worth noting that, despite the decent sized box, the Raspberry is tiny. When unboxed, it fits snugly into a portable felt bag, and the cables will even fit in as well. Like the Yeti it comes with its own stand which you pull away from the mic. Again, portability is key and it folds back into place when unused. It’s also removable (again, like the Yeti) meaning it can be mounted with a camera/tripod setup that suits it accordingly.

A headphone slot on the back allows you to monitor audio levels, and it’s powered by USB cable, but also via a lightning cable directly from an iPhone or iPad – it comes with a MicroUSB to Lightning, and a MicroUSB to USB. On the left side is the headphone volume dial, and the right side hosts the gain of the mic – again, it’s a dial. The one black mark that stands out above all others is the decision to yet again make the mic mute button a clickable one that is, itself, attached to the microphone. Like the Yeti, with it’s massive clicky mute button on the front, the Raspberry is muted by clicking the gain button in. I can’t tell you how stupid this is, because you do not want a button you use regularly to be attached to a microphone. At best, you hear a massive click when you push it, at worst, due to the size of the Raspberry, you get all manner of fumbling and horrible noise. If you want to use this device seriously, get a cough button, or find a solution to muting it elsewhere, software, or hardware.

With the moaning out of the way, it’s good to be able to say the audio totally delivers. If you run your own YouTube channel, or are even semi-serious about audio for video work, you may well be familiar with a clapperboard. Sure, these days you can easily film with a SmartPhone (and you should, they’re very good and you already have one in your pocket), but audio can be another issue altogether. Syncing up separately recorded audio can be a nightmare, and if you use Premiere Pro, filming on an iPhone already means you’ve got to run footage through third-party software to get it to play nicely. While you’ll still have to do that with the video portion, using the Raspberry means the high quality audio is already hard-coded onto the video track, so it can actually cut out a part of the process.

For the less hardcore, it’s still a viable option because you get crystal clear audio on your home movies. It’s a win-win, though I would suggest that the price point makes this a portable solution for someone who is fairly into their video and audio editing. While it’s not omnidirectional like the Yeti, plugging the Raspberry into a laptop or Apple device and sit yourself and a friend either side, and you’ve got yourself a podcast. Nowadays, with free editing software like Audacity, there’s no reason you need to go nuts and build a studio, with the Raspberry and some free software, you’ve got your studio right there.

Something I wasn’t expecting, is how nicely such a small microphone can make an acoustic guitar sound. Bare in mind, the acoustic I was playing has very old strings, and isn’t in the best of conditions, but it’s made it sound very bright, in the clip below. If you listen clearly you can even hear a Tweetdeck notification, which tells you something about the sensitivity (and my idiocy in forgetting to mute everything while recording).

Overall, then, I’m hugely impressed with the Raspberry. It’s not going to replace anyone’s studio kit, but it might well replace your “on-the-go” setup. It’s so simple to use, and while it’s not cheap, what you get for your money in a small package is very good indeed.

There’s no question that the usage cases for the Raspberry are pretty specific, but right now, it is giving the Yeti a serious run for money on my desk, but because it’s so useful to record with an iPhone, this is the microphone I’ll be using in videos when I’m camera going forward. And if that isn’t a ringing endorsement, I don’t know what is.

It comes with a hefty price, sure, but the Blue Raspberry is a tiny microphone with superb audio quality that gives the enormous Yeti a run for its money.