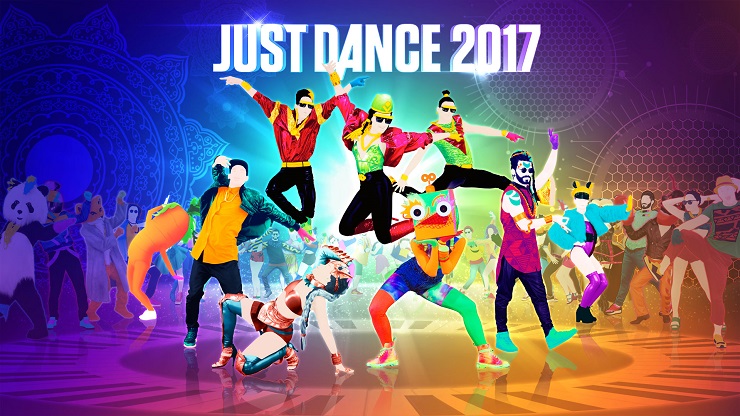 I’m not exactly blessed with a sense of rhythm, and it doesn’t help that I’m overweight and officially classed as middle-aged; I shy away from nightclubs and I don’t participate at parties unless I’m sufficiently inebriated. So, it was with great trepidation (and a glass of whisky) that I fired up Just Dance 2017 for review.

I’ve owned the PS4 version of this for a while now (one of my son’s Christmas presents) and I can say that the Switch version is aesthetically identical in every way. Every feature is here aside from the camera recording that uploads to Just Dance TV; this itself is a shame as the scrappily cut videos were always a source of unintended hilarity when you’re dripping sweat gasping for breath, but, other than that it’s the same experience as you’ll get on any other console, even to the point where if you’ve run out of Joy-Cons you can use the Just Dance app to tether your phone to it and use that as a controller.

As I’ve stated before, I’m not the best dancer, so it’s hard to tell if the game picks up my controller movements adequately enough, all things told though very few beats were missed, and my ratio of ‘Good’ to ‘Perfects’ was decent enough for me to pick up at least three stars on every track (with one five star rating, but we won’t go into that); so, it’s safe to say that how the game picks up Joy-Con movement in 3D space is good enough. All things told, despite how knackered it made me the game is pretty fun and it really brings out your competitive side when you realise your star rating is sliding under that of your seven-year-old son. The tracklist comes in at a respectable 40 songs, with a considerable range in quality – thankfully there’s no Drum ‘n’ Bass, Garage or Dubstep, but there’s plenty of cheesy pop for you to get your teeth into. You can gyrate to Shakira’s ‘Hips Don’t Lie’, go silly with PSY’s ‘Daddy’, slow it down with Maroon 5’s ‘Don’t Wanna Know’, Whip it to Silentó’s ‘Watch me’ or go completely mental with Miku’s ‘PoPiPo’ although why you’d want to take on this ludicrous challenge is beyond me, even if you do want to see some poor Miku cosplay in action.

There’s also another 200 songs through the game’s premium service Just Dance Unlimited, for which you’ll have to pay a subscription for. You’ll find costs ranging from £3.29 for 24hrs up to £25 for a full year, and on your first use of the game you get 90 days of access to Unlimited for free, so you can try it out and see if it appeals to you before you start paying out. This sub-service is fair enough; I mean games like this and Singstar should be platforms rather than singular games, but it does highlight that 40 tracks for £42 (lower on other consoles) isn’t really good value. You can go down to HMV and buy Now That’s What I call Music for £12, get more songs and dance away to your heart’s content without anyone judging you. Also kept being this pay-wall are the game’s mashup feature which allows you to select songs to put together in a ‘mash-up’ just to give you more of a challenge and even more gutting is the gate-keeping of a selection of kids songs; it just feels unfair to keep that away from you unless you pay more money.

The game’s topped off with a mode for using the songs as a workout routine, which is good for people who like to use dance as a means of keeping fit. The amount I was sweating from regular dancing was bad enough for me, and I wasn’t brave enough to take this on lest I not be alive to write this review. Sorry, but sacrifices must be made somewhere.

If you’ve played Just Dance before you’ll know what to expect from the 2017 installment; a bunch of new songs to gyrate your body to and make yourself look like a fool at parties, now you can take it with you and create dance parties wherever you like – what could be better? The gate-keeping of features behind the Unlimited service sticks in the craw a bit, but what Ubisoft needs to do now is stop making Just Dance games and focus more on making Unlimited a value proposition for people to get behind. But otherwise this is an enjoyable, tiring time and the way my back feels right now can attest to that.

Probably the most definitive Just Dance game yet, but maybe it should be the last?