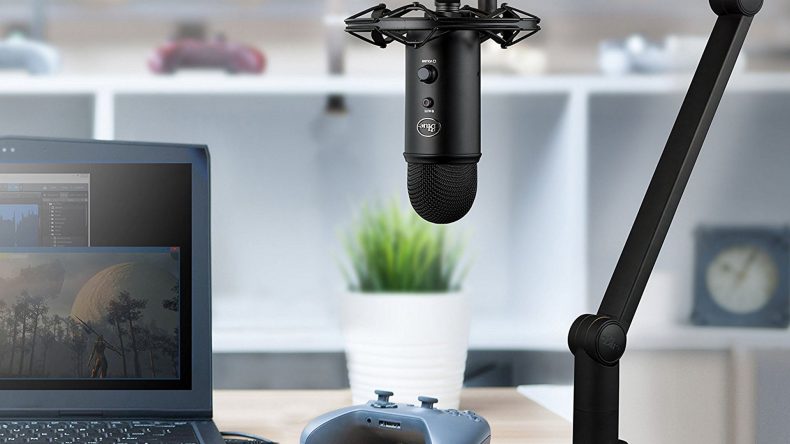 Every pro podcasting or YouTuber setup needs one, right? A desk mount, or mic-arm, or whatever you want to call them, they are popular because they’re useful, but there are a lot of cheap models on the market which look enticing, but when you get them into your setup, they can’t handle the weight of your high-end mic, or they are just rubbish plastic which falls apart the moment you unwrap it.

The Yeticaster is none of these things: it’s brilliant.

For starters, if you want to go from no setup to an excellent one, this is a good deal. One of the complaints I’ve had about the (almost industry standard at this point, given how many people use them) Blue Yeti mic included in this bundle is the weight of the thing. I’ve used an old fashioned mic stand which, sure, does work, but its cumbersome and takes up more space than it should. The Yeticaster tucks itself away and easily takes the weight. Even better, though, it accepts other mics and adjusts accordingly thanks to the springs inside the thing. So I use a Blue Blackout Spark SL Mic which is smaller and thanks to being XLR, rather than USB powered (I use a preamp, the Blue Icicle, which is cheap and cheerful but does the job) and avoids any USB power mic noise, but because of the way the Yeticaster works, it just simply adjusts to the weight of the mic. It does have a limit, but frankly, if you’re exceeding it given it comes bundled with the Blue Yeti, I don’t know what you’re doing.

The c-clamp fits to pretty much any surface and is small but sturdy. The arm then slots directly into a hole on the mount meaning you can put it away quickly if need be: there are no fiddly buttons to unlock it because it’s all based on the weight and design to keep it in place. Movement is stiff enough that you have some resistance when placing the arm, but this means you won’t accidentally get noise on your mic if you’re using a high-gain option and you bang the desk, making the arm move.

The included shockmount is designed for the Yeti, but it’s huge and will allow most mics to attach to it, but it does minimise shock and vibration, reducing noise you don’t want on a recording. It’s important to note, of course, this ultimately comes down to your setup. If you want to use the boom arm off-screen, you’re going to need a higher gain to pick you up clearly, which obviously increases the potential for noise being picked up – it’s a sensitivity issue, and one you’ll have to play around with to get the sweet spot.

One very minor issue with the package is that unlike a standalone Blue Yeti, you don’t get the desktop stand. Again, it’s a tiny complaint, and I had one anyway, but for a starter pack it’d be a nice inclusion, giving you options in your setup. That said, if you’re buying this box, you’re likely wanting to use it in the boom arm configuration, so it’s barely a gripe at all.

I’ve had no issues with the Yeticaster boom arm, and while you can read our Blue Yeti review separately, this is a terrific package to get you started. Getting the mic away from your desk and any potentially intrusive noises is a great way to improve your overall audio quality, and the boom arm included even has tiny little clips to allow you to run your cable inside the arm and lock them in place – they thought of everything. The only thing you’ll need, really, is a pop-filter to keep your plosives in check, but you could literally use a pair of tights to do this, so don’t be fooled into buying premium pop-filters.

This is a superb package that is priced well for those who are at least semi-serious about the audio they record. Whether it’s for vocal tracks for music, acoustic guitar, voiceover, or just chatting with people, this setup will get you on your way and keep your desk tidy while it does it. Excellent.

You can hear the Yeticaster in use on any of the podcasts from the last month. I’m the host of the pod, listen and hear the lovely audio quality!

No desktop stand for the Yeti

A superb package that is priced well for those who are at least semi-serious about the audio they record.