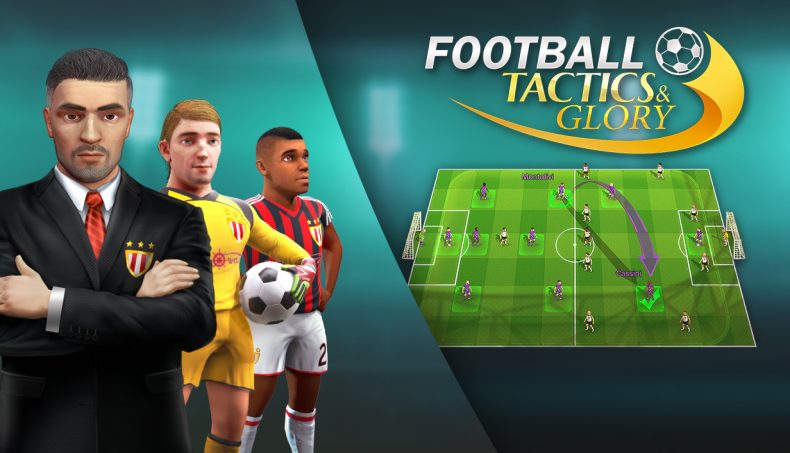 It can be weird previewing a game, and then reviewing it later on. In essence you’re the person who played the game to being with, so it makes sense to have the person carry on that work. It’s also really interesting seeing how a game evolves between builds and whether the tweaks made actually serve to improve things at all.

Essentially the tweaks to Football, Tactics and Glory all take place within the game’s UI. There’s now a proper title screen separating you from automatically clicking an icon and loading a game you didn’t mean to. Other than that there’s a slew of menu changes that will baffle anyone who as playing the game in early access but essentially serve to guide you from menu to menu while knowing exactly what lies where.

Football, Tactics and Glory is a football management sim with a difference. Your job as a manager of a newly created football team is to guide them to glory, nurture their talent and discard them when they’re no longer of use, it’s kind of like Pokémon, but the monsters and blokes aged between sixteen and forty. You’ll need to hire players who can perform, but nurture talent from within, juggling players skills and ages with their up and coming counterparts to create a team capable of winning things. Unlike other management games though, here you can take a hands on approach to proceedings. There’s a significant proportion of time spent in menus for one reason or another here, but aside from being a management sim here you can take direct control of the team in a strategy RPG vein. You and your opponent will take it in turns to execute three moves on the pitch, be it tackling, dribbling, shooting or just moving a player to a tactical location the idea being to draw out the defence for your players to have a shot. Your players will obviously be good at different things, such as strikers having good accuracy, midfielders need good passing and your defence needs to be good at, well, defending.

Ensuring you have he right players for your team is a delicate balancing act, and ensuring you have good veteran players and decent youngsters to improve becomes important very early on, as the old guard age and need to be replaced, contracts need to be renewed and the better the players are the more expensive it is to keep your team running; sponsors help with this. At the start of each season you get to choose from three sponsors with different requirements to earn money, having an idea of how good you are at controlling your players goes a long way to making sure you earn enough money to keep your best players in contract.

There’s an issue with the in-game action in where the AI has a much better idea of what to do than you ever will. Regularly you’ll position your strongest players in a way to get a tactical advantage only for your player to be tackled despite their ability to improve their control under pressure. Players also learn new abilities that allow them to make interceptions on passes and shots and the opposition players seem to learn these things a lot quicker than your players do. I got so frustrated with different tactical choices not paying off that I started simulating matches and found the game’s RNG did a lot better than I ever could, allowing me to play the game more like a management sim. In that aspect the game is great. It’s really stripped back from experiences like Football Manager, but as a result it feels better. One of Football Manager’s biggest hooks is the wheeling and dealing in the transfer market and managing to get in two decent players after selling one of your current squad is a really good feeling, but that’s about it. Fiddling about with your formations and ensuring you have adequate players to cover positions just never feels in need, as players suffer from tiredness as you’d expect, and while there is a reduction in stats it never actually seems to affect anything.

The addition of experience points into the mix is a little hard to get your head around, as players seem to age quicker than their stats improve, making it very difficult to build a team up. Just as a player is starting to get good their contracts are either out of your price range or they’re retiring, and the youngsters that your team brings through are never strong enough to put into your team for experience and don’t sell for nearly enough money to help you afford anyone or anything to improve your squad, which makes me question why they’re even included.

Looks wise the game is functional from a UI standpoint, if unspectacular, and the game engine looks great, even if the players all look like the love child of Wayne Rooney and Peter Beardsley, all massive chins and big teeth, it’s a little unsettling. And from a sound perspective, there is sound, and it’s serviceable, but you’re not going to be humming tunes and will most likely have a Spotify playlist on instead. Football, Tactics and Glory is a decent stab at bringing football and strategy gaming together, but it just needs a little bit of improvement in its balancing; slightly better player progression and a less steep inclination of financial recompense for players at such an early point. It’s certainly worth a go if you like football management or strategy games, because there’s no need for knowledge of either to get into this.

Football, Management and Tactics combines the best and worst parts of football management and strategy games, and that’s probably about it.