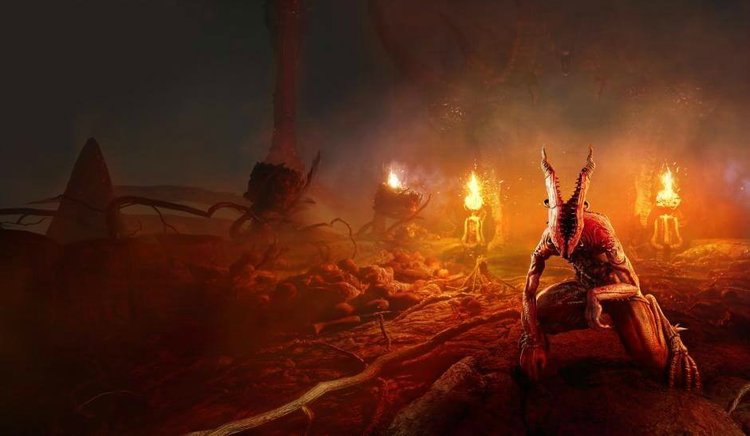 There is nothing more frustrating than looking forward to delving into a game that has shown great promise through its pre-release screenshots and trailers only to finally play it and find nothing but utter disappointment. Horrendous screen tearing, corrupt saves, and the occasional game crash ruins any excitement I had before diving in, and then there’s the issues with level design, save points, and visual infidelities. Even after three updates the game still suffers from bugs: put it this way, this review would have been up a lot sooner had it not been for the lingering issues. PC users haven’t mentioned many of the concerns I had on console, but regardless, its unforgivable.

Agony has so much promise. You’re a tormented soul trying to find someone known as the Red Goddess in the hopes of escaping literal hell. Blood, guts, and some of the most despicable things seen in gaming litter the world, with demons and succubus ripping other wretches from limb to limb, viscera dripping down their naked bodies and torturing anyone within distance. There are some truly disturbing scenes, but as you play the game desensitisation will kick in and it’ll all become a familiar sight, highlighting the frustrations rather than allowing you to squirm at an environment unfolding in front of you. Agony is a survival FPS, then, but Outlast it is not. The demons hunt you much like the Xenomorph in Alien: Isolation, but the main problem is the sound design masking its approach, and the darkness of the visuals giving you no indication of when it’s near. You’ll hear a screech here and there, but before you know it, it’s ripping your body to pieces. Your best chance is spotting it in front of you, but even then, the nooks and crannies you can hide in are few and far between, and the option to hold your breath doesn’t seem to work at all.

There are a lot of puzzles you’ll need to solve, such as finding symbols to then draw on lockable doorways or finding skulls and other items to unlock the next section, but with these gruesome enemies lurking everywhere you’ll often die and must replay it all over again. There are checkpoints, but their spacing is completely off. Some will be relatively close together whilst others remain too far apart. Within the limits of these sections you’ll often find a few tricky obstacles to overcome, meaning you’ll be replaying them repeatedly. I even found myself teleported back to a checkpoint two or three before the current one I had unlocked.

To avoid dying and heading back to these checkpoints, Agony gives you a lifeline. When you get attacked your soul leaves your body and you have a finite amount of time to find another host – mainly being another one of the weak and tormented bodies in hell. The tunnels, obstacles, and dim lighting often means it’s rather difficult to find a host and you’ll likely end up dying, again reverting to a distant checkpoint. Later, you can try using one of the demons, but trying to capture their bodies is a pain in the arse, leaving you to die just as you’re about to take them over. As mentioned, I had numerous crashes that sent me to the home screen of my PS4, suffered terrible screen tearing whenever I ran or when a lot was happening on screen, and I had a save file corrupt early on. Also, when I attempted to close the game down it took more than two minutes before another crash happened. I can’t quite understand how it got to this point and was given the green light for release, but that’s just where we are these days, sadly. It’s such a shame because there is potential here. There’s the fear of not having any combat options, and the feeling of vulnerability whilst exploring does cause a cold sweat here and there, but Agony never gives you proper guidance. The artwork is interesting, but the level design, check points and constant bugs hinder any shred of enjoyment you might feel pop up from time to time.

As its name suggests, playing this at times is painful, void of fun, and a chore that could've been avoided had a lot more care been put into it.