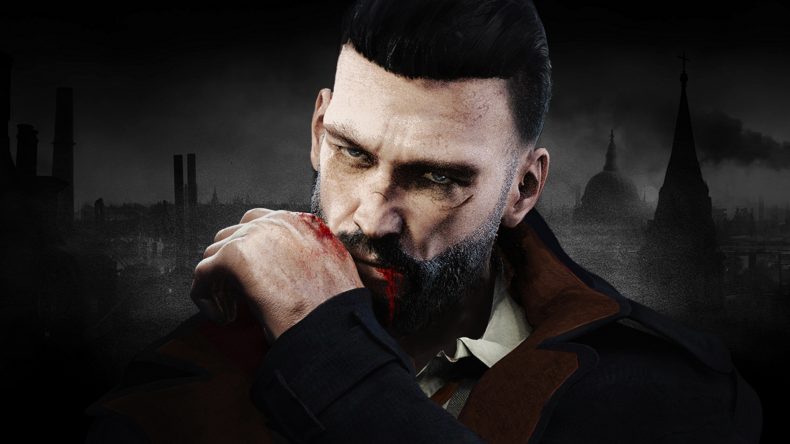 I was six hours into Vampyr before I made my first “significant” kill, and I was still seeing the ramifications several hours later. I told myself when I started that I wouldn’t kill civilians, and that the sixty-odd named NPCs in DONTNOD’s London would be safe from my macabre appetites.

Initially, I thought that might be doable. There are enough enemies (human and otherwise) to drink from mid-combat, and rats to chow down on when it’s quiet and you need a hit of blood, but this in itself highlights my biggest problem with Vampyr – and it’s such a huge, glaring problem that I’m going to leave it hanging there while I bring you up to speed.

The year is 1918 and London is in the grip of a Spanish Flu epidemic. You play Dr. Jonathan Reid, a pioneering physician and one of the world’s foremost authorities on the new science of blood transfusions. You’re also a “newborn” vampire, bitten, fed, and turned by a mysterious, unknown maker. Your first act is one of unconscious murder, as you instinctively take the life of someone close to you. This kill is unavoidable, but necessary to massage the story toward certain beats. And a solid story it is. Well-written and well acted, Vampyr is a tale of personal struggle, of taking responsibility for one’s actions, and, at the most basic of levels, the battle of good versus evil within the human soul. Reid is a likeable character, the extensive dialogue options allowing you to make him compassionate, ruthless, sarcastic, or righteous depending on your mood. Vampyr doesn’t label your responses so crudely, by the way, that was me, but there’s a definite selection of personalities at play, all of which you’ll need to navigate both the nighttime streets of London and the halls of Pembroke Hospital, where you’ve recently accepted employment at the behest of Dr. Edward Swansea, who just happens to be not only aware of the existence of vampires, but also something of a fan. So much so that he has declared his hospital neutral ground in the war between vampires and the Guard of Priwen, an organisation determined to wipe them out.

Gameplay is divided between exploring the districts of London and indulging in 3rd person melee/magic combat, and solving investigations connected to the aforementioned NPCs. For example, I met a young man in Pembroke Hospital who was afflicted with such a rare condition that two of the institute’s top minds were engaged in a battle over how to treat him. Vampyr squarely and firmly put his fate in my hands, as Reid was called upon to mediate – though one was somewhat opposed to his involvement. Regardless, the choices here felt weighty and important, even though it was essentially a side quest. Everyone you meet and speak to has a social circle, from the nurse who moonlights in an illegal clinic to the apparent madwoman who believes she’s a vampire, or the struggling poet who seeks inspiration on the perilous streets of Whitechapel after dark. Usually my temptation is to skip conversations, but in Vampyr they’re essential – by talking and listening you’ll unlock new hints about either the person you’re chatting to or someone in their circle, and helping people through their various personal crises adds to the wellbeing of a given district. Ultimately, the only way to achieve the true ending is by not losing districts to the darkness, but by saving them instead.

To DONTNOD’s credit, most of these side investigations are thoroughly enjoyable, the characters and their secrets compelling and fun – and they have to be, because the devs really want you to feel guilty for taking lives. Everyone has a “Mesmerise level”, denoted by a little number in the top corner of the conversation screen. If Reid’s is currently higher than his target, you can hypnotise them, lead them to a dark corner somewhere and “embrace” them, which means drain them of blood. Sadly you can’t leave a trail of new vampires in your wake, only bodies, but each one will have a lasting effect on the game. Attitudes towards Reid will slowly shift, while districts will slowly but surely go to shit. So why bother killing at all?

Well, here’s the thing: Reid has a lot of abilities, 18 branching skill trees across 8 different categories. These abilities are all cool, too, in a Dishonored kind of way – only Reid uses blood where Corvo used shadows. You can, among other things, craft and hurl a spear made of blood, drop an exploding cloud of blood at an enemy’s feet, or teleport, Blink-style, at will. There are also passive buffs to health, stamina, and blood capacity to be unlocked and improved. Vampyr will often lead you directly into conflict with enemies several levels above you, rendering skills and buffs essential. Besides combat and completing investigations, the best way to earn XP (and the only way to earn it in significant quantities) is to feed on people. You can improve this XP boost by first, rather cruelly, diagnosing their various medical conditions and treating them. The healthier they are, the better the boost.

The big problem I mentioned in the opener? None of this makes sense in the scheme of things. Reid agonises over kills, debates morality and mortality with his vampire “mentor”, the enigmatic Lady Ashbury, and hates himself for breaking the hypocratic oath, yet really your decision to kill isn’t motivated by your desire to serve a grander narrative, but by your need to make the game a little easier. It will affect certain social circles and bring the district down, reducing your chance of achieving the true ending, yes, but it always feels like just something you do to get stronger – though you’ll probably be accosted by a new boss next time you go for a stroll. It’s a very gamey mechanic masquerading as something more.

There’s also the fact you’ll feed on literally scores of humans (and non-humans) during combat, for no xp boost at all. And because these are vampire hunters (despite that being a good thing in the grand scheme of things) Reid butchers them without batting an eye. It’s a painfully transparent conceit, particularly as the blood you drain in combat is used as currency for special skills and spells not to get tougher. The combat is perhaps its weakest element. Certain skills are overpowered to the point that you’ll use them exclusively while you have blood, then stun, bite, repeat. Irritatingly, Reid is a powerful creature of the night with a pathetic stamina reserve that’ll need upgrading quickly. Three or four swings or evades will leave you panting and vulnerable to attack, and it feels like something that crept in from another game.

Between investigations and missions you’ll find hideouts where you can craft weapon upgrades, serums (curatives), and medical treatments, restock your ammo and, most importantly, sleep out the day. Doing this allows you to spend XP and logs the events of the previous night, adjusting the status of districts, social circles, and merchants accordingly.

The atmosphere, as you’d expect, is an important aspect and treated as such. You’ll operate exclusively at night, and the shadows seethe with malicious intent. It’s a shame though, that despite the unsettling sound effects and macabre surroundings, that sense of pervading menace is wasted on signposted fights with men with flamethrowers and shambling vampire “skals”. Later, there are priests whose holy cross will blind and stun you, werewolf-like beasts and advanced, more deadly vampires, but the combat always feels intrusive. Graphically, it’s decent looking. Character models are well drawn, but the lip-syncing is slightly out, and enemies are identikit, hamstringing the immersion. It’s no deal breaker, but it’s noticeable. Likewise is the fact that Reid’s weaponry is invisible until you hit attack, whereupon he pulls clubs, hatches and two-handed mallets from thin air. In so many ways it feels as though combat was a complete afterthought to inject some excitement into the game. Enemies have a rudimentary damage table, where some are more vulnerable to certain attacks such as melee, ranged, blood, and shadow, but regular difficulty spikes and the ability to make Reid a god by improving just a core selection of skills highlight the lack of depth from the company who created Remember Me‘s incredible Combo Lab.

Freedom of choice is a concept dangled in front of gamers an awful lot, and on the whole Vampyr delivers. Your choices are worth taking your time over, even though if the payoff isn’t as Earth-shaking as you’d like. It’s also easy to empathise with Reid’s disdain for murder, making him a relatable character despite his condition. That being said, so many gameplay elements are at odds with the core systems I couldn’t help thinking that DONTNOD struggled to commit to a particular path themselves.

What I will say about this game is that at no point did I feel bored. The combat is a little by-the-numbers and there are times when being the good guy is more effort than it’s worth, but DONTNOD has put demonstrable effort into the NPCs and their backstories, and the overall tale of Dr. Reid and his war against himself is well told. Sadly, though, Vampyr is just too determined to remind you that it’s a game, and the result is a compelling but uneven experience.