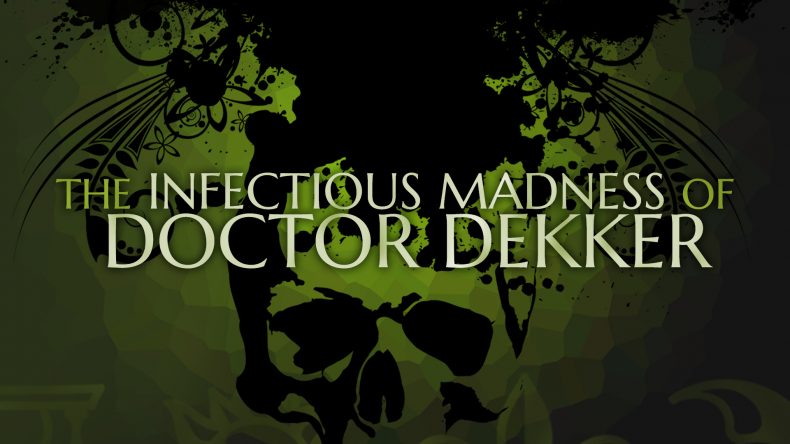 Her Story set boundaries for FMV games, leading others to try and capitalise on its success, with few managing to do so. It was ambitious, smart, and felt natural when asking questions, and those kind of games are few and far between, but The Infectious Mind of Doctor Dekker is a great step in the right direction. Whilst there is a lot of information to soak up, the atmosphere it creates and the characters you interact with make it a treat to play. It’s dark and most definitely Lovecraftian, even when that term is bandied around far too much by developers these days.

You play the role of a psychiatrist brought in to find out just why the previous Doctor Dekker was murdered, talking to a bunch of troubled souls who all could’ve played a role in his demise. The introduction to the game is mostly hollow, and it isn’t until you play (or read the synopsis on the devs website) that you begin to understand what the game’s about. The beauty of it is that the culprit changes upon each playthrough, so the one that fesses up at the end of my game might not be the same in yours. The patients that grace the couch in front of you all have bizarre stories and beliefs, and the fantasy and spookiness of the story starts to become apparent early on. Through the five acts you’ll chat to various characters including a woman who blacks out and finds herself at the beach when waking up, a man who seems to relieve the same day over and over again after a tragic accident, and another who believes he gains an extra hour at the end of the day where the world freezes, allowing him to do whatever he pleases. The acting is better with certain people, but it’s still very am-dram, reminding me of the kind of plays you were dragged into at school assembly to watch some students teach you about the dangers of drugs or strangers.

It’s still engaging, and you’ll find yourself drawn into their lives and their stories, choosing to become a friend to them through certain responses, encourage their darker sides, or maintain your professionalism by actually trying to help them. As it progresses your findings becomes engaging, even if the story isn’t necessarily present. You’ll find out what happened to Dekker, but the journey is much more interesting. I found myself drawn into Marianna’s story because of her seductive tone, and the uneasy feeling of comfort I found when questioning her. Others may do this to you as well, so try not to trust too easily or else it could have strong consequences later on. In terms of the gameplay, you’re allowed to switch between the patients whenever you please, finding out more about them by asking questions presented to you at the top left of your screen. Some retorts are simple information grabs, whilst other times you can be caught off guard with a question of their own, leaving you vulnerable to showing off a bit of your own psyche. If you uncover something interesting you can make a note of it, or if a new response pops up an asterisk or two will show up, providing which question would be more beneficial to ask.

The notepad you’re given is key, allowing you to write anything of importance in it to be used at a later time. There is a pop up keyboard you can use to ask direct questions, but it’s better used for typing a couple of words rather than one question. More often than not, you spend ages typing in a question to have it rebuked by the patient telling you they don’t understand in a lot of different ways. It can become frustrating, and when you believe you’re close to uncovering vital information, constant typing can cut through the tension. Single words work better, but using the prompting questions first is a much better approach. The fluidity of moving between patients, asking questions, and moving between notebooks and the hint system is effortless, so you’re never waiting long for the game to flow. Speaking of the hint system, it helps a great deal if you’re stumped at any point, but there is a cooldown period so you can’t keep using it – something you should avoid anyway because it takes away the achievement of uncovering the mystery on your own.

The Infectious Madness of Doctor Dekker is a disturbing psychological horror that dips its toes into a whole manner of subjects, and the characters you talk to are interesting and disturbing in equal measures. You’ll have plenty of questions to ask and a lot of FMV sequences to watch, but rarely do you find yourself bored of doing so.

The characters are interesting, and the psychological threads draw out the plot leaving you just as vulnerable as the patients your interviewing.