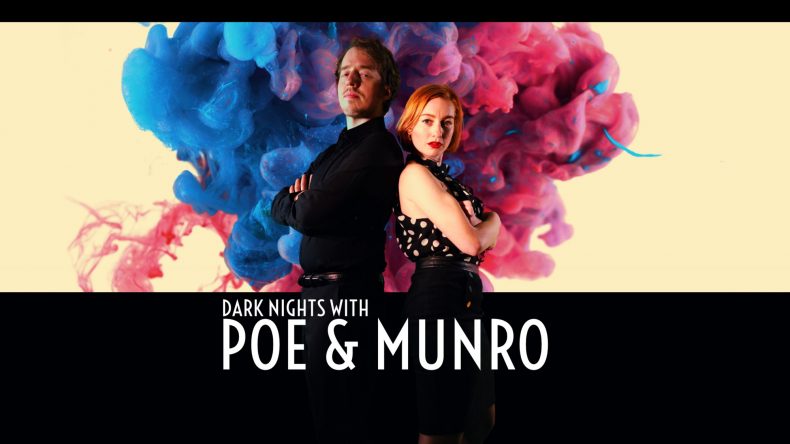 One of the highlights of D’Avekki Studios’ previous title The Shapeshifting Detective was the way in which it nailed its supernatural-noir setting. This was in part down to the authentic delivery of Radio August duo John “Poe” Pope and Ellis Munro as it played in the background of your eerie investigation. Now Poe and Munro take centre-stage in their own series of mini-adventures to try and recreate that same brand of atmosphere and chemistry that served them so well previously.

Dark Nights with Poe and Munro adopts a similar style to the Shapeshifting Detective, with the plot delivered through FMV sequences, and your choices affecting the plot, resulting in different endings. This time around, instead of a single story, the game is broken up into six, largely separate episodes, dealing with different weird and wonderful scenarios in the small town of August. The result is more of a short TV series, rather than a longer film-type experience, which has a mixed impact on the final product.

It’s a nice change to not simply being a “blank canvas” protagonist that you never actually “see” in an FMV game. Instead, you live out these episodes through Poe and Munro, and make choices for them, which enables much more consideration for your actions based on the personalities of those characters rather than just projecting yourself on a faceless hero. Thankfully this newfound relatability is sustained, as both Klemens Koehring as the intelligent and atmospheric Poe, and Leah Cunard as the alluring and personable Munro deliver decent performances. The chemistry of the pair is very believable with their characters having a depth that gives credence to the decision to revolve an entire game around them.

The standard of writing is decent, with the various conversations between Poe and Munro and supporting characters feeling reasonably believable. Their reactions to feel relatable, in spite of the weird situations the pair find themselves in. Sure it suffers from the same trait as most of the genre where the blind curiosity of the unknown often trumps common sense or logical thought. But, it works here thanks to the tone set by the duo themselves, and the mysterious goings-on providing suitable levels of intrigue to warrant further delving in to.

It also feels like a bit of a love letter to the D’Avekki Studios back catalogue with Aislinn De’Ath reprising her role as Violet, who players will remember from The Shapeshifting Detective. There’s even more than a subtle nod to the studio’s other FMV title The Infectious Madness of Doctor Dekker in one of the later episodes too. It’s clearly one for the fans, and that’s no bad thing, especially if you’re a fan of FMV and have enjoyed the darker style of those previous titles.

However, the decision to create smaller episodes, rather than one larger mystery will divide players. The six episodes largely have no bearing on each other, only occasionally referencing previous chapters in passing, but never in a way that affects the story. As such, they can often feel like short, sharp bursts of story that often fizzle out before they get going. Within twenty minutes, you’ll be reaching the end of most of them, and depending on your choices, sometimes without much of a satisfying conclusion. The only way to really know whether this is part of the intrigue or because you didn’t make the intended selections is to have another run through. But, as is always the way with such dark mystery titles, the atmosphere is always in the unknown. The lack of awareness of what is yet to come, or what could be causing things to happen the way they are is what makes things exciting. And there’s no denying that future playthroughs dampen that effect, and they really just become curiosity exercises to try and fill in the gaps.

There are some clever story ideas in here, often feeling almost Jonathan Creek like at times, in their supernatural beginnings, before the big, more realistic reveals later on. The problem is, because of the shorter timeframes, they feel under-explored as concepts, before you move onto the next weird and wonderful situation in the next episode. Three or four of the ideas could easily have been fleshed out as full game themes that a much broader, more intricate narrative and mystery could have been built around. Here, however they fall a little hollow and feel very quickly executed.

There is undoubtedly a lot of character and personality in Dark Nights with Poe and Munro. The chemistry of the main pair is excellent, the FMV well shot, and the ideas, if anything, are too good for the chosen format. As such, some will be left feeling a little disappointed, even if they enjoy what they are seeing in front of them. But more than anything it demonstrates what could work going forward. A larger, twisting mystery with this cast would be very entertaining, and would have bags of potential. As it is Dark Nights with Poe and Munro is something smaller and simpler, but still with enough unique charm to hold itself together.

Bags of atmosphere
Well-acted FMV
Stories have some interesting ideas

Episodes are very short
Some ideas are under-explored

Dark Nights with Poe and Munro is perfect for fans of D'Avekki Studios. However, the short episodes can undermine the great story ideas and actor chemistry on display.