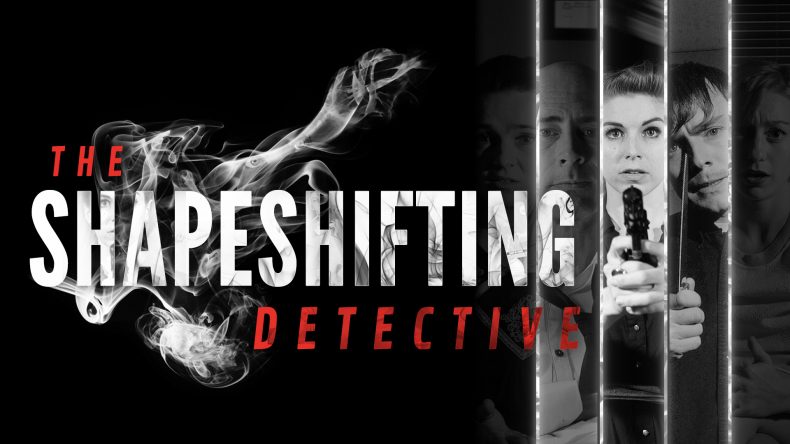 I do like a good whodunnit. Whether it be a board game, a film or TV show, I do love an intriguing murder mystery. I pride myself on trying to correctly guess the killer ahead of time, seeing myself as a less sexy version of Jonathan Creek. The Shapeshifting Detective, with its use of FMV, tries to recreate the small screen magic, but with a more interactive element. So will it be a memorable Poirot-esque mystery or more akin to a bad Scooby Doo episode?

The premise, as the name implies, is that you take on the role of a detective looking to solve a murder, and to do this you will utilise your ability to shape-shift into other people. You use this gift to impersonate people of interest and interact with other suspects in the hope that you can glean additional information from them that may have not been forthcoming with you directly. Under the guise of “Sam”, a local police officer has charged you with investigating a local guesthouse and the people staying there who may have information on a recent murder of a young woman. As you begin your investigations with the initial suspects, you gain the ability to morph into them, and as your enquiries broaden, more people come into the frame, and your potential group of shapes to shift into grows larger too. So as you might expect much of the gameplay revolves around questioning, with different conversation options depending on who is (apparently) speaking to who. You can choose responses and even the option to remain silent and avoid a particular conversation path if you think that would be in your best interest. You progress to the next chapter (an hour later into the evening) when an appropriate amount of dialogue has happened to progress the story, but you don’t need to have exhausted all options and combinations to progress. It means you can decide to continue the story at a decent pace at the expense of missing some potentially juicy information, if you prefer, which works well at managing the story, and how invested that you want to get into it.

However it’s worth noting that if you do go down the exhaustive route it can be a very long-winded task to try out all different potential conversation combinations before moving on with each chapter. This is controlled by not having interactions between every character in every chapter, and if you visit one of those that doesn’t exist, you are presented with an empty set – the inference being the character you want to question has just stepped out for a moment. Testing each of these, and being presented with empty chairs over and over can feel a bit draining and detracts from the immersion. The setting of the game, evokes a very film noir type vibe, not least helped by the atmospheric radio broadcast that is permanently on in the guesthouse or in your taxi as you visit other locations of suspects. It succeeds in setting an eerie tone that mirrors the grim nature of the murder perfectly. Poe, of the Poe and Munro radio show is a particular highlight, with a gravely tone of voice that you could imagine in a 1920’s gangster film, and even when he’s giving simple mundane updates on local happenings, it feels more grand and atmospheric than it has any right to do.

The decision to use FMV was a bold one, but it makes perfect sense in an investigative murder scenario because interactions are predefined by the lines of questioning. As such it works really well, and the quality of the acting is good enough to keep you engaged in the murder mystery plot. And the pre-recorded videos of you pacing through the guesthouse that play on loop whilst you’re deciding who to go and interview next evoke a sense of tension that’s a mix between hit 90’s TV show Knightmare and horror film The Shining, especially at the beginning when everything is new and uncertain. The sheer scale of separate recordings you could end up viewing (over 1600 were recorded) really go a long way to making this experience more enjoyable. Nothing is worse in dialogue-heavy titles as conversation trees feeling short, recycled or worse, nonsensical. Luckily very rarely did this happen during each playthrough, and meant I was more immersed in what was being discussed, and found myself questioning and doubting characters who are fleshed out enough for you to have opinions about. The nature of a murder mystery often feels at odds with a video game. Having the climax of a story come down to a single reveal works in television or film, because there’s no personal interaction to influence the decision. Sure I want to be as clever as Miss Marple, but if I don’t get it right, the perpetrator still gets justice, and I just put it down to bad luck and I move onto the next episode, safe in the knowledge that by the law of averages I must be right at some point. With a video game though, there’s more riding on it personally. If you’ve been invested in a title such as this for numerous hours, and then when it comes to crunch time, you get it wrong, arguably that’s all that time down the drain, and you’re not going to replay it again to succeed, because now you know who did it, and the magic is lost. The Shapeshifting Detective tries to combat this by having one of three randomly selected suspects being the killer, keeping you guessing each time. There we go, problem solved, right?

Well, no actually, in many ways it actually makes it worse. Having the killer being random removes the skill of successfully guessing in the first place, because even if you guess it right, you know it’s not necessarily down to being a great detective, more that you luckily got the right killer out of three. Also, because the culprit could be one of three murderers, the story has to accommodate the serious potential of all three doing it, and as such none of the resolutions feel particularly clever and as complicated as they could be had it been one complex motive or situation. What it does have going for it though, is that you’ll find yourself wanting to replay it, choosing different options in the conversation trees, at least reasonably safe in the knowledge that at the end of it you might get to see a different ending. And that is not necessarily a bad thing, because the pre-recorded interactions are interesting and well-acted, and some of the situations can be quite humorous or shocking depending on your choices, rewarding you acting in certain ways. My only other gripe came reasonably early on, when you have to go to your room. Now normally this would be the point where you can choose to morph into a suspect to continue your investigations. However at the very start, when you first enter your room you haven’t “unlocked” anyone to change into. And I wrongly assumed at that point that the game would let me know when I could start shape-shifting, a tutorial that never comes. As such I progressed a couple of chapters without shape-shifting at all, and conducting all my investigations as plain old Sam. It was only later when I realised my mistake, that it dawned on me how many missed conversations I had, having to start a new playthrough after my current one to enjoy many of the interactions I’d inadvertently skipped over.

As an overall package, The Shapeshifting Detective just about delivers. The character acting and prerecorded scenes are often realistic and engaging, and ofttimes stir up a sense or unease and tension throughout the evening’s goings on. The dynamic of being able to assume different bodies and pose as alternate characters to further your investigation is a nice twist that works really well, as you try to use different liaisons and relationships to your advantage. The aspect of a random killer doesn’t ruin the experience completely but does take the shine of a successful arrest at the end. But it does also encourage replaying, which is recommended, not least to experience as many of the 1600 prerecorded scenes as you can, even if you may have to wade through many empty scenes to find them. A worthy entry into the murder mystery scene, and proof the FMV can be used to good effect these days.

Occasional repetition issues aside, The Shapeshifting Detective succeeds with strong character dialogue, a well-used morphing mechanic and its atmospheric setting.