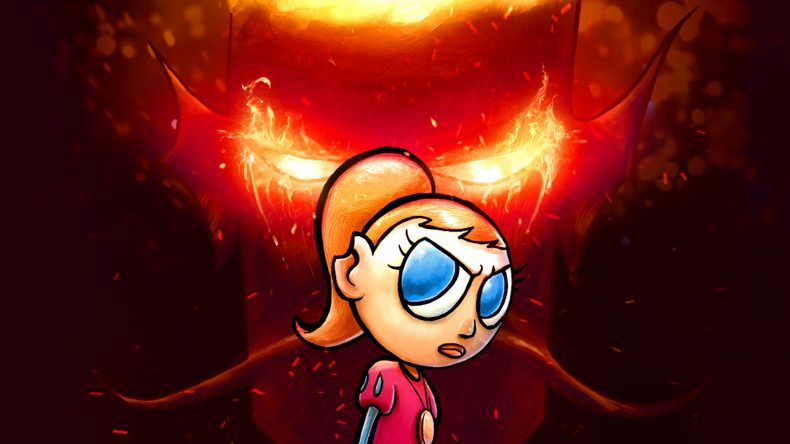 The name should give it away really. Tsioque. Pronounced “chock” (no, I wouldn’t have guessed that either), this game was never going to be a by-the-numbers title. This was always destined to be something a bit different, a bit quirky. And in a genre that’s seen a fairly static formula over the years, the point and click could certainly do with some renewed vigor and a bit of variety. And so step forward Tsioque, where you control a princess of the same name looking to escape the clutches of an evil wizard. Having been imprisoned in her own castle, whilst her mother was away protecting the kingdom, she must use all of her wit and ingenuity to find a path to freedom. And as is always the way with these games, she’ll accomplish this through the use of numerous items in questionable, preposterous scenarios.

So often a deal-breaker in this genre is the quality and logic of the item puzzles. Too simple, and it becomes a lethargic slog to see through to the end, but make it too difficult or abstract, and you’ll find yourself wanting to hunt down the developers to give them a slap across the grey matter for being so obtuse. If I was to place Tsioque on this spectrum, it would be on the easier half, but not too far as to make it full of mindless clicks and eye-rolls. There’s no item combining here; each one has its own purpose, meaning no endless rubbing together of items to see what fits. It’s aware that it could be enjoyed by a slightly younger audience as well as adults, and has tweaked the difficulty so that puzzles aren’t too challenging but still require some head-scratching from time to time. Often I felt I’d reached an apparent impasse, and would take a break from the game for a bit. On my return I would only be a few minutes in and I’d progress, having viewed the situation with fresh eyes, meaning it was a challenge but I was rarely frustrated with its difficulty. But for me, it was when the standard gameplay interspersed itself with faster-paced action that this began to rise above the regular grind of a point-and-click adventure. These elements could take the form of timing your movements to stay undetected from enemies on the castle ramparts, or quickly donning a cloak of invisibility fast enough that patrolling enemies missed you. These segments require reflexes as well as brainpower, and on the odd occasion they appear, they are a welcome addition. If anything, some of these examples aren’t explored nearly enough, such as a duck and jump mechanic used to evade some enemies early on and then never used again. And whilst I wouldn’t want it overused to the point of drudging repetition, a smattering of points where it is reused would have been fine, and to be honest would validate its inclusion in the first place.

Pace is something that can be a bit hit in and miss, but thankfully mostly the former. The main time you’ll notice it positively is actually when you make a mistake, causing you to be spotted and captured by an enemy. You’ll get a very brief scene where Tsioque is surrounded by enemies with very sharp-looking weapons, and then there’s a seamless reset to just before your mistake, allowing you back into the action quickly, but crucially not forcing you to redo a lot of old puzzles because you forgot to save. At odds with this is sometimes how long it can take to travel between areas. Outside of the central hub area where clicking on a location will see you instantly appear there, all other traversal is played out in real-time, and it feels like Tsioque walks just that little bit too slowly, making the wait noticeable, especially given there’s no way to skip it. In fact for me, getting to one location in particular felt like a real drag, and I’d hate venturing there, especially if doing what I thought I had to do didn’t work. It doesn’t break the experience by any means, but in those moments you really notice it. What else you really notice is the lovely art style on display. With everything being hand-drawn, it has a childish charm that it doubles down with pleasing results. Aside from interesting environments, Tsioque herself also displays an abundance of personality similar to Wind Waker, thanks to her cartoon expression being able to display a wide array of emotions. These can range from childish innocence when she’s captured to frustration at her situation or your ineptitude if you struggle in a puzzle. There’s nothing quite like the humiliating disdain of her head shaking at you when you try an item combination that is so ridiculous she won’t even attempt it. Even the enemies in Tsioque – the wizard’s black minions – have a fun charm to them, with characters that are clearly evil, but in an impish way that makes them quite endearing. Their design coupled with subtle sneers and jeers create some funny moments, often as a result of overcoming the puzzles they represent.

It isn’t an overly long game; I completed it with a few missteps and confused meanderings in under four hours, and I really wanted a couple more. But when I think about why, it’s because it grabbed me, and in reality I didn’t want it to be over so soon. I could have easily been enthused for several more hours with Tsioque and I doubt I would have been bored by the end. Although while that’s a compliment, the size of it does dampen the overall experience. However, while it lasts Tsioque presents some varied gameplay and a castle packed full of charm. And the ending itself is as heartwarming and feel-good as you could hope for – a fitting crescendo that will undoubtedly have you smiling throughout. A couple of niggles and missed opportunities don’t stop this from being a decent point and click adventure worthy of your time.