previous
Castlevania Requiem: Symphony of the Night & Rondo of Blood review
random
next
Tsioque review
1 like 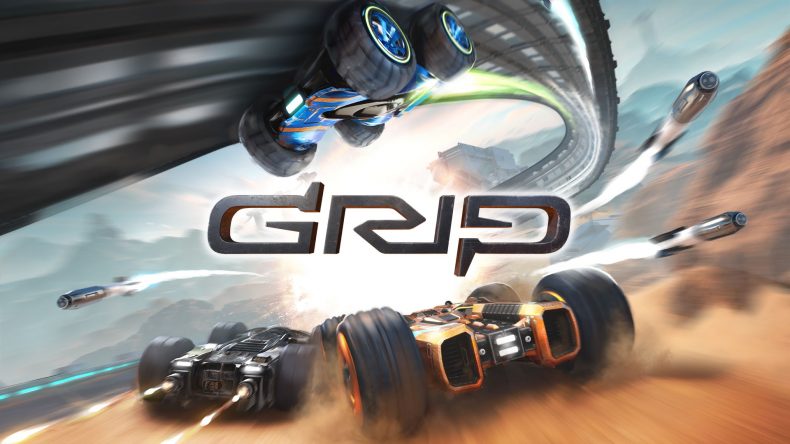 Do you remember Rollcage, back on the original PlayStation? I remember it being on a demo disc (remember those?), which I played over and over for a while because, being a teenager, I never had the money to actually go out and buy it. I was in my twenties by the time I finally played the full game.

Rollcage was an arcade combat racer seemingly inspired by Wipeout, with the twist that your vehicle could drive on walls and ceilings. This made for an even more twisty and nauseating experience than the old Psygnosis game, especially when you’ve got missiles flying past you as you drive along a cave wall.

It turns out that some people did indeed remember Rollcage, including ex-developers that wanted to have a go at bringing the old game back in an unofficial “spiritual successor” kind of way. And so, developer Caged Element was born, and along with it, GRIP: Combat Racing.

It’s actually impressive just how closely GRIP resembles Rollcage, to the point that I would say it’s how your brain might remember the original 1999 game. Although that’s obviously preposterous, because Playstation games tend not to age particularly well visually, purely due to the days of 32-bit 3D being just a little bit blocky and pixelated. Rollcage was far more colourful than its successor however, as GRIP has a more gritty look to it, which actually loses some of the character and charm that its inspiration exuded. You’ll begin by playing the brief tutorial (it’s recommended, anyway) and learning about how your chosen vehicle will stick to walls and ceilings, as long as you’re going fast enough. It’s always been about the physics of aerodynamics, even on PS1, as the vehicles were supposed to have been designed to allow air to flow over them in a certain way that they could keep going at speed along any surface. You’ll learn about hitting the green boost markers that give you a bit of a shove forward, as well as passing through pickups in order to grab items and weapons that will help you win races. That’s the theory, anyway.

It’s standard Mario Kart rules, really. Hit boosts, use weapons to hinder your opponents, and aim to cross the finish line in first place. In comparison to Mario Kart (and GRIP’s closer rival, Wipeout), this game doesn’t feel anywhere near as balanced in either its AI or physics. To be fair to it, Rollcage had the same style, but unfortunately I can’t excuse that, because it’s not 1999 anymore. Games have moved on and as both Nintendo and Sony have shown, it is possible to stay true to the style of older franchises while updating them for current hardware. For example, on several occasions I shot my AI opponents and watched them swerve around or get blown into the air, though they didn’t slow down. On the flip side, when I was ahead and hit by a missile, I usually ended up spinning through the air and landing facing the wrong way. No way back from that – you might as well restart the entire race. If that was a one-off I could just brush it off and move on, but it happened again and again, taking the shine off the experience somewhat. The actual driving is good fun though, and the vehicles are nice and responsive even as you’re at high speed on a ceiling. While it is an arcade style handling model, you’ll still need to watch yourself when going into tight bends, slowing or sliding through the corner. Keep an eye out for boosts and items on the exit too, as they’re crucial to your success. No, I mean it. GRIP is a punishing game, perhaps too punishing in the early stages, and if you don’t hit all the boosts you can find yourself watching an opponent speed by. They’ll stay well ahead in most cases, and that can be a tough pill to swallow when you’ve had an otherwise flawless race. It feels quite heavily weighted against the player, which will put off many people early on. You need to balance the use of weapons, boost pads and pressing the Y button (or your format’s equivalent) for periodic usage of your turbo, to be in with a shout of getting that win. Though you can still progress through the campaign without winning too often, thankfully.

The tracks themselves look great, from snowy mountain sides and rocky deserts to industrial complexes and futuristic cityscapes. They’ll twist and turn in rapid succession, throw you around with their bumps and hills, by day or by night, all with a dash of neon and a fair amount of grit. Explosions are impressively bright and light up the darkness during night races, while flares and big red “X” boards will signal the places you should and shouldn’t venture. That said, due to some odd design choices in some of the stages and the prevailing sense of speed, it’s entirely possible for you to find yourself unable to see where you’re going. Whether it’s due to the twists and turns of caves, or the hills and drops of the mountains, you can be propelled into walls or overhanging signs and scaffolding without warning, especially if it’s your first time on a track. Add to that the harshness of the AI and you’ll find your early hours with the game quite
unforgiving and frustrating. It gets better once you’ve learned the tracks, but where the game is actually at its most fun is during the arena games. Deathmatches in particular are chaotic, but seeing customised vehicles flying around frantically trying to blast opponents or avoid hails of gunfire and explosions is incredibly fun. You can even drive along the ceiling of the arena, Rocket League-style, before dropping down and unleashing a swarm of rockets on an unsuspecting rival. There is even a Trackmania-style “Carkour” mode, in which you have to find your way around almost puzzle-like tracks in the fastest times, finding your way onto leaderboards for the ol’ bragging rights of old.

There is a lot to like about GRIP: Combat Racing, from customising the various vehicles with your own paint colours and decals, to the chaotic fun of deathmatches and that feeling of nailing a race with a perfect blend of speed and precision. It’s just frustrating that you have to power through the odd (and sometimes plain unfair) difficulty spikes of the opening hours. Stick with it, though, and you’ll find an entertaining old school combat racer behind the tough entry doors.

Difficulty is harsh in the beginning
Some awkward track design

While often fun, GRIP: Combat Racing’s opening hours will put some folk off, due to some iffy balancing issues and awkward track design. Stick with it and you’ll find an entertaining, old school combat racer.