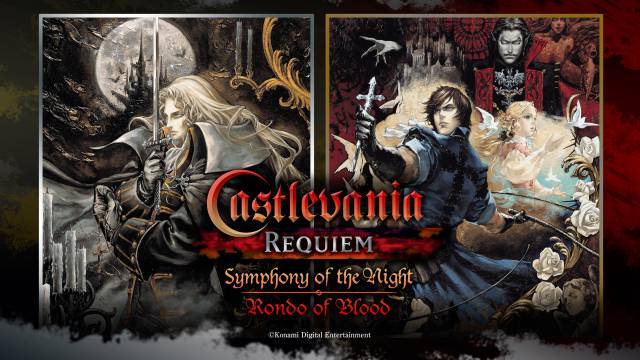 Most people who grew up gaming in the 90s will have played at least one of the Castlevania games, unarguably one of the most famous and lauded franchises in history. Konami’s branching, multi-protagonist series has been around since the days of the NES, and as such comes from a time before developers started taking it easy on gamers in an effort to appeal to a broader spectrum. Back in the 90s, gaming was a gauntlet, and you were either good enough or you weren’t.

While the Castlevania franchise was never classed as one of the absolute toughest, it had its fair share of controller-snappers. Rondo of Blood (or Castlevania: Dracula X as it was known on the SNES) was one of the harder offerings, but was also one of the first to begin experimenting with a design style that would eventually come to be known as “Metroidvania” (thanks in part to the existence of Nintendo’s Super Metroid games).

Castlevania: Requiem appeared recently quite out of the blue to deliver Rondo of Blood, packaged up with Symphony of the Night (a later title considered by many to be among the greatest games ever made), to the PS4. The only tweaks are the additions of modern touches like rumble support and auto-save, and the original games are presented very much the way we remember them. It’s not always easy to review retro games like these by modern standards. Things that seem rote today were new and fresh back then; graphics which today are incredibly dated were cutting edge 20 to 25 years ago. The one thing that tends to stand up in the best retro games is the gameplay itself, and while Rondo of Blood (1993) shows its age in its brutal difficulty, Symphony of the Night (1997) is still a joy to play.

It seems likely that these two were chosen for Requiem because of the story connection. Rondo of Blood takes place before Symphony, and follows Richter Belmont on his quest to rescue his wife from a recently resurrected Count Dracula. You’ll battle through 9 levels, but unlock secret stages as you go – and can even unlock Maria Renard as a playable character. While RoB isn’t as intricately designed as later Metroidvania titles, it shows the first elements that would eventually evolve into the multi-branching, backtracking adventures we associate with the genre today.

As I said before, some of it is brutally hard (or maybe I’m far too pampered by modern games), and I struggled with even the first few stages, but it’s not hard to see why people fell in love with these games back in the day. The soundtrack alone evoked memories I hadn’t conjured in decades, and the music, graphics and gameplay combined to whisk me back to a much simpler time, when the industry was young, the internet didn’t exist as we know it today, and we’d put ourselves through a special kind of hell to finish a game. Symphony of the Night picks up more or less where Rondo of Blood leaves off, and is rare for the franchise in that the protagonist is not a Belmont. Instead, you play Alucard, half-human son of Dracula, and must battle both against and alongside Richter and Maria to overthrow the malevolent Shaft, a servant of Dracula who intends to resurrect him once again.

Released four years after RoB, Symphony of the Night is a better-looking and smoother game, and Alucard controls far easier than Richter. While the story is still fairly simple, the atmosphere is utterly captivating, and it’s not hard to see just how much this classic influenced modern titles like Slain: Back From Hell and Dead Cells.

Alucard doesn’t have a whip (another Belmont family exclusive), and instead collects weapons as he travels through the castle. Interestingly, there’s a rudimentary levelling system that sees his stats improve as he progresses. These days every other game has some assortment of RPG-lite elements mixed into the formula, but in the 1990s such a thing was rare. Along with his growing arsenal, it adds welcome depth to the adventure. It’s hard to put into words how it feels to play these games again now. I’m not a particular fan of retro games or retro stylings, but I spent hours with the Castlevania franchise on the NES and SNES, and while the memories have been mostly buried under dialogue wheels, microtransactions, photo modes, HD graphics and a myriad other modern conventions, feelings and sense-memories from my childhood kept flashing up as I played.

Newcomers and younger players might wonder what all the fuss is about, but fans of retro-gaming and older pad-bashers like me won’t be disappointed with Castlevania: Requiem. Rondo of Blood and Symphony of the Night compliment each other wonderfully, and present a mix of beautiful pixels, rousing music and sometimes brutally unforgiving challenge. Additional touches like the option to adjust the visuals to look like you’re playing on a 20-year-old TV will mostly go unused, but pluck at the nostalgia-strings nonetheless. This is a great little package for a reasonable price, and is absolutely recommended for retro fans and those who hanker after the early years of console gaming.

Castlevania Requiem: Symphony of the Night & Rondo of Blood officially announced for PS4, out October 26