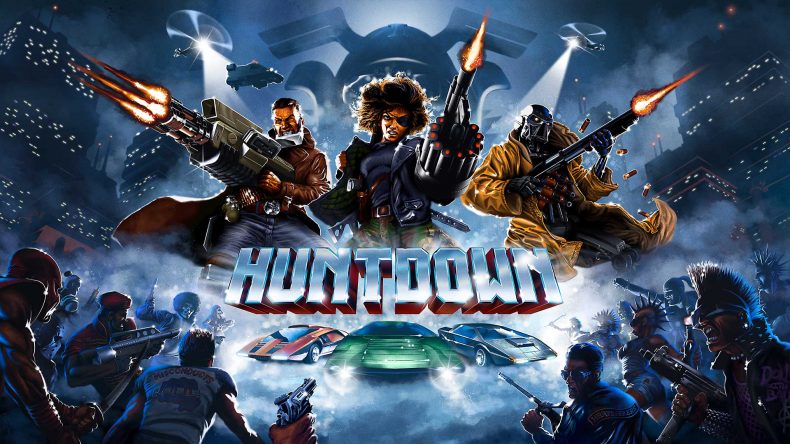 Everybody loves a bounty hunter. Good, evil or something in between, there’s nothing cooler than a lone ranger for hire. You only need look at the popularity of Boba Fett or Samus to see the lasting appeal of this dangerous profession. If video games are to be believed, we’ll need a lot of them in a future filled with corrupt governments and gang warfare. As you may have guessed, this is the role you’ll be playing in 16-bit run and gun shooter Huntdown.

After selecting one of three playable mercenaries (or two if you’re playing co-op with a buddy) you’ll be briefed on the gangs that have taken over the city and flung into the action. Each group of street toughs has its own theme as well as five key members that serve as bosses along your journey to deliver brutal justice. From bikers to hockey players, you’ll be facing an array of gun wielding goons.

The typical run and gun game would, as the name implies, feature running in, dodging bullets, and blasting foes. Although this is an option in Huntdown, you’ll also find boxes to duck behind and doorways you can duck into to avoid fire. Taking cover is a crucial way to avoid taking damage, and these tactical elements make the game feel more like a 2D Gears game than Contra. The enemies will use the environment to their advantage too, leading to show tense shoot outs if you’re low on health. You’ll start off each stage with a fairly lackluster pistol, but soon an array of discarded weaponry to switch to at random. There are devastating short range shotguns, rapid fire machine guns and explosives that can devastate enemy and cover alike. You can only have one extra gun and a throwable with you at a time, so figuring out which weapon will suit upcoming situation is the key to taking down the top gang members.

The boss fights against the goons on your hit list are both highly enjoyable and greatly varied. The battles really bring out the character of the gang enforcers, and you’ll find yourself coming head to head with ex-military-type-mech users and knocked about like a hockey puck by a goalie. Getting past one of these encounters alive presents the perfect level of challenge, but you’ll often need a few attempts to learn the attack patterns.

Huntdown has an array of difficulty options to suit veterans and newcomers alike. Normal difficulty never felt unfair to me, with regular checkpoints and enough health to survive a few blunders. There’s also an unlockable extra hard mode if you’re seeking a real test of your skill, but know that you’ll be more likely to beat Contra without the Konami code than Huntdown on Badass mode. Completing a level is all well and good, but there are also extra objectives to take on for the more dedicated bounty hunters. Each stage challenges you to defeat a number of enemies, collect 3 caches and complete it without dying. I never found myself struggling on the kill count, but finding the caches takes a keen eye. They’ll sometimes be behind breakable walls, or even carried by a fleeing foe, and it will require rushing into danger to catch the cheeky little blighter.

Huntdown’s visuals and audio add to the urban world and its inhabitants in a fantastic way. The 16-bit pixel art is just magnificent, and adds so much character to the varied environments: inner city bars feel frequented, and the streets feel dangerous. The world comes alive even more thanks to the unexpected, yet excellent voice acting. Goons all scream at you as they attack, and the bosses deliver some perfect one liners. Huntdown is the perfect evolution to the run and gun genre. The light tactical elements add some depth to a usually simpler genre, and the setting is brought to life by the exemplary aesthetic design.

Innovative gameplay and incredible aesthetics make Huntdown a must play run and gun shooter. With an array of difficulty options, side objectives and even co-op, it's a perfect starting point in the genre for all gaming backgrounds