previous
What the Golf? review
random
next
Huntdown review
0 likes 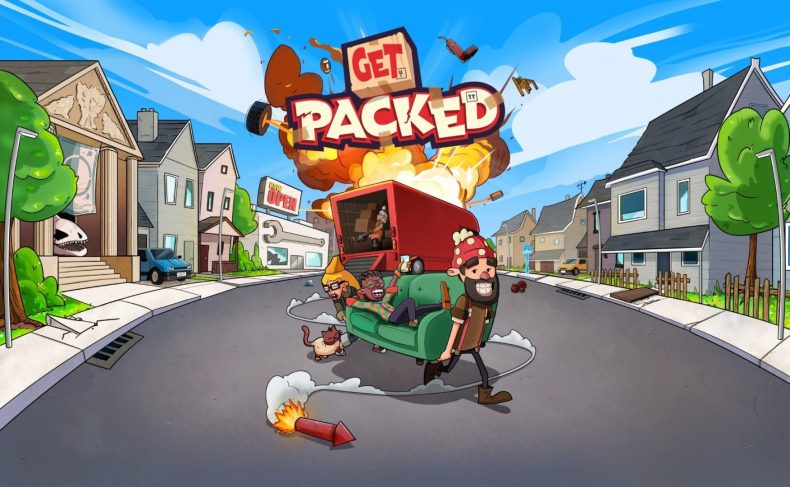 Google Stadia certainly hasn’t gripped the public, especially when it comes to multiplayer games. Whether this is likely to change is a mystery, but that isn’t stopping the service from trying its hardest to engage with the gaming masses. You may not have heard a lot about Get Packed, or maybe you have but assumed that the recently released Moving Out is the same game. It was less than a month ago that I reviewed DevM Games and SMG Studio’s co-op house removal sim, and even I was baffled that two niche games that look very similar could be released so close together.

I want to make it clear that although they may appear to be almost identical, Get Packed is significantly different. Yes, you are helping residents move house, frantically rushing through rooms to pick up furniture, but how you do this is actually easier to do. The town of Ditchlington has been bought out by a huge corporation known as Industrial Sat Co., and one of their first goals is to boot out all the residents living there, and this is where you come in. As an employee for Last-Ditch Removal Company, you must travel from house to house (or factory to supermarket) to grab as much stuff as possible before the three minute timer runs out. It’s a colourful game, filled with wonderfully designed levels that throw different mechanics at you. You may have one house that has a trampoline in the garden that allows you to get to the top floor, or a slide in an office that lets you throw stuff onto it to get items moving faster towards the ground floor. Unlike Moving Out, getting through tight corridors or packed living spaces is much easier and faster, making it far more chaotic and fun. You can also use both hands to pick up two objects at one time. Not only does this help you to earn more money, but it also means you grab more stuff so your friends can’t.

You can earn plenty of money by being efficient, grabbing the better items and getting them to your van quickly, but it you’re clumsy and not paying attention, many of the furniture you pick up can become damaged. Not only does this lose you a chunk of the money you would otherwise have received for being careful, it forces you to think about the best way to remove the items, adding a layer of strategy to how you play.

Flat-packing big items of furniture is also possible, and this helps to turn double beds or corner sofas into small packages. To do so you must be holding them with both hands, but it can be tricky to do so. Once your removal van is full, you can send it off to make the drop off, but while doing so you can’t gather anymore money. Every location has exclusive items that bag you more cash, but you must find it before your friends do or the timer runs out. Get Packed is fun on your own, but even better with others. The hilarity of grabbing items which your friends or family want, or stopping others from picking stuff up by grabbing them and dragging them off adds to the mayhem. It never got boring, but what’s more important is that it never became stressful either. It’s tons of fun, and my family and I laughed a lot more than we probably should. One mode has you competing with each other to grab as much stuff as you can, and another just wants you to destroy entire locations and get more breakages than your opponent. There’s tons of stuff to do, but whilst there is online multiplayer, you may struggle to find anyone due to few people using the Stadia.

Whilst Google Stadia continues to grow, Get Packed could be the game to get more players involved in the service. Its faced-paced and crazy style of play is more than enough to provide hours of entertainment. Playing in co-op is much more entertaining than playing alone, but getting a game online is harder than maneuvering a piano through a cat flap. Regardless, Get Packed is a fantastic exclusive, and should definitely be considered if you’re looking for something to play with your friends and family.

Almost non-existent online multiplayer
Using both hands can be frustrating