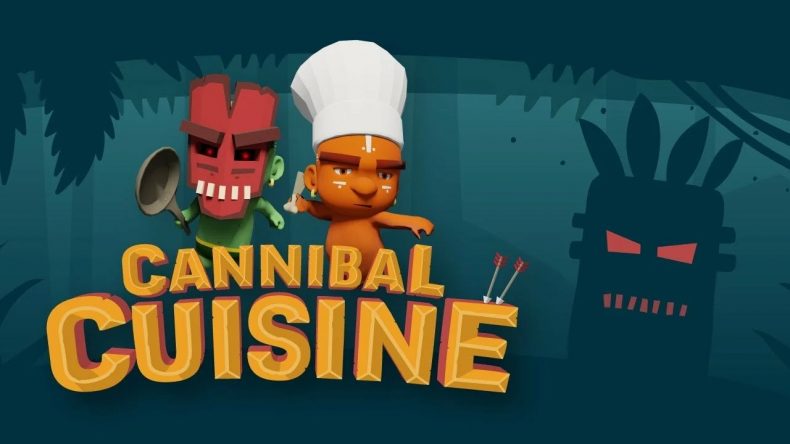 It can’t be easy being a cannibal [Editor’s note: and you’d bloody well hope not!]. It just seems like a difficult diet choice to maintain logistically. Fortunately for Hoochooboo, he has a tribe happy to gather ingredients for him and feed his gluttonous appetite. Cannibal Cuisine sees you playing as one of these lackeys, and feeding your larger than life leader.

If you’ve played an Overcooked game, you’ll be pretty familiar with what to expect from Cannibal Cuisine. As a group of 1-4 players, you’ll be combining two ingredients and cooking them as fast as possible to your chunky overlord. The twist is that one of your food sources needs hunting first, and many tourists are harmed in the name of good eating. Gathering body parts for the oven is as easy as running over to a crowd and mashing the attack button, but the tourists don’t go down without a fight. The combat isn’t exactly nuanced, and if you don’t heal regularly they’ll be some time consuming deaths. You’ll need to cook yourself some grub to keep yourself fighting fit, and trying to keep on top of all this under a time constraint is not easy. Hopefully you’ll have some buddies on hand to take some of the work load.

Having a team by your side and assigning tasks makes Cannibal Cuisine infinitely more enjoyable. The madness of rushing to make a Spicy Finger, passing each other ingredients and navigating the difficult terrain: it’s a lot to manage without good communication. Throughout it all there’ll be many a chuckle, and the potential for broken friendships when you tumble to your death with a kebab in hand.

Each level has an assortment of obstacles guaranteed to make your cooking more difficult. There are bottomless pits, shark infested waters, and even lava trying to keep you from earning Hoochooboo’s praise. Having to travel to a bounce platform to return to your cooking can make all the difference between a culinary delight and a lump of charcoal. The movement controls are a little imprecise, however, and sometimes I ended up tumbling to my doom when I was sure it was safe. With the added time pressure, it can be frustrating. One way to navigate the pitfalls is with the dash ability; one of four skills that each character can choose to take into a level. There’s a stomp to help in combat, fire breath for cooking, and even a healing totem. Mixing all of these together can really help your score, and it’s fun trying to use them in tandem to maximise points.

So much of Cannibal Cuisine is based around working together, and because of this the single player mode is incredibly dull. Including the option to play solo at all feels pointless, as the stages are the same regardless of how many tribe-mates you bring with you.

Fortunately on Switch, it’s easy to pass a Joy-Con to a friend and bump up the numbers. With up to four players supported locally or with people on your friends list online, you’ll be cooking up a storm in no time. There’s no option to play with randoms online, so if you don’t have a pal with a copy of the game, local is your best bet. As well as teaming up to cook for your master, there’s also a versus mode where two teams of up to two players can battle to get the high score. Some areas are off limits to enemy teams, but there’s still the opportunity for a lot of mayhem when you steal someone’s ingredient from under them. With four stages to choose from, it’s a nice distraction from the main game.

Throughout my time with Cannibal Cuisine, I just couldn’t quite shake the feeling that it doesn’t do anything better than the Overcooked series, and yet feels incredibly similar to play. There aren’t as many opportunities for chaos in the environment, and the controls are just a little too loose for my liking. The cannibal spin on the genre doesn’t change the gameplay enough to truly set it apart from other games.

Cannibal Cuisine is great fun with friends, but imprecise controls and a lack of innovation make it hard to recommend over similar games. There’s certainly a novelty to putting a full arm on the stove, and the chaos is entertaining, but there are just better options out there for co-op cooking.

It's an absolute blast with friends, but dodgy controls and a lack of new ideas struggle to help Cannibal Cuisine stand out in the genre.