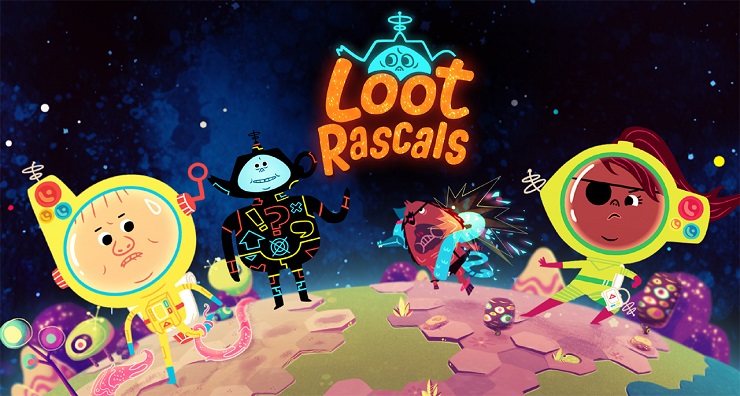 Loot Rascals is an odd game. You begin with an off the wall narration from a delightfully laconic Scottish fella with a teapot for a head advising you that a bit of a mishap has occurred and the Big Barry (a nickname, not a technical name) has been lost, and it is your job to get it fixed up so you can continue your mission to an intergalactic space camp and assist the Big Barry in delivering its liquid anything. En route though you see that the Big Barry has lost his head and the planet you’ve crashed on is inhabited by angry rascals, and your new mission is to escape.

If none of this makes any sense, don’t worry because even in game it doesn’t really make any sense, but that doesn’t matter because it is presented in such an honest and matter of fact way that you just take it for what it is. In fact, the whole presentation of Loot Rascals is like this, off the wall weird, but presented with such enthusiasm that it just works. Loot Rascals is a hybrid of a turn based card strategy game with rogue-like elements. Your goal is to move across the board and make it to to a warp zone that will teleport you to the next procedurally generated world until you reach the fifth world and complete your escape. The action is turn based of sorts with each movement across a hexagonal square being one move. Each move is linked to a day or night cycle with six moves equating to a day and six more for night. The day and night cycle is significant because it will dictate in which order you fight when you encounter a Rascal; some attack during the day first, but are defensive at night and vice versa.

Your defensive and offensive rating is determined by a number of cards that you are given at the beginning, and find after defeating a Rascal. Cards will have attack or defence statistics to them with some having additional parameters like +2 if placed on the top line or -1 if a card is on the right, for example. At the start you are attributed a few cards to give you some attack and defence points, and you can pick up further cards by defeating enemies. After a while you will spend a bit of time trying to work out the maths equations of the various cards you have in your possession to obtain the best possible rating for defence and attack, and utilising that information work out when best to attack higher levelled enemies. If you have too many cards you can decompile them for tokens which can be used at the base camp to replenish health or set traps etc. There are also mini quests you can embark on which generally involve you finding a card by killing the Rascal that stole it and returning it to the character in the Dome for rewards like additional card slots.

Each world is generated on a procedural basis with a unique seed number should you wish to return to that particular one again. Upon death you lose all progress including the level you have reached and the cards you have managed to collect. Death comes often as it takes some time to understand that although there is a RNG element in the way the Rascals move around the map and the cards they are likely to drop, you do have some control in terms of the mathematics of your cards that you hold. For skilled players there is a surprising level of detail and tinkering available to maximise your statistics as you play. There is no multiplayer per se, but there is a nice element that links other players into your world whereby if you kill a Rascal that has killed another player, it drops the card that it stole from them. You then have the option to return that card to the player or keep it for yourself. If you do return it, you have the possibility of the ghost of that player turning up in your game at a later date to assist you with your battles and will remain with you until they are defeated or you are. In addition, to encourage regular repeat play there are daily challenges and leaderboards to compare your score against other players.

After a few hours and countless failures I finally managed to get the hang of moving about, trying to minimise the amount of turns possible and timing my attacks on much stronger enemies so I attacked first. There is a great rhythm to it and the meta game of trying to arrange your cards in the most effective way possible to maximise your attack and defence is certainly engaging. Unfortunately, at least for me, after those first few hours of trial and error I felt like I had seen as much as the game had to offer. For more skilled players and certainly those that like to tinker about, there is a fair amount to work with as well as trying to combat the randomness of the procedural generation. The jaunty style of presentation is a lot of fun as well so it makes it a fun title to dip in and out of.

Loot Rascals is a quirky turn based card strategy game that incorporates rogue-like elements. The off the wall presentation hides a surprisingly deep system to manage, but luck often hampers the best laid plans meaning progression feels limited at times.