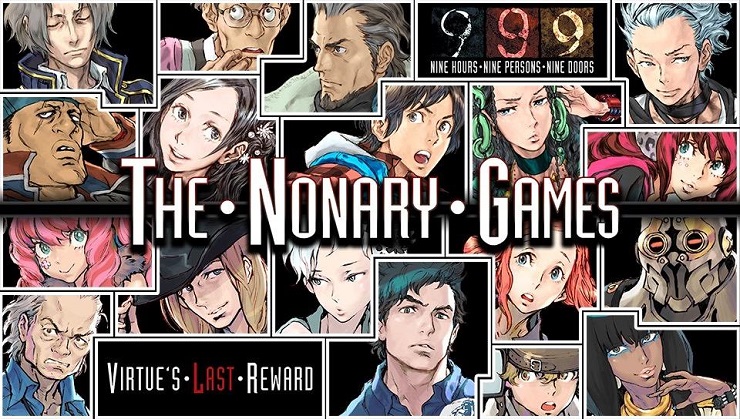 The Zero Escape series is pretty special to me. When I bought a 3DS XL a few years ago, my friend let me borrow a few of his DS games and 9 Hours, 9 Persons, 9 Doors was one of them. I didn’t really know what to expect going in, but I’m glad I did. 999 turned out to be superb and it is still one of my favourite gaming experiences of all time. 999 (and Virtue’s Last Reward) is an adventure visual novel with branching paths and multiple endings. The Nonary Games is a collection of both 999 and Virtue’s Last Reward for PlayStation 4, PlayStation Vita, and PC. This is a similar release to Danganronpa 1.2 Reload that released on PlayStation 4 from Spike Chunsoft and NIS America. This review will not have any spoilers for both games included in the package.

Having played both games multiple times in the past over Nintendo DS, iOS, and PlayStation Vita in preparation for the third part of the trilogy that released last June, I was excited to jump into 999’s first proper remake that added voice acting, widescreen visuals, and higher resolution assets. I still prefer playing visual novels and adventure games on handheld devices so this review will be for the PlayStation Vita version. The combination of touch controls and buttons makes visual novels a much nicer experience for me. The Zero Escape Games are linked in multiple ways. On the surface it may seem like each entry is just a new set of characters experiencing similar things, but as the story progresses and more paths are revealed, Kotaro Uchikoshi’s genius is revealed. You have nearly equal parts visual novel storytelling and escape room sequences. Decisions also matter. In 999 you select which room you’d like to go to next to try and finally reach the end while in Virtue’s Last Reward, you either ally or betray to move further. There are plot points in both games that will make sense at different points in your playthroughs and some really make you question everything happening in said game.

You play as Junpei in 999 and are forced to participate in the Nonary Games with 8 other characters as the name suggests. Taking place on a cruise ship, you slowly uncover the reality of the situation and grow to care for the other participants both as the protagonist in game and as the player. Each person has a bracelet that is bolted onto their arm. Entering a particular room requires the digital root of each person’s bracelets to match the number on the door. There are multiple endings based on your decisions and which doors you go through. The true ending is worth the effort of the replay as this enhanced release of 999 has the quality of life features I absolutely need in visual novel games. You can skip text easily and even skip text you haven’t read before if you please. The flowchart addition is welcome as well. Fans who have played the original DS game will find a particular thing changed in the path to the true end. I’m not a fan of the change at all, but I understand why it was done. I don’t want to give more away because of spoilers. I love the voice acting and decided to stick with the English option for my main playthroughs after trying out the Japanese one for a single ending.

Sigma is the protagonist of Virtue’s Last Reward and this release is nearly the same as the original that released on Vita a few years ago. Some of the text has been fixed, but otherwise it is the same game on Vita. Virtue’s Last Reward, the second entry in the Zero Escape series, saw the visuals move to 3D on both the 3DS and the Vita. This resulted in higher resolution assets and 3D character models. It also had full voice acting. Virtue’s Last Reward is a game I rate slightly lower than 999, but it still a cut above most of the games in the genre. It is a pity that the conclusion to the trilogy didn’t live up to the super high bar set by The Nonary Games. Visuals in 999 are mostly great. The character portraits and animations are smooth. A lot has been used from the iOS port that was already high resolution, but there are some assets that look completely out of place. It suddenly feels like you’re back on the DS when you see a completely blurry photo of a ship in a frame. I prefer the 2D aesthetic seen in 999 over the 3D one in Virtue’s Last Reward for sure.

Both games have memorable music. The puzzle section tunes will immediately remind you of your own eureka moment when you’ve spent an hour or more trying to figure out why the damn safe won’t open in a room. Both games also have a track each that will stay with you long after concluding The Nonary Games.

The Nonary Games is an easy recommendation to anyone who enjoys a bit of mystery, thrill, and adventure in their games. The puzzles are brilliantly designed and the characters will make you want to play the next game as soon as possible. I wish all the dialogue was voiced in both games included. It would have made the package perfect.

Few low resolution assets
One change to an element in 999

You may also like
zero escape: the nonary games