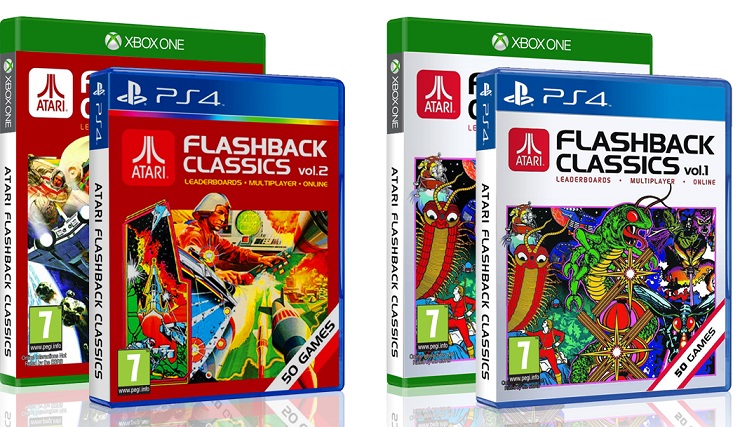 There’s nothing wrong with revisiting the videogames of a distant age, as long as you do so with the caveat that things have changed and they’re probably not as good as you remember; the fuzzy embrace of nostalgia may not be enough to ruin those memories you have of your favourite childhood games. Atari paved the way for so many developers, and brought us some of the most important games ever: Pong, Adventure, Asteroids, and Yars’ Revenge to name a few, but do we really need to play them now – in an age where we can play The Legend of Zelda: Breath of the Wild or The Witcher 3 whenever we want?

Look, I’m under no illusion the visual fidelity and the mechanics featured in these collections aren’t a patch on what we get to see today, but they’re so integral to the history of videogames, and you know, they’re still pretty fun. I lost a good hour or so to Steeplechase — bloody Steeplechase! Super Breakout was another I played as a kid, and it’s still addictive now; many of the games on these two collections are simple, but still manage to be a time sink, and I regret absolutely nothing. Adventure was probably the original RPG; walking around dungeons, trying to solve puzzles and avoiding monsters is essentially the benchmark of every sprawling fantasy game ever, and even now, it grabbed me. I’d never played Adventure before, but as I was playing my wife looked at the screen and saw it, squealed with excitement and began to tell me how this was the game she’d play with her father and siblings as a child. It holds a special meaning to her, and that’s one of the great things about the Atari Flashback Classics collection.

Not only are there 100 games to play through, many of them have the original instruction manuals scanned in so that you can look through and see the amount of effort put into them. Everything’s digital and in-game now, but back when Atari was king, the manuals were a vital piece of the videogame market, and it’s clear looking through some of these how much detail and talent went into making them. A prime example is the artwork for the Swordquest manual, as it has a full comic book inside – it’s wonderful.

I wouldn’t say every game is great; many of the games are dated, or just don’t manage to hold your attention as some others. The sports games didn’t really do it for me (other than Real Sports Boxing which is still amazing), and games like Basic Math and Casino were just tedious. Personally, it would have been better to strip both volumes down to one collection and give us the absolute best, rather than filling it with average to low titles. The collection has been given a HD polish, and there are online leaderboards to compete against other gamer’s scores, so there’s definitely an attempt to bring these up to date. Atari Flashback Classics Vol. 1 and Vol. 2 are absolutely wonderful, and there’s so much to play on. I doubt anyone who’s never played Atari before will think twice about picking this up and all those whippersnappers too busy shooting soldiers in the face on Call of Duty will want to take on the aliens of Yars’ Revenge (which was recently played by Eugene on The Walking Dead), but still, many are enjoyable even now. It’s worth noting that the control systems aren’t explained very well, and getting the control panel up on screen is a bit finicky.

There’re games on Atari Flashback Classics Vol.1 and Vol. 2 that many will never have played before, such as Save Mary, so those that did grow up playing Atari will still have stuff that’ll be new to you. Each game is a history lesson, showcasing some of the best videogames of all time, and the manuals are remarkable, showing the love developers, artists and creators all had for Atari and their craft of a distant age of videogames; we owe a lot to Atari, so why not start by playing these two volumes?

Whilst this collection has a lot to offer, those unfamiliar with Atari probably won’t want to spend that much time with these bonafide classics.