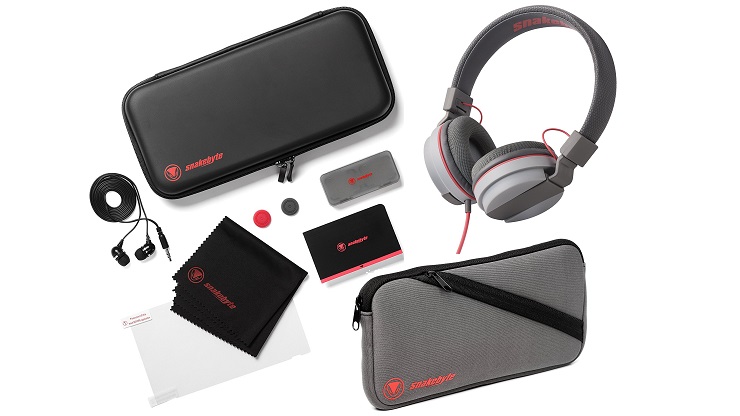 Twenty days have passed since the Switch launched and there’s a considerable number of accessories already available for it, ranging from cases for the machine in tablet mode, to screen protectors and even stands to hold it (provided the Kickstand doesn’t do the job for you).

One such manufacturer providing you with ways to outfit your Switch is Snakebyte, who come at us with three items which are good to get you started. Similar to the Venom starter pack I reviewed a while back this set comes with a hard case, a screen protector and a set of in-ear headphones, which is similar to the Venom offering. The case is the same right down to the mesh on the inside and the plastic straps to hold the console in place; the only difference is the Snakebyte branding on the top because the headphones are identical as well.

What is different though is the screen protector; it’s not as tough as the other proposition, feeling a little bit flimsy to the touch. This does have a protective film on both sides, plus a smoothing card as well as a cleaning cloth, ensuring for a better application, but more tendency to attract dust and as-such air bubbles. It’s thinner than the Venom offering, but as far as protecting your screen from scratches goes it’ll do the job.

Where this pack differs from the Venom proposition is that it comes with a game case (with space for four cartridges) and caps for the Switch thumbsticks. The game case is a welcome addition as the carry case doesn’t include pouches for the cartridges, so having something for those is especially handy. I can’t help but feel the thumbstick caps are a bit superfluous though, because the Switch sticks are grippy enough without them, however, they are in classic NES grey and red, which is nice. Speaking of that NES colour scheme, Snakebyte offer a separate carry case for the Switch in the form of a grey and red neoprene carry bag. Unlike the case that comes in the starter kit, this is not a hard shell, instead it’s a soft lined pouch that the Switch slots nicely into, designed to protect the machine from the elements. It’s a snug fit, and as with the hard case there’s no storage for cartridges. There is a front facing pocket for you to store other accessories though, so if you don’t mind them rattling around a smidge you can put them in there.

It’s very fetching to look at, but the problem with the carry bag is that it isn’t very tough, it’s literally designed just to house the Switch and protect it from general wear and tear as you move from place to place. It isn’t designed to help the machine withstand the impact of a heavy hit or a drop from height – you have been warned. Also in that fetching NES grey and red is a set of stereo headphones branded as ‘for Switch’. Don’t worry, though, as there’s no reason why you can’t use these for other devices. They’ve got a pair of 40mm audio drivers meaning you’ll get decent sound quality from them allowing you to hear every thwack of Link’s sword and every cut you make in Snipperclips. They are an on-ear set though, meaning that you unfortunately don’t get even passive noise cancelling like you would from an over-ear or in-ear set. I also found these to be quite tight on my ears leading to considerable ache after a short period of use.

These do have a clever addition though; on the right ear cup is a separate headphone jack port, which may sound odd, but the idea is that if you’re playing with someone else when you’re out and about they can plug their headphones into yours and piggyback off of your audio. You’ll potentially look a little bit silly doing it, but it’s a rather nifty feature and I’ll be surprised if a bunch of other peripheral companies don’t steal this idea for their products.

As with any accessory you’ll get in these early times, each of these items have their good points and bad points. The starter kit comes in at only a pound more than the Venom kit, and has more value thanks to the cartridge case and thumb grips. The Neoprene carry bag is light and attractive, but isn’t going to give you the peace of mind a hard case would. While the headphones have the issue of being tight and allowing outside sound in, the additional jack for people to join you is a clever idea despite it looking awkward socially. All round, all three of these are attractive in their own ways and are worth owning.

Whether you’re looking to protect your £280 investment or if you’re just looking for decent sound quality without being an audiophile, Snakebyte has you covered.

A new range of Zoopa drones from Snakebyte now available