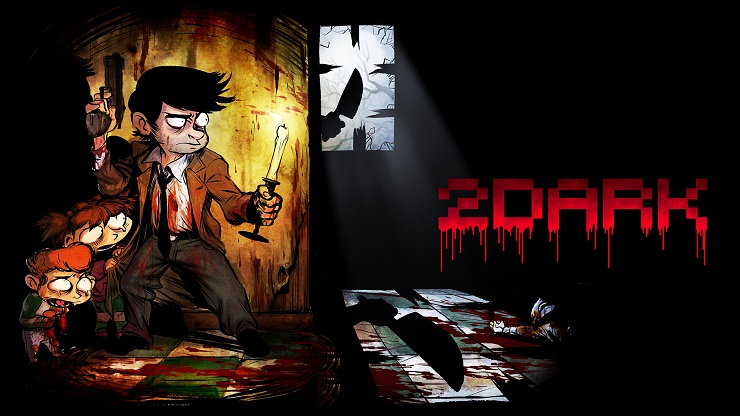 Indie horror games are some of the best around, normally tackling subjects that are deemed too unsafe for most AAA studios to broach. In 2Dark, developer Gloomywood takes on one of the hardest topics there is: child abduction and murder. But it doesn’t quite hit the mark, partly due to its tone never quite feeling right. Partly because it’s not quite the game you’re expecting.

At the beginning we’re introduced to the main character, Mr Smith, on holiday with his wife and two children. They’re camping in the woods, and to give Mr Smith a moment to put up the tent in peace, Mrs Smith takes the children off to gather some firewood. A grave mistake, as it turns out. Sure enough, screams ring out in the forest and Mr Smith (seriously now, I’m already sick of writing that unimaginative name) discovers his wife’s decapitated corpse in the darkness of the woods, and is forced to watch his children driven away in the back of a van.

Cut to seven years later, and our protagonist has been forced to leave his job as a detective, having assaulted suspected child abusers, and he has become obsessed with finding any of these disgusting monsters in the city of Gloomywood. Never abandoning the hope that his children are still alive, out there somewhere in this place that has more horrendous crime than Gotham City. This work is done from his home, a place that, much like Gotham City’s favourite crimefighter, has a secret room – one that can only be opened by putting a fake book on a specific shelving unit. This is where the ex-detective stores the evidence he finds at the various crime scenes he now investigates as a vigilante. This is also a neat little trick that 2Dark uses to teach the player how to use the inventory system, but that’s the only intuitive thing about said system. Instead of merely having the book in your inventory, you have to physically equip it every time you approach the shelf to open the secret door. Annoyingly, this applies to any key picked up throughout the game too, and you can only equip it in your weapon hand, meaning you can’t hold a key and a gun or melee weapon at the same time. Yet this guy was apparently trusted with a firearm, during his time on the force.

Now that he’s a vigilante, Mr Smith has to rely on the local news to find his targets, before gathering evidence of their crimes, and potentially discovering new criminals connected to each child abduction case. On the wall in his secret room resides a map of Gloomywood, onto which photos of suspects will be pinned as they’re discovered. This map acts as your portal to each level.

As you might expect from a game called 2Dark, the lighting is often scarce. The visual style is quite cool, to be honest, with a low resolution, almost PSOne look to the characters that inhabit Gloomywood. The whole game looks like a mixture of 2D and 3D, viewed from a kind of top-down perspective, with a nice lighting system that makes every shadow really pop on screen, meaning that light sources are absolutely essential. But in a game based primarily around stealth, smart usage of light is also important. That’s where the perception of 2Dark is a little off. The artwork and visual style suggest that it’s a horror game – hell, its opening scene in the forest suggests that too – but it’s closer to Hitman than anything else. Only, nowhere near that quality. And the game doesn’t actually tell you this, which brings me to my next point: the tutorial is extremely poor. Other than the clever way of teaching you how to use key items, with the fake book in Mr Smith’s home, the game basically throws up screens full of text about almost every system in the game. Instead of having the player run through various scenarios to dynamically teach us how to deal with individual gameplay mechanics, an info dump is used and it makes it easy to miss important things. It’s frustrating to have to go into the “help” section of the pause menu, to refresh your memory on things that would likely be second nature, had the game intelligently taught us how to play.

To be fair to developer Gloomywood, the gameplay is actually quite good once you’ve gotten a grasp on things. The aim is to rescue any captive children at the current location, and to find evidence of the criminal activity there. But how you get to that end point is up to you. Do you go in and murder every baddie, or use the environment to take down the boss, or silently rescue every child and allow the gathered evidence to condemn the criminals to justice? Chances are, you’ll fancy your chances at the silent idea, before realising that it’s not really designed well enough for that, and you’ll inevitably resort to murdering everybody. Then, after the missions end, you discover that there are consequences to your actions. This leads to replay value, at least.

Stealth works quite well in 2Dark, with L2 allowing you to sneak around. Those deep shadows come in handy here; good hiding spots when NPCs come wandering by, but obviously you’ll be in a bit of a pickle if they’re carrying a flashlight. That said, the consequences of being seen aren’t always that bad. During one mission in a hospice, I was spotted by a guard carrying a nightstick, but I basically got him to follow me outside before shooting him. Because we were away from any people, the sound didn’t carry far enough to alert anyone nearby, and I was free to continue on. Enemies carrying guns, however, are a different story altogether. And the boss enemies are just bullet sponges, even worse than the regular enemies. Combat is very awkward, possibly to dissuade players from simply ignoring the stealth portion of the game, or possibly just because it’s not very good. The point remains that 2Dark is intended to be a stealth game, so full combat isn’t necessarily meant to be easy, but it should still work well enough and it just doesn’t. And, for some reason, there is no option to take out guards without killing them. Sneaking up behind someone with a crowbar or other blunt weapon, just results in their death, not to mention copious amounts of blood pooling underneath their bodies. Weirdly though, despite the attention to detail of persistent bloody footprints or drag marks, NPCs simply don’t notice them.

The AI certainly isn’t particularly intelligent in 2Dark, as you might have guessed. It does at least react to sound, so stomping around at running speed will cause NPCs to investigate where the sound originated from, which can actually be used to set up an ambush or get someone out of the way, allowing you to sneak around them more easily. When enemies do see you, they either shoot on sight (naturally) or run directly at you until they either catch and murder you, or you put them down yourself. But, like Hitman, there are sometimes other ways around the AI and your objectives. While not as comprehensive and open as IO Interactive’s games, 2Dark offers level-specific alternatives to combat/stealth, from disguises to unique ways to stop a boss in their tracks. It makes you stop and think about how to proceed, as long as you’re patient enough.

Patience really is required, too. Some levels can take upwards of an hour to complete, and that’s not taking into account pacifist runs or making sure you save every single child in the level. Weirdly, gathering evidence is the most important part of each level, not saving children. And that’s a big problem with 2Dark: it doesn’t treat the subject matter with respect at all. It only punishes you if you accidentally kill a child yourself, but if one is murdered by a psychopath through your inaction (or ineptitude), it just means you won’t get a little “objective complete” checkmark at the end of the level. It never really feels like a serious game, more like a daft slasher film from the Eighties. 2Dark is a good idea, with an interesting mixture of horror, thriller and stealth action genres all rolled into one. If its story ever managed to deliver on that opening cinematic, it would be a lot easier to overlook its awkward inventory and design issues, but it just never clicks. It tries to go for a noir-like aesthetic, including having to smoke a cigarette in order to save (do it too much and you’ll die though, which is a strange inclusion), but again, it falls short by some margin.

At the right price point, 2Dark could be an interesting curio. Its flaws might have been more forgivable. I know price shouldn’t really affect your enjoyment of a game, but when it’s twice the price of smarter horror games like Resident Evil HD and Lone Survivor, and is more expensive even than the Amnesia Collection, you can’t help but see its faults all the more clearly. And 2Dark is a game chock full of faults.

Interesting visual style
Some nice use of stealth and shadow

If 2Dark’s tone was in line with its subject matter, it might have been something worthy of recommendation. But its story is almost nonexistent and nothing quite works as intended.

2Dark is horror set in the recesses of human depravity